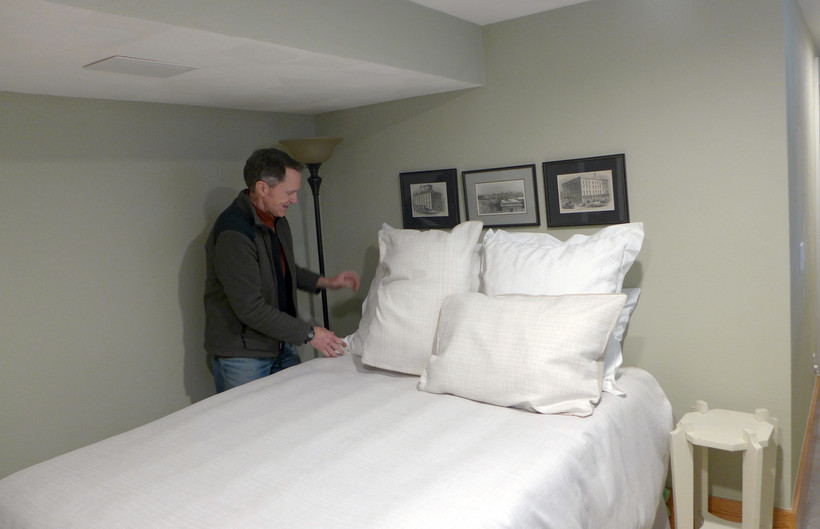 Peter Daly has rented out the basement of a Madison home he owns using Airbnb. Daly supports the city contracting with Airbnb so the online company can collect room tax from users that's then given to the city.

Madison Could Ink Deal With Airbnb To Collect Room Taxes

Madison could become the first city in Wisconsin to collect room taxes from Airbnb through the short-term rental company's website.

An estimate using city of Madison figures shows Madison might be missing out on as much as $270,000 in potential tax revenue a year because less than 20 of the estimated 400 Madison rentals listed on Airbnb pay the city's 9 percent room tax — which hotels and bed and breakfasts are obligated to pay.

Online rental company's such as Airbnb or VRBO (Vacation Rentals By Owner) let travelers book a room, apartment or house for a vacation. A 2013 city ordinance requires people who host rentals, characterized as "tourist rooming houses" in the ordinance, must be licensed and undergo yearly health inspections and pay the 9 percent room tax.

But city officials are having a hard time finding and regulating Airbnb rentals in Madison because some are not licensed or even include an address of the property on the online listing.

Mayor Paul Soglin said he wants to prevent unregulated "hotels" from operating under the radar in residential neighborhoods. There have been few complaints, but Soglin is concerned lucrative, short-term rentals will reduce affordable long-term housing.

Attempts to get host licensed and paying room tax won't include penalties. "Our goal is education and compliance," Soglin said ahead of the Madison Common Council vote Tuesday on whether to enter into a contract with Airbnb to collect the room tax.

Madison wouldn't be the first city to work with Airbnb to collect said taxes, New Orleans has done this and Green Bay is considering doing so.

Airbnb stands to gain through agreements like these, said Hart Posen, an associate professor of management at the Wisconsin School of Business on the University of Wisconsin-Madison campus.

"I think it is undoubtedly true that Airbnb has finally figured out that their goal is not to thwart regulation but to use regulation to strengthen their position the market," Posen said.

The common council could vote at a later date on a proposal to hire a company to find tourist rooming houses through Airbnb and other sites like VRBO that are not licensed.

"We don't have staff to go out and try to hunt down and find these," Matt Tucker, city zoning administrator, said of the unlicensed rentals. "That's why we're trying to hire a third party for investigations." Peter Daly talks in the basement of a Madison home he owns and rented through Airbnb. Shamane Mills/WPR

Finding hosts can be a game of cat and mouse. Hosts may not know they are required to a pay room tax or choose not to. But even those who attempt to get licensed under the city ordinance regulating short-term rentals think hiring an outside company to track them may be heavy handed.

"My first reaction is that seems nasty," said Peter Daly, who said the city should welcome Airbnb hosts as entrepreneurs.

"If we want to chase everybody out of town, the tourists along with the Airbnb hosts, then bring in the army. Then go further and clear us all out," Daly said.

Some have characterized the agreements between Airbnb and cities as Airbnb "writing their way to legitimacy."

"There’s no way the rules and regulations that govern taxis and hotels could have envisioned what we are doing today," Posen said. "It is necessary that those regulations adapt to fit current technological and economic circumstances."

Posen said it's good the old and new conflict as society tries to shape regulations in a way that's best for all: neighbors of Airbnb homes; visitors and hosts, like Daly, who has advertised on Airbnb, supports Airbnb collecting city room tax from renters.

"I actually like that idea as a host, because it simplifies my bookkeeping, makes it upfront to my guests that there are taxes to be paid," Daly said. "Here it is, as a line item, and when they pay their bill through Airbnb, they know they are paying taxes."

Right now it's all hidden, much like the under the radar rentals that city officials have trouble finding, Daly said.

Airbnb has 3 million listings worldwide in 65,000 cities in more than 191 countries, according to the room-rental's website.