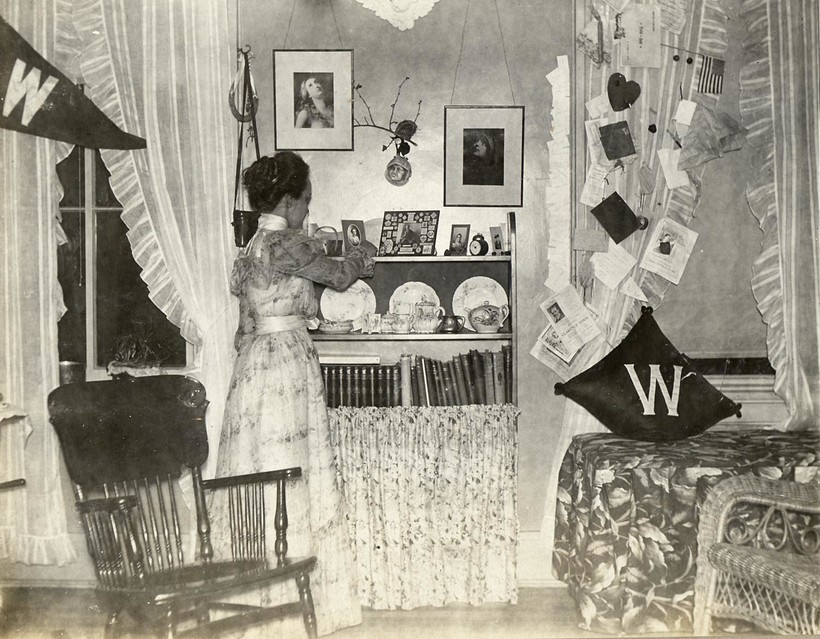 A Look At Dorm Life In 19th-Century Wisconsin

Though students may not bring their tea sets to college anymore — as Lelia Bascom did in the above image of her room in the old Chadbourne Hall at the University of Wisconsin in 1899 — the college experience has long been associated with dorm life.

For centuries, universities were built around massive libraries. Early dorms were imposing structures designed to separate students from the outside — noneducational, vice-ridden — world. The male students that traditionally occupied these rooms were subject to strict rules and routines, often enforced by dorm mothers.

Male students took up residency in the University of Wisconsin’s North Hall in 1851. Among the hall’s most famous residents in its early years was John Muir, who decorated his 1860s dorm room with some of his inventions designed to maximize his college experience. One was a combination bed/alarm clock that tipped him onto the floor at an appointed hour each morning and struck a match to light up the room. Another was a rotating desk that lifted his textbook from a stack, opened it to the proper page, and left it there for a preset time before replacing it with the next book.

A second dorm, South Hall, opened in 1855, and became the first female residence hall in 1863 when the first women were admitted to the UW. The student above, Lelia Bascom, benefited from the actions of her distant cousin, former UW President John Bascom, the man primarily responsible for giving women full coeducational status at the UW in 1863. It was a move steadfastly opposed by one of Bascom’s predecessors Paul Chadbourne, who later, in a most fitting bit of historical humor and revenge, became the namesake for the building housing female students. When the original Chadbourne Hall was demolished in 1957, it was the oldest women’s dorm in the United States.

See more photos of dorm life — and its evolution — in this wonderful gallery from the University of Wisconsin-Madison Archives.