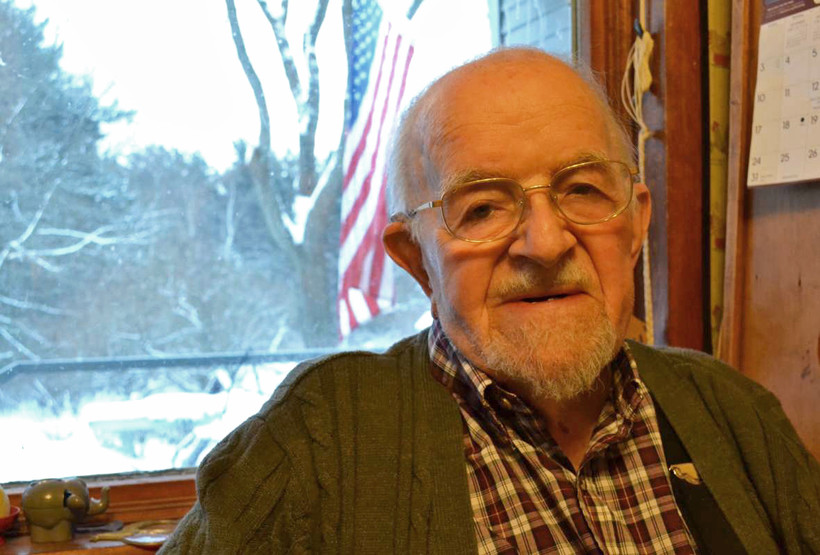 Walter John Chilsen, 94, sits at his kitchen table in his Town of Weston home. Glen Moberg/WPR

Longtime Wisconsin Lawmaker And Broadcaster Retires From Politics At 94

A former Wisconsin lawmaker and hall of fame broadcaster is retiring from politics at the age of 94.

Republican Walter John Chilsen served for 24 years, from 1966 to 1990, in the Wisconsin state Senate, following a career as the first news director and anchor for WSAU-TV, now WSAW-TV in Wausau.

He ran unsuccessfully for Congress in 1969 against Democrat Dave Obey, who called him "the Walter Cronkite of central Wisconsin."

Chilsen is retiring in December after serving 17 years on the Town of Weston Board of Supervisors.

"I suppose the fact that I hear so many people say, 'Walter John we need you back in the state Senate,' is one of the most rewarding things that can happen," Chilsen said in the kitchen of his Weston home. "And I say, 'No way!' I don't want to be down there at all with the kind of viciousness that's going on right now."

Chilsen said he is concerned Republicans and Democrats no longer try to compromise, and that lawmakers now often prohibit staff members from associating with people in the other party.

"We argued on the floor, harshly many times, but then we got together and had a drink together, and visited," he recalled. "On reflection I think I have more long-lasting friends who are Democrats than Republicans."

At 94, he is not afraid to criticize his own party.

"The big complaint right now against Republicans is that they're showing too much favoritism toward the ultra-wealthy, and it may be true. I don't know why the ultra-wealthy couldn't be taxed much more heavily," Chilsen said.

Along with favoritism to the wealthy, Chilsen thinks there it too much money in politics — something he blames on Citizens United, a landmark U.S. Supreme Court ruling dealing with the regulation of political campaign spending by organizations.

"When I would run for re-election we'd spend $40,000 dollars and that's one-tenth of what a lot of (candidates) spend now," he said. "Some of them at the state level have spent over $1 million."

"I think he's bewildering. With many of his tweets, he shows a lack of understanding of what a president should be," Chilsen said. "I'm extremely disappointed that he is the leader of the Republican Party ... He seems to think he can run the government the way he became a multi-billionaire."

As a former news man, Chilsen is also highly critical of some of today’s reporters, who he believes do not follow the same ethical standards he did as an anchor in the 1950s.

"I've seen reporters on television being abusive, unfriendly, uncooperative and so strongly opinionated," he said.

Chilsen said he missed the camaraderie at WSAU when it was the only television station in Wausau.

"We had great pride in what we were doing," Chilsen said.  "All the people that were on the air, and all the technicians as well, were one happy family."

Chilsen was inducted into the Wisconsin Broadcasting Museum’s Hall of Fame in 2005.

He said he worries about the future his eight children, 12 grandchildren, and three great-grandchildren could face.

"I'm very apprehensive of what is going to happen. Every dominant country in history has faded," he said. "I see a short life for the great government we've had unless something can be done about making government more responsive to the people and answer to their needs in a more constructive and fair way."