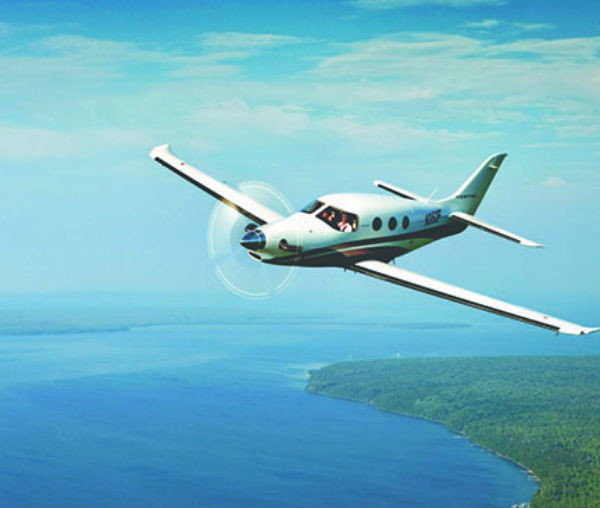 Bankruptcy Proceedings Ongoing For Company That Said It Would Create Hundreds Of Jobs In Superior
By Danielle Kaeding
Share:

City and county leaders in northern Wisconsin hold out little hope they’ll recover most of the money they awarded to a now-bankrupt aircraft company as part of plans to build a plane manufacturing facility in Superior.

Kestrel Aircraft Company and its parent company ONE Aviation Corp. filed for bankruptcy last October along with 10 other subsidiaries. At the time of filing, the New Mexico-based business listed a total debt of more than $198 million. Of that, the company owes $53 million in loans to state and local governments, including around $3.4 million to the Wisconsin Economic Development Corp.

In 2012, Kestrel pledged to create 600 jobs in Superior in what was billed as the city’s largest job creation project since World War II. The city’s redevelopment authority loaned Kestrel $2.6 million and Douglas County provided a $500,000 loan through its revolving loan fund. As of last fall, the company owed the city $1.7 million and Douglas County $479, 421, according to court documents filed in Delaware.

"We gave them money in the hopes that they would (create jobs). They used that money. They invested in some things. I’m sure they intended to build airplanes, but (it) didn’t work out," said Superior Mayor Jim Paine. "Now, we don’t take risks like that anymore."

The Wisconsin Housing and Economic Development Authority also planned to help Kestrel obtain $90 million in tax credits. The economic development deal was awarded $4 million in state and federal loans through WEDC. The project was among those funded without proper review in the early years of the public-private job creation agency implemented by former republican Gov. Scott Walker, according to a state audit.

Paine said he calls Kestrel the grandfather of the state's controversial deal with Foxconn Technology Group.

"It was all the same actors and the structure of the deal is exactly the same except for the scale," said Paine. "It was this idea of the government taking out massive amounts of debt to award massive amounts of upfront cash to a big corporation on the promise that they would build something."

Foxconn signed a deal two years ago with the state to spend up to $10 billion on a manufacturing facility in southeast Wisconsin and create as many as 13,000 jobs in exchange for around $3 billion in economic incentives. The Milwaukee Journal Sentinel reported the company recently reaffirmed its commitment to create thousands of jobs as part of its plans.

Records show the electronics manufacturer did seek $200 million in upfront payment from that incentive package, according to the Wisconsin State Journal and Associated Press. However, state officials rejected that idea in favor of an agreement that requires the company to reach benchmarks on construction and hiring in order to earn the tax credits awarded. Steve Michels, then-spokesman of the Department of Administration, said the records showed "the state's extensive due diligence" on the deal.

Gov. Tony Evers told CNBC in early July that the company will likely fall short of its hiring goals for next year.  Evers said earlier this spring that the state's contract with Foxconn would likely need to be renegotiated after the company changed the type of factory being built in Mount Pleasant. But, Mark Hogan, chief executive officer of WEDC, defended the state's agreement with the Taiwanese company.

A review by the nonpartisan Legislative Audit Bureau in May showed ongoing concerns with the state's public-private job creation agency. An LAB audit said companies that received tax credits and loans during the fiscal year ending in June 2018 only created about 35 percent of required jobs.

With Kestrel, the state signed off on the deal despite the risks. Although, as WPR has previously reported, documents show WHEDA was concerned about the company’s financial status and its failure to meet reporting requirements with another development project in Maine.

"We always knew there (were) risks," said Mark Liebaert, chairman of the Douglas County Board. "But, if this thing would’ve succeeded, it was too good not to have tried."

City and county officials also had faith in Alan Klapmeier, CEO of Kestrel and ONE Aviation. He had a reputation built on the success of Cirrus Aircraft in Duluth, which he co-founded with his brother Dale Klapmeier.

However, Liebaert said the project encountered challenges from Kestrel and the state agencies that pledged support for the project.

"Money that was promised wasn’t provided at the right time, which caused private investors to balk and walk away," said Liebaert.

However, state officials have said in the past that delays in financing occurred because Kestrel had to show it had the collateral to back the deal, which the company had already offered for its previous production project in Maine.

WEDC announced it was pursuing legal action against Kestrel in October 2017 after the company failed to make loan payments. In June of last year, the agency filed a civil lawsuit with the city and county to recover their loans. The suit was dismissed in November with the right to re-open if any bankruptcy case is dismissed or closed, according to Dane County court documents.

"As a creditor, WEDC is attempting to recover funds through the bankruptcy process," wrote WEDC spokesman David Callender in an email. "It will be up to the bankruptcy court to determine whether or how much WEDC will be repaid. WEDC’s claim in the bankruptcy is based on the $4 million in loans that Kestrel received from the state."

Bankruptcy proceedings are ongoing. In June, the acting U.S. trustee in the case motioned to dismiss the company’s reorganization plan. Klapmeier, who declined to comment to WPR, told Aviation International News that the company believes it will successfully emerge from bankruptcy.

Meanwhile, Superior’s mayor said the city has already resolved its debt from the loan awarded to Kestrel, which Paine said has been paid off through the city’s capital improvement fund. Liebaert said the county’s revolving loan fund is healthy with a balance of roughly $1.5 million as of April this year.

But it’s unclear what, if anything, state and local governments will emerge with from the bankruptcy filing.

"If the city attorney’s office or outside legal counsel manages to score some money out of a settlement at some point down the road, we will treat that as bonus revenue," said Paine. "For us, the books are closed on Kestrel."

Editor's note: This story has been updated to provide further context and clarity on the state's incentive package awarded to Foxconn.

People In Wisconsin Are Being Arrested, Charged For Violating Stay-At-Home Order
Returned To Sender: Postal Officials Investigating Wisconsin Absentee Ballots That Were Never Delivered
More Than 1M In Wisconsin Vote By Mail, But Full Election Turnout Still Unclear
Live: What To Know April 9 About COVID-19 In Wisconsin
Coronavirus Continues To Hit Hard In Milwaukee