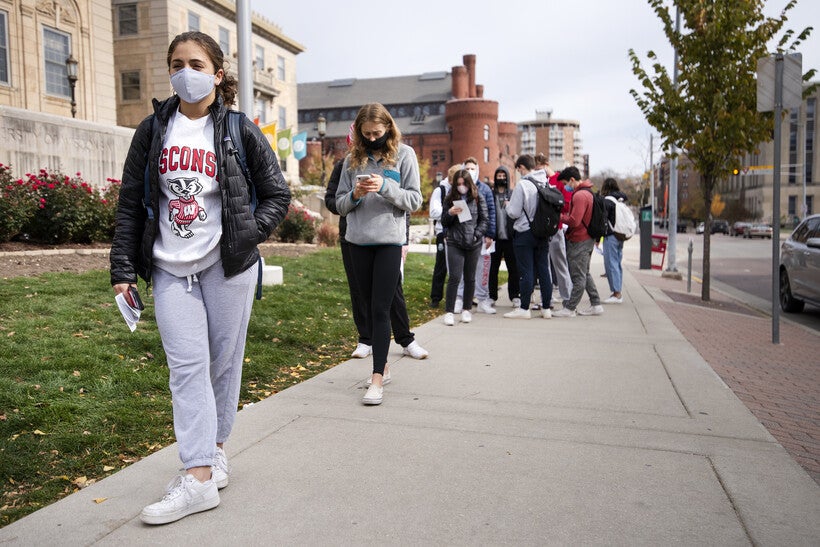 UW-Madison student Avery Selz, left, waits in line to vote early Tuesday, Oct. 20, 2020, on campus. Selz is voting for the first time after turning 18 in the summer. Angela Major/WPR

As Coronavirus Surges, Many Have Also Chosen To Vote By Mail
By Megan Hart
Updated:
Tuesday, October 20, 2020, 3:55pm
Share:

In Milwaukee, there were lines Tuesday morning at all 14 absentee voting sites, according to Mayor Tom Barrett.

"Without a doubt people are interested in voting for the Nov. 3 election," he said outside a polling location in Midtown.

Early voting makes it easier for workers, parents with limited childcare options and seniors with limited access to transportation to cast their ballots, Barrett said.

The coronavirus pandemic has created uncertainty for many Wisconsinites. But Barrett said they can trust Milwaukee’s early voting sites will be safe, thanks to a "marriage" between the city’s elections commission and public health officials.

A sense of the line at Midtown. pic.twitter.com/zp5Uxqyq5w

People wore masks and spread out as they waited in line at the polling site where Barrett spoke. After seeing how long lines were Tuesday, the Department of Public Works will add additional signage outside of polling sites to encourage social distancing, Barrett said.

Voters are being asked to use pencil erasers instead of their fingers on the touchscreen voting machines, because it's easier to sanitize them, said Claire Woodall-Vogg, executive director of the Milwaukee Elections Commission.

Milwaukee had just three early voting sites for the 2016 election. This year’s 14 sites were chosen for geographical diversity, Barrett said. Absentee voting will also be held at the University of Wisconsin-Milwaukee and Milwaukee Area Technical College to make it easier for students to cast their ballots, he said.

In total, the city will offer 1,092 hours of operation at early voting sites, Barrett said, "so you don’t have to rush out today." 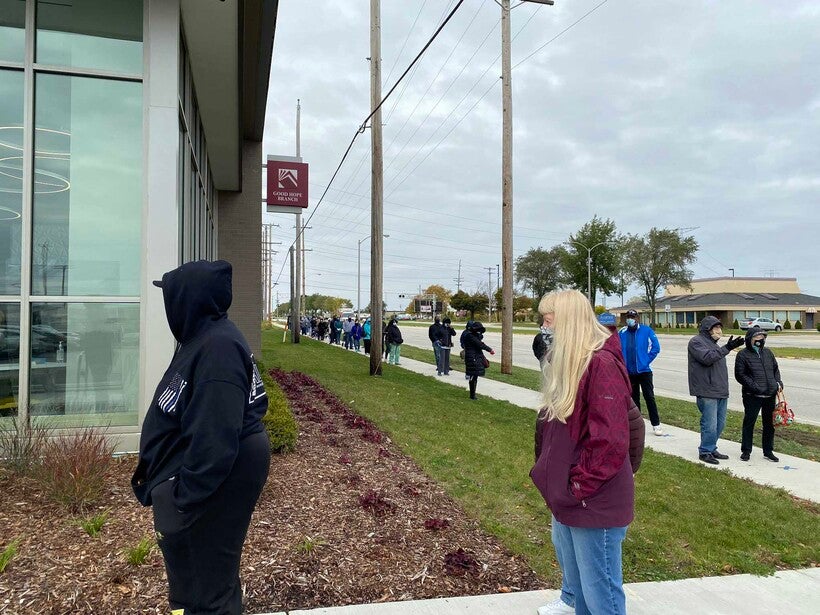 Jason Mims waited more than two hours Tuesday morning to vote at the Good Hope Library branch in Milwaukee. He said he voted early to avoid long lines on Nov. 3, but still found them.

"I think people feel that (in) this election, more than other ones, their voice really matters, from what they saw in the (April) election," Mims said. "And they are seeing the impact (of) when your voice doesn't count, what will happen with the country. And they want to make a difference."

Suzanne Freshley said waiting two hours at the library was worth it. For this election, she wanted to vote in person, and she wanted to do it early.

"I was committed to coming the first day of voting. I even have my mail-in ballot, but I wanted to be here to have my ballot counted right here," Freshley said. "I certainly trust the post office, but I don't trust what's going on in the process right now. You know, I just want to be sure my vote is counting."

Dorothy Howard said she always votes, but this election is different, because of the economy and the reckoning over racial injustice that has taken place across the country.

"It's much different than I have ever saw," Howard said. "The line has been so long, but I'm going to stay and wait it out. On (Election Day), it might be more congested. It might be raining, it might be snowing, we don't know what the conditions will be. So I'll take my chances right now."

In the April primary election, some voters in Milwaukee and Green Bay waited more than four hours to cast their ballots due to the limited number of polling sites. Officials from both cities say they don’t want a repeat of that in November.

In Green Bay, 30 percent of registered voters have already returned their absentee ballots by mail or through the city’s new drop boxes, according to Mayor Eric Genrich. Wisconsin’s third-largest city has just one early voting location, where the line ran down the block Tuesday morning.

Like De Pere, @AshwaubenonWI early voting line is entirely inside. Clerk P. Moynihan estimates more than 100 ballots have already been cast since 8 am. pic.twitter.com/eA4QrYJsc1

By the afternoon, voters were waiting about 90 minutes to cast their ballots at Green Bay's City Hall. Volunteers waited outside the building with water bottles and hand warmers. They said they didn't represent a particular organization, but just wanted to make sure voters felt safe and comfortable. 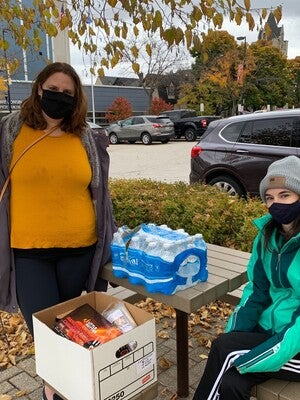 On Oct. 20, 2020, the first day of early voting in Wisconsin, volunteers outside of Green Bay's City Hall offered voters hand warmers and water bottles as they waited in line. Megan Hart/WPR

Early voting lines also formed in Madison Tuesday morning, where 13 polling sites are open. Voters at the Madison City Clerk’s Office waited about an hour to cast their ballots, according to the Milwaukee Journal-Sentinel.

Across the country, there have been long lines for early voting. In Florida, where early voting began Monday, more than 350,000 people have already cast ballots in-person. In Texas, Houston Public Media spoke to voters who waited up to four hours to get to the front of the line.

Wisconsin law prohibits election clerks from counting absentee ballots until the morning of Election Day. Given the large number of ballots cast by mail and at early voting sites, it could mean election results are delayed.