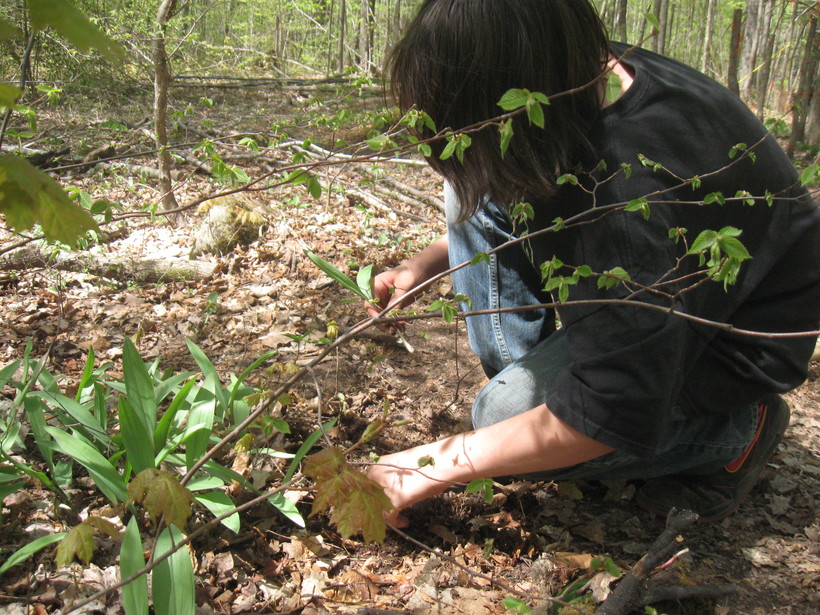 The Lac Courte Oreilles tribe is trying a unique way to help stop the proposed iron ore mine in the Penokees: gathering wild onions and mushrooms.

The new LCO Harvest Camp is set in the backwoods of Iron County, right in the middle of the proposed mine.

"Right here, we're just building a little wigwam right there and right here is where one of our campers are staying. A little farther back is where we're building more campsites. Pretty nice here. Peaceful. I don't know where this leads, but let's explore!"

The five-acre camp is tucked away in an Iron County forest. There's no cell phone service here, but there are campsites, trails, wigwams, a community kitchen and lots of young people. Twelve-year-old Mikey DeMain of LCO likes working at the camp.

?"Yeah. I helped 'em make some wigwams, helped collect firewood and stack it. Think I'm going to hang out there a lot this summer."

"You can learn about mushroom gathering, plant medicines, wigwam building. There's ironwood up there. There's basket weaving with birch bark. There's people fishing. There are people doing all kinds of beautiful things and it is so healing. That's ultimately what it was: The idea of, 'How can we help mend our communities and come together?'"

This camp is on top of the largest iron ore body in North America with the potential to create hundreds of jobs. But Wisconsin tribes say it would destroy this pristine land.

So this spring, the Lac Courte Oreilles Band of Lake Superior Ojibwe Governing Council voted to designate this spot as a harvest camp. They have that right under the Treaty of 1842 - to hunt, fish and gather. The treaty ceded the land to the U.S. Government in exchange for that right.

And Gasper says there's another reason. It's to stop the mine.

DeMain says the mine would poison the Lake Superior and Bad River reservation watershed, so it's time other tribes join the fight.

"If there are people from some indigenous nation who has relationships to the land up here who want to go camping up at Mount Whittlesey at Eagle's Peak or on the crest and occupy the range, that's up to them. What we've tried to do is establish a legal framework in which we can exist here and coincide with what's there now and monitor the situation."

DeMain says LCO is deliberately getting in the way of Gogebic Taconite, which is currently drilling exploratory bore holes.

"Bad River seems to be taking the brunt of the battle on this mining legislation and organizing it. Frankly, people get tired and they feel beaten up, so there are other tribes who are saying 'How can they contribute to this way?'"

So, they've built this harvest camp. Elder Gasper says even as they pull wild onions from the ground, they are effectively occupying this area.

"Most definitely it is. They were asking us basically 'How do you protest?' This is a brand new way. It's a peaceful manner in which we are using as a harvest area and showing what can be taken out of this and saved. Some of us have given our whole lives to fight for the cause and stop mining."

Gasper says his ancestors sacrificed for him, now he's doing the same for Mikey and Connor and future generations.