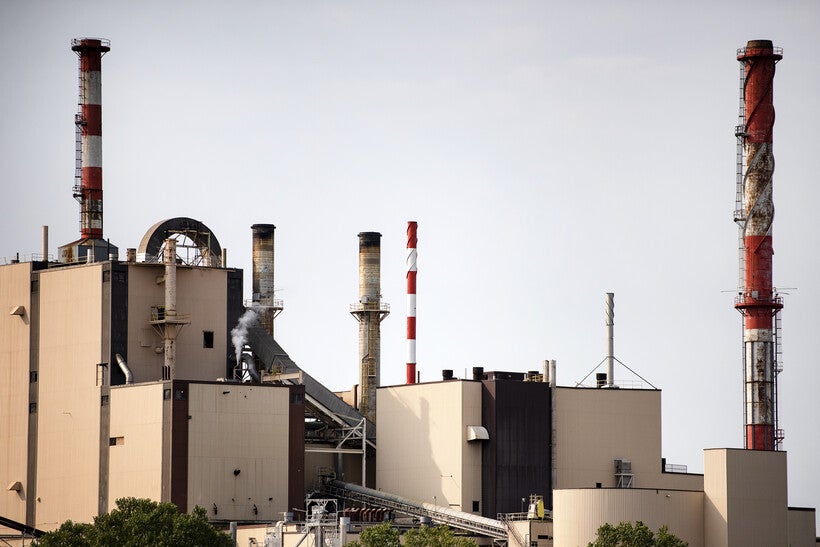 The 2 idled mills together employed more than 1K workers. Cold weather threatens irreparable damage to both.
By Rob Mentzer
Share:

A bill lawmakers hope will help two closed paper mills reopen faces a critical vote Monday. And if the bill fails to pass in the next 10 days, the consequences for the mills could be "catastrophic," says one advocate.

Mills in Wisconsin Rapids and Park Falls are both idle, meaning they aren't in production but are being maintained by small crews. But as winter looms, there is potential for irreparable damage to the large, complex machinery if their owners don't keep the heat on.

And in Park Falls, there's another threat: liquidation. Without action, that mill's owner is set to auction off its parts Nov. 17.

A new bill would fund a $15 million state loan toward the purchase of the Park Falls mill in a last-ditch effort to prevent that auction. It would also fund a $1 million loan to Verso, an Ohio-based company that owns the Wisconsin Rapids mill, to ensure the company would keep the heat on and preserve its machinery.

An Assembly committee will vote on the bill Monday; it's scheduled for a vote in the full Assembly on Thursday. The state Senate is also in session through Thursday and could take up the bill. The legislative session ends this week.

Lawmakers, community leaders and a union representative stressed the importance of quick action at a recent public hearing on the bill.

"The rumors are that the current owners are not interested in the cost of maintaining heat any longer into the winter," said Rep. Scott Krug, R-Rome. "That would render those machines virtually useless after winter freeze."

In Park Falls, the cold weather is also a concern.

"This morning ... it was 20 degrees in Park Falls, and the mill is not being heated," Park Falls Mayor Michael Bablick said in the hearing. "For now, they're doing supplemental heat. Something catastrophic is definitely going to happen soon if this bill is not advanced."

The two mills both have a history that stretches back more than a century.

The Park Falls mill opened in 1896; Wisconsin Rapids’ mill opened in 1904. The Verso mill is much larger of the two: About 900 workers were laid off when it went idle in July 2020 — a closure that sent shockwaves through the community and has had devastating consequences on the state's logging industry. The smaller Park Falls mill employed about 180 people. It's had a troubled recent history: Since 2019, it's closed, reopened and closed again, only to be purchased in September by a liquidator.

Flambeau Paper Company is the former owner of the mill in Park Falls. Wisconsin Department of Natural Resources (CC BY-ND)

The new legislation is the latest attempt at a "mill bill" that would fund state loans to help the facilities. In July, an effort to fund a $15 million state loan for Park Falls and a $50 million loan for the Verso mill failed over a partisan disagreement about how to fund the loans. Democratic Gov. Tony Evers vetoed a bill written by GOP lawmakers because he said it might not be legally allowable to use federal COVID-19 funding to pay for the loans. In his veto message, he called on lawmakers to pass a new bill using other state funds. This bill, which would fund loans from the Wisconsin Economic Development Corp. out of the state's general fund, does that.

After the previous bill failed, the private equity firm Atlas Holdings made an offer to purchase Verso. That offer is still in negotiations, which is why the new bill dropped the $50 million loan toward the purchase of the Verso mill.

"We are this close to a deal," Krug said in a statement, noting at least two buyers have expressed serious interest in the Verso mill. "I want us to do absolutely everything we can to make sure there is still a viable mill to do a deal on."

In Park Falls, the fact that the mill's owner is a liquidator would normally mean the machines would be scrapped and sold for parts, the building likely left vacant indefinitely. That's what has happened to shuttered mills across Wisconsin.

But because the city of Park Falls had placed stringent regulations requiring cleanup of the site in the event of liquidation, the new owner has indicated willingness to sell it back to investors who would operate it as a mill — if they act in time.

Lawmakers say securing the state loan for the investors' group is that mill's last chance. If the liquidation process begins, the mill can't come back.

"That's why this is so very important," said Rep. Rob Swearingen, R-Minocqua. "Once he starts recycling, it's gone."

Representatives of an investment group seeking to purchase the facility spoke at the legislative hearing to make the case that their plans to restart the Park Falls mill are viable. The facility would likely be retooled to make "brown paper" or packaging paper, for which there is growing demand.