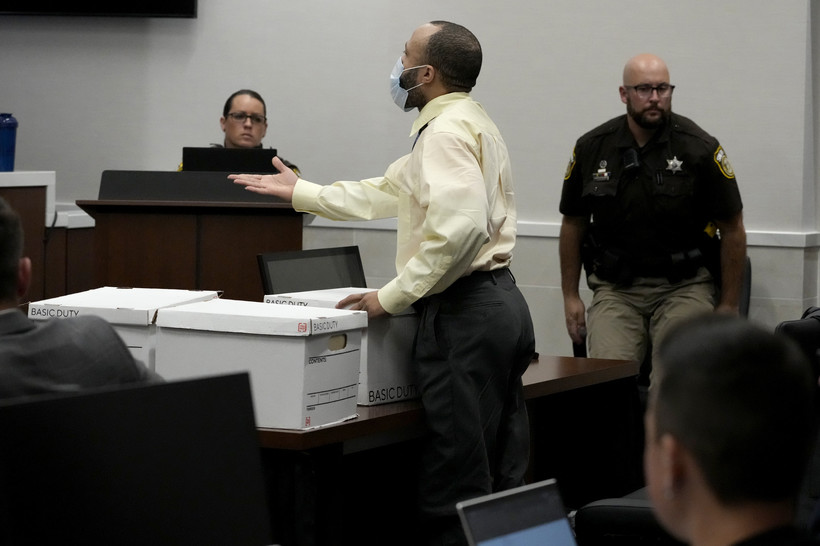 Darrell Brooks argues with the judge before being removed to an adjacent courtroom during his trial in a Waukesha County Circuit Court in Waukesha, Wis., on Monday, Oct. 24, 2022. Brooks, who is representing himself during the trial, is charged with driving into a Waukesha Christmas Parade last year, killing six people and injuring dozens more. Mike De Sisti/Milwaukee Journal-Sentinel via AP, Pool

What questions do you have about the state Department of Corrections, prisons and justice system? Share them with us.

The proposal would allow judges to consider a person’s criminal history, among other factors, when determining whether and how much bail to impose. Its supporters argue it would prevent people charged with crimes from returning to their communities and reoffending. Opponents argue it penalizes only those unable to afford to pay their way out of jail.

If approved by lawmakers this session, the proposal would head to voters.

Currently, cash bail can only be imposed in Wisconsin if "there is a reasonable basis to believe that it is necessary to assure the appearance of the accused in court."

At Tuesday’s joint hearing of the Senate Committee on Judiciary and Public Safety and the Assembly Committee on Judiciary, proponents of the changes argued the proposed amendment would allow judges to look at "the totality of the circumstances," including a person’s previous convictions of violent crimes.

The amendment’s co-authors, Sen. Van Wanggaard, R-Racine, and Rep. Cindi Duchow, R-Town of Delafield, said lawmakers have been working to change the state’s approach to administering pretrial bail since 2017.

But the issue received renewed attention after the Waukesha Christmas Parade tragedy of 2021, where Darrell Brooks Jr. killed six people and injured dozens when he drove an SUV into a crowd while out on $1,000 cash bail for prior crimes.

"While Darrell Brooks and the Waukesha parade murders are the highest profile incident, it is not the only time violent criminal(s) have committed an additional violent crime while on release or on bail," said Wanggaard.

Opponents of the amendment argued that cash bail essentially amounts to a penalty for poor defendants that would not equally affect defendants who have the means to pay their bail. This exacerbates class and racial divides in incarceration, they argue.

"This is making sure that people who are poor will not be able to be released," said Sen. Chris Larson, D-Milwaukee.

Opponents of the amendment call for a risk-based assessment of a person’s likelihood to reoffend. Under such a system, a person would remain detained if they pose a risk to public safety, regardless of whether or not they can pay to get out of jail.

"Why are we not taking money out of the equation entirely?" asked Larson. "The money had nothing to do with (Brooks’ crime.) He shouldn't have been released."

The proposed amendment comes amid a wave of changes to bail systems across the country, as Wisconsin lawmakers — both proponents and opponents — pointed out in Tuesday’s hearing. But many states, including Illinois, New York and New Jersey, have limited, not expanded, their bail systems.

The amendment’s authors argued that the changes to Wisconsin’s constitution would bring the state "in line with the rest of the country," as Wanggaard put it.

"Our bail system is the most restrictive among the states, and the public pays the price," said Wanggaard.

Proponents also point to a nationwide increase in crime rates. After decades of decline, rates of violent crime crept up during the COVID-19 pandemic. Experts differ about the causes of the surge, with some pointing to loss of mental health services, employment and enrichment opportunities for youth.

Proponents of expanding the state’s cash bail system say it will offer judges another resource when determining what to do with a person charged with a detainable offense. It also would hold judges’ feet to the fire, Duchow said, if they allow a person back into the community who goes on to reoffend.

"The judge still has the opportunity to set bail at a dollar, or at a million dollars," she said. "All this is another tool to help them make a good decision."

In 1981, following the violent murder of a young Wisconsin woman, voters overwhelmingly approved a change to the state’s constitution meant to keep the most violent criminals detained without an option for pretrial release.

But another clause in that amendment restricted the factors that courts could consider when imposing bail. Consequently, judges have not been able to weigh a person’s likelihood to reoffend when applying bail, said Waukesha County Deputy District Attorney Michael Thurston, a supporter of the plan.

Dangerousness, under this proposal, could be determined by assessing previous felonies, the risk that a person will commit serious harm to community members or witness intimidation, and flight risk.

But Adam Plotkin, legislative liaison with the State Public Defender Office, which provides legal counsel to indigent Wisconsinites, said that the proposal simply splits offenders into two camps: those who can pay bail and those who can’t.

"We’re equating cash with public safety, which is a false equivalency," he said. "When you have two similarly situated people who are both charged with the same crime, but one of them has financial resources, and the other does not, why is the person who is able to purchase their liberty pretrial less risky than the person who cannot?"

Plotkin argued a better system would release a person based on whether they were at risk of reoffending, rather than if they have money for bail.

"Risk is a better predictor of public safety than cash," he said.

Other states have taken different approaches to bail

Nine Wisconsin counties are currently part of a pilot program to use a public safety assessment tool, Plotkin said.

In theory, such a system would have prevented Brooks, the perpetrator of the Waukesha tragedy, from being released, based on his prior felony convictions, rather than his ability to pay a cash balance.

But in practice, that risk management system reportedly failed with Brooks. According to reporting by Wisconsin Watch, "a series of mix-ups" led Brooks to be released from jail on "an unusually low cash bail."

The prosecutor in that case did not have access to Brooks’ risk assessment, which would have identified him as high-risk and in possession of multiple prior felony convictions.

Milwaukee County District Attorney John Chisolm has since launched an internal investigation into the failures that left Brooks facing such a low bail amount.

Wisconsin is not the only state reconsidering its approach to cash bail, although many others are heading in the opposite direction.

The state of Illinois passed a "Pretrial Fairness Act," which eliminates cash bail for low-level, nonviolent offenders not believed to be a flight risk or danger to the community. Illinois' law is currently on hold while it's being challenged in court.

New York restricted use of cash bail in 2019, ending it for most misdemeanors and nonviolent felony offenses. Opponents of that change argue it caused New York City’s pandemic-era crime increase, although no data clearly makes that connection.

In Wisconsin, a constitutional amendment must be approved by two consecutive legislatures. The amendment is currently on its second consideration, having been approved in 2022.

If approved in this session, it could go before voters as soon as the April 4 election.