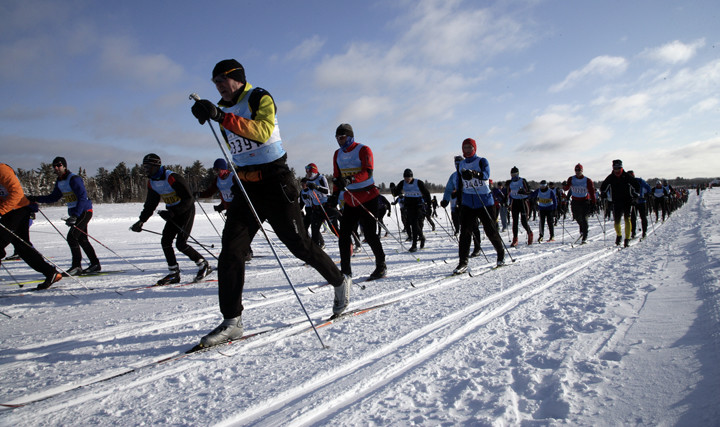 While some might be tired of what seems like never-ending snow, outdoor enthusiasts like Ben Popp, executive director of the American Birkebeiner Ski Foundation, sees a chance to boost the economy.

He said this winter started out bleak.

"It was a little bit thin in December up to the first of the year," he said.

But then the area got huge snowfalls in February just in time for the American Birkebeiner, a ski race this weekend that bills itself as the largest cross-country ski race in North America.

Popp said the 50 kilometer — or about 30 mile — ski trail is in "fantastic condition" for the Saturday's race.

According to Popp, the heavy snow doesn't keep skiers away.

"I think it does the opposite, I think it pulls them in," he said. "They love the idea of fresh snow."

Popp said nearly 11,000 racers have registered for the race between Cable and Hayward in northern Wisconsin. Including spectators, he estimated 40,000 people would descend on Hayward, a town with a permanent population of 2,500.

A 2014 study by the University of Wisconsin-Madison Extension showed the trail had a $26.4 million economic impact on the region — a number that included mountain biking and skiing.

Popp said the race draws people come from all over the country and world, many of whom return later on.

"Many of the skiers from our survey, come back at least one time outside of the event," he said.

Others stay even longer.

"There is a large number of second homebuyers here (who are) driven by the trail, not just the lakes," Popp said.

Other skiers are also happy with how the winter is shaping up. Granite Peak Ski Area on Rib Mountain near Wausau is reporting very favorable conditions for downhill skiing.

Lisa Zilinsky, director of marketing for Granite Peak, said the mountain has been busy and has created a ripple effect on the township of Rib Mountain and on Wausau.

"We help out with all the hotels around. We help drive business to the restaurants, shopping areas all over," she said.

For those who would prefer to enjoy the outdoors without skiing 30 miles or hurling themselves down a mountain, Dave Newman, president of the Association of Wisconsin Snowmobile Clubs, said there's always snowmobiling.

The association represents more than 600 clubs around the state, with more than 40,000 individual members. Members volunteer to help maintain trails and in return get a reduced price trail pass.

Conditions on Wisconsin’s 25,000 miles of snowmobile trail are "awesome," Newman said, adding that the association doesn't track a specific economic impact, but that snowmobiling is "the biggest economic impact the winter economy has. The trail system is second to none."

Restaurants along the trails also keep busy throughout the season. Popp said a good winter means a longer season and more business for them.

Newman summed up the mindset of winter sports enthusiasts of all stripes: "We will always take more snow, the only bad thing this time of year is warm weather and thawing."