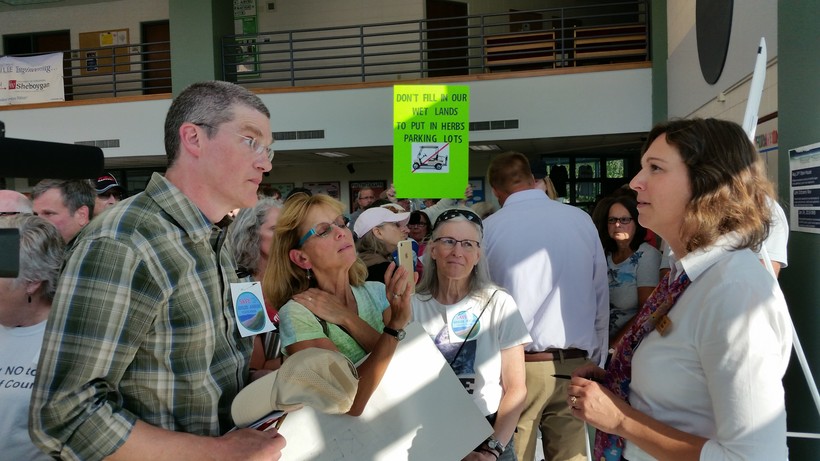 Dozens of people came to a Wisconsin Department of Natural Resources open house Thursday night, to raise concerns about the Kohler Co.'s plan to use part of a state park for a new golf course in Sheboygan County.

The DNR has started looking at amending the master plan for Kohler-Andrae State Park along Lake Michigan. Most of the golf course would be built on land Kohler owns. But the company says it needs about 5 acres of the park for a golf course maintenance shed and traffic roundabout.

Opponents like Mary Faydash of Friends of Black River Forest say it would be wrong to grant an easement to the company.

"This land belongs to the public, the state of Wisconsin. It is as much yours as it is mine, and the Kohler Company said, 'Well, we only want 1 percent of it.' Well, that's a pretty specious argument," Faydash said.

According to the DNR, many state parks have easements for utilities, rail lines and driveways for nearby private landowners. According to Kohler, it will provide a parcel of land of equal or greater value back to the state for public use.

The opponents also charge Kohler really wants about 20 acres of the park. But the DNR's Diane Brusoe said Thursday the agency's assessment is that company is asking for a 5-acre easement.

"It's based on the request that we received from Kohler, to have that roundabout coming in off County Highway V, having that access road up to the southern part of their property, and also to have an area for their maintenance facility. Calculating that acreage, that's what that number comes from," Brusoe said.

Many neighbors of the project say they're concerned about increased car traffic and water pollution. According to the DNR, it will hold a public hearing on the potential changes to the Kohler-Andrae master plan this fall. The Natural Resources Board would have to approve any changes early next year.

The DNR has yet to approve various permits for the golf course. Several federal approvals are needed as well.

Members of the Friends of Black River Forest say they're considering a lawsuit over the city of Sheboygan's recent annexation of part of the Town of Wilson, where the golf course would be built. The Kohler Co. supported the annexation after several years of battling town residents.