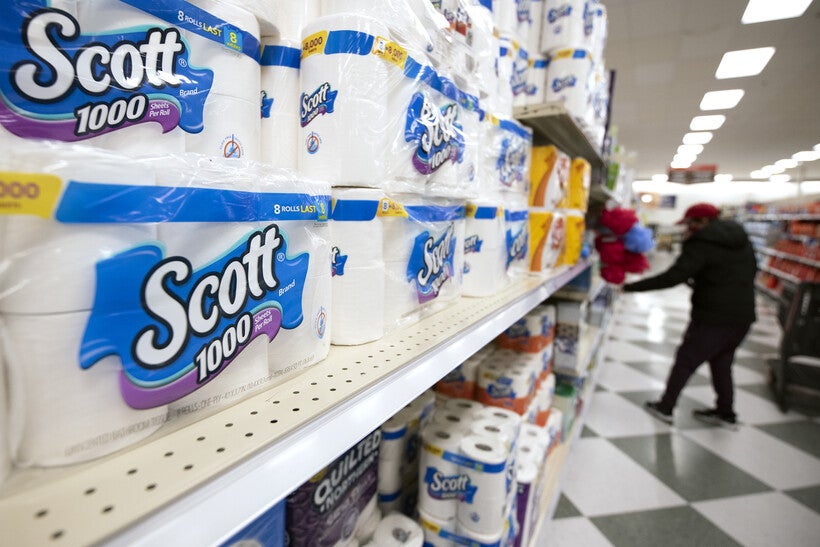 A customer shops for items near Scott brand toilet paper, Wednesday, March 31, 2021, at Schnucks grocery store in Janesville, Wis. Kimberly-Clark announced Wednesday it will raise prices on products like toilet paper and diapers, according to a press release from the company. Angela Major/WPR

Consumer products giant Kimberly-Clark announced Wednesday it will raise prices on products like toilet paper and diapers, according to a press release from the company.

The price hikes come as the company, which employs more than 2,500 people in Wisconsin, tries to offset increasing costs of raw materials. Prices for wood pulp, which is used to make tissue and paper products, started to increase in February after a steep fall that started in 2019, predating the COVID-19 pandemic.

In its 2020 fourth quarter earnings call, held in January, Kimberly-Clark CEO Mike Hsu said the company didn't have plans for broad-based price increases, but was planning "select pricing actions" across different markets the company sells in.

"Our goal is ... to drive margin expansion," Hsu said, responding to questions from Wall Street analysts.

Price Increases Could Be Coming Across Industry

Moses Altsech, an expert in consumer behavior at the University of Wisconsin-Madison's School of Business, said if the price increases are small enough, some consumers might not even notice.

Altsech added that the company might also not have to worry about their customers buying different products because Kimberly-Clark's competitors might take the opportunity to increase their prices, too.

"If commodity prices are the reason, the same reason that hurt Kimberly-Clark hurt its competitors, too," Altsech said. "So everybody's motivated to increase."

Companies that sell other kinds of consumer products, like General Mills and J.M. Smucker, have also announced plans to increase prices.

Customers in the U.S. and Canada will see price increases on the Kimberly-Clark's baby and child care products, adult care, and Scott toilet paper, with most of the increases set to take effect in late June.

The company operates four manufacturing facilities in the state, including one in Marinette that makes products under the company's Scott brand, and three others around Neenah that manufacture Depends, Poise, and Huggies products, among others. The company also has administrative offices in Neenah, including two research and development labs.

In 2018, the company announced plans to close two of its manufacturing sites in Neenah and Cold Springs amid a global restructuring effort. In a last-minute deal, then-Gov. Scott Walker awarded the company tax breaks in exchange for keeping its facility in Cold Springs open. The company's Neenah facility ultimately shuttered, while the Cold Springs site remains in operation.