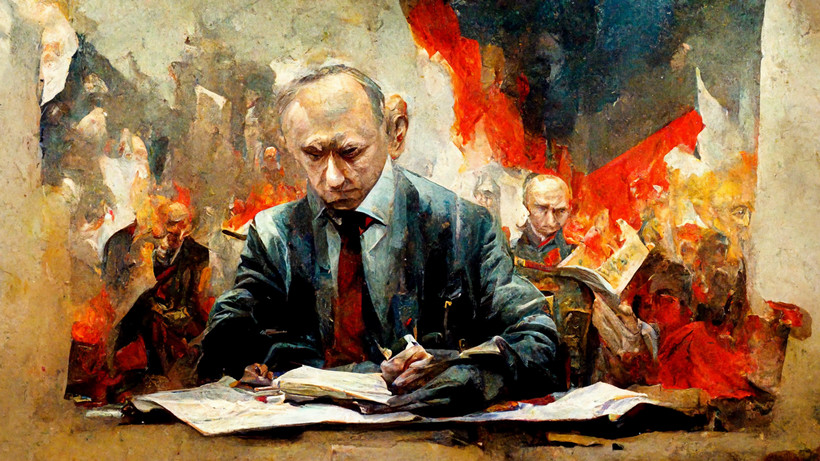 Killing democracy? There's a playbook for that.

The co-author of 'How Democracies Die' explains how elected leaders become despots
By Steve Paulson
Share:

Daniel Ziblatt is worried about the future of democracy — around the world, but also, increasingly, in the U.S. He's a professor of government at Harvard University, co-author of "How Democracies Die," and he sees a lot of warning signs.

Authoritarian leaders like Putin in Russia, Erdogan in Turkey and Orban in Hungary are no longer outliers. They are prominent figures in what’s been called "illiberal democracy," leaders who consolidated power after being elected, working to marginalize their opposition. Ziblatt says there’s a playbook for how demagogues can dismantle a country’s democracy.

This interview originally ran on "To The Best Of Our Knowledge" and has been edited for length and clarity.

Steve Paulson: Do you think American democracy is now in danger?

Daniel Ziblatt: Certainly, it is. There are a lot of threats currently. But if I had to put my finger on one factor, I would say it’s the radicalization of the Republican Party. That's sometimes a hard point to begin with because one sounds like a partisan, but I come to this as a student of conservatism.

I've written a book on the history of conservative parties in Western Europe in the 19th and 20th centuries, and I think a robust constitutional center right party is critical for democracy. But we have increasingly large segments of the Republican Party that are not behaving as a democratic political party. When you have only one political party fully committed to democratic rules and norms, this poses a great threat.

DZ: Yeah. Scholars of democracy have been very clear that there are three basic benchmarks to assess whether a political party or politicians are democratic.

No. 1, they have to accept election results. Democracies can't survive if parties and politicians don't accept defeat.

No. 2, political parties and politicians need to eschew violence. This is a clear lesson from the 1920s and 1930s, when you had communists and fascists in the street who were willing to use violence to gain power.

SP: So the Jan. 6 insurrection would be an obvious example of this.

DZ: And this points to the third key factor, which is a bit more subtle — to be a democratic political party.

You have to distance yourself from political actors, groups, parties and activists who participate in those first two behaviors. You have to join forces, maybe with your ideological opponents, but who are also committed to democracy. On that third dimension, I think we see some dangers within the Republican Party.

What we see looking at the history of the 1920s and 1930s, it's often the mainstream parties who turn a blind eye or talk out of both sides of their mouth when seeing their ideological allies participating in violence that got democracy into trouble.

SP: I think we tend to assume that a country loses its democracy when an elected leader is deposed in a coup. Take Salvador Allende in Chile, who was assassinated in a military coup in 1973. But there are plenty of other examples where a demagogue is elected through a reasonably fair election. The most notorious case would probably be Hitler. How did that happen?

DZ: The story of how Hitler came to power is in many ways paradigmatic and also unique. The broader lesson is the potential recklessness of mainstream parties when they make short term calculations and align themselves with political leaders who are a genuine threat to democracy.

So in the late 1920s, you had a very strong social democratic political party in Germany on the one hand, you had a highly fragmented political landscape in the middle, and you had a conservative party that was falling apart at the right end of the spectrum.

Then Hitler emerged kind of out of the blue, having been an obscure figure through most of the 1920s after an attempted coup (early in the decade). By the late 1920s, this conservative party that was falling apart saw Hitler and realized — we can join forces with Hitler.

We can hold joint election rallies with Hitler, push common legislation, and we will use the energy that seems to be in the streets for Hitler to shore up our political party. We are an elitist party. We don't have a mass base. We can align with this figure and use him.

SP: They thought they could control him.

DZ: And they thought they could ride him to power. Over the course of the next several years, between 1928 and 1933, the tables were very quickly turned, and it turned out Hitler was using these establishment forces to gain legitimacy. By the early 1930s, without a real conservative party left, President (Paul von) Hindenburg turned to Hitler and appointed him chancellor. And once in power, Hitler established dictatorial rule.

SP: We might think that these demagogues are always right-wing extremists, but that's not the case. Hugo Chavez in Venezuela was also an elected leader, but then he also consolidated power. What happened there?

DZ: A very similar story, but on the left. You had a mainstream president, Rafael Caldera, who freed Hugo Chavez from jail after Chavez had attempted a coup a few years earlier. Why Caldera did this is a matter of historical debate, but clearly, he thought he could tap into the popularity of Chavez, and this only legitimated Chavez.

Now a political actor on the mainstream stage, Chavez ran for president and won. Then once in power, he began to attack democratic institutions.

These figures who go on to attack democratic rules are typically outsiders. They often don’t have a lot of political experience, but usually they send out warning signs that they're going to be dangerous. They use violent rhetoric. They attack the media. They cast their political opponents as existential enemies to the nation.

So when you see politicians speaking this way, they often are as authoritarian as advertised.

SP: To take Hugo Chavez as an example, how did he consolidate power? I assume the first thing was to marginalize his political rivals and shut down the opposition media. Did he also rewrite the constitution?

DZ: In my book “How Democracies Die,” written with Steve Levitsky, we use the analogy of a soccer game to help understand this process by which elected leaders attack democratic institutions. Because there is a kind of playbook, there's a set of strategies that reinforce each other.

The first thing these kinds of figures have pursued, including Chavez and others — Viktor Orban in Hungary, (Recep Tayyip) Erdoğan in Turkey — is they try to capture the referees. The impartial umpires of the political game — whether courts, judges, investigative bodies, prosecutors — the actors who are supposed to be impartial to enforce the rule of law. For authoritarian demagogues, these figures are both an opportunity and a challenge.

SP: So they get rid of the neutral referees and put in their own people.

DZ: They do this in a couple of ways. No. 1, they often will force out people who won't play ball with them. For example, Viktor Orban imposed a retirement age on all the judges and changed the rules about how to select judges and essentially set up his party leaders in a position where they can now select all these new judges as the old judges were being forced out. But one can also intimidate them, bribe them, coerce them, blackmail them.

The second thing these leaders do, as in a soccer game, you want to go after the opposition players. So these regimes often go after the private sector — whether this is big business, sometimes labor unions, sometimes cultural figures, sports stars, popular musicians — to get these guys on their side or to silence them.

Then the final step is to lock in the advantages by tilting the playing field. This means changing the rules of the game — usually election rules to make it harder and harder to vote out the incumbent.

SP: How do they change the election rules?

DZ: One way would be a form of gerrymandering. You redraw the election districts in a way to make sure that your party is at an advantage so that the opposition party has to win more votes in order to win the same number of seats. The opposition can still win, but it becomes harder and harder. The opposition has to get bigger and bigger in order to even reach a 50 percent threshold.

SP: So let's get to a more complicated case, Donald Trump, who certainly shares some of these qualities you've been talking about. How much does he fit this playbook?

DZ: He fits it pretty well. So as a candidate, does one threaten violence? Does one go after the media? Does one challenge the legitimacy of one's rivals to run for office? Suddenly in 2015 and 2016, we saw an American politician with a viable chance of winning the presidency who fit that test to a tee.

SP: You're saying there were all these warning signs when Trump was running for president, and then once he became president, of pushing against every institutional safeguard. And yet the system held.

DZ: Yes, it held — I would say just barely. The work of the Jan. 6 committee has increasingly shown that there was a plan at the highest levels, if not to overthrow the government through violent seizure of power and murder, but there was an attempt at least to block the counting of ballots to hand the presidency to Joe Biden.

Now, there was a transition of power, so in this sense, our checks and balances did work. But one of the important things that determines the long-run viability of a democracy is how the history is written about those events. Making sure that we have a fact-based account of this is why the work of the Jan. 6 committee is so important.

If we have a false narrative of what happened, or a contested narrative, this weakens the immune system of our democracy for future events like this.

SP: So why did the system hold when Trump attacked governmental institutions throughout his presidency and made every effort to overturn the election? It seems like it was because enough government bureaucrats and judges stood their ground.

DZ: I think one of the least appreciated strengths and sources of resilience of American democracy are not only government officials, but more broadly people — whether lawyers, journalists, military officers — who abide by a professional ethos, which limits the kinds of things they’re willing to do and gives them the courage to stand up to bullies.

This conversation was recorded at the La Follette Forum on American Power, Prosperity and Democracy, held at the University of Wisconsin-Madison by the La Follette School of Public Affairs.