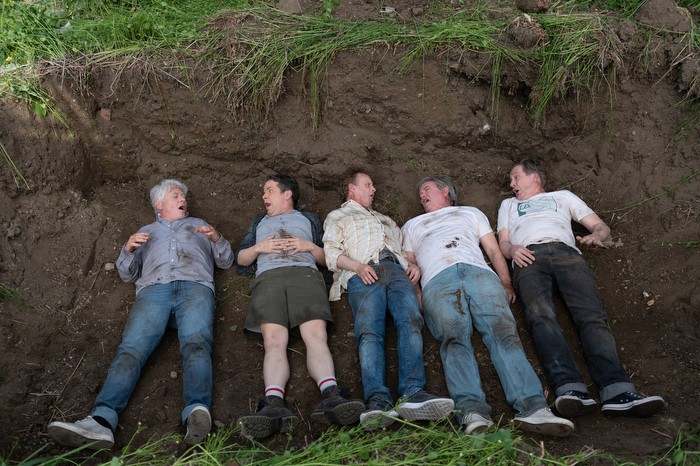 The new series keeps spirit of the original, member Dave Foley says
By Doug Gordon
Updated:
Saturday, May 14, 2022, 11:00am
Share:

One of Canada's greatest comedy exports, "The Kids in the Hall," is returning with a new season for Amazon Prime, 27 years after the original series aired. Wisconsin Public Radio's "BETA" was fortunate enough to talk to two members of the ground-breaking comedy troupe — Scott Thompson and Dave Foley.

In the fall of 1983, Thompson's friend Darlene Harrison took him to the Poor Alex Theatre in Toronto to see The Kids in the Hall sketch comedy troupe in action.

Thompson had been drifting around. He attended acting school, and he wanted to be a serious actor. Then he tried his hand at stand-up but found the atmosphere was so homophobic he couldn't deal with it.

The Kids had taped doughnuts underneath all the theater seats for a gag that they were going to do later in the show.

"And so I took the donuts and I started throwing them at them in the middle of their show, and I ruined their show," Thompson recalled. "I was so adamant that they notice me. These are punks — they'll like it if I trash their show. And they did."

Thompson's calculated risk allowed him to become the fifth and final member of The Kids. Since he came from an acting background, it took Thompson a while to figure out how to navigate the writers' room.

"I didn't have a clue what to do," he said. "Honestly, no idea. I had no idea how to write sketches or monologues or anything."

But over the years, Thompson learned how to write a sketch and how to craft jokes.

"I also learned how to subsume my personality to the group," he recalled. "And that's very important. Like, I was always a shiner, and I really wasn't a good listener, and I wasn't a good team player. But the troupe broke me down until by the end of it, I became a real team player. You have to be."

It might've been a Canadian thing, he said, but the troupe was adamant that no one member would stand out among the rest: "There was not going to be a star; the group was the star."

For his part, Thompson was a big influence on the way The Kids portrayed women.

Thompson's most famous Kids in the Hall character is undoubtedly the gay icon Buddy Cole.

Foley talks about 'The Kids in the Hall' new series

Foley described the reunion with his fellow Kids as a mixture of making each other laugh uncontrollably and being a bit awful to each other.

He said if you're a fan of the old "The Kids in the Hall' series, you'll like the new Amazon Prime series.

"It's very much true to the nature and spirit of the original," he said.

But apart from that, describing the series is difficult for Foley.

"All we've ever tried to do is make the other four guys laugh," he said. "And as an extension of that, it seems to make other people laugh. And that's kind of the model that we're still following."

Foley has said that the new series will have "a very low quotient of nostalgia." But is it possible that this nostalgia could include the return of two very memorable characters from the original series — Dean Deen (played by Kevin McDonald) and Lex Hair (Foley)?

"I kind of wish it had. I love those characters," Foley said.

But he said The Kids were very conscious of not using their most memorable characters too many times.

"I think there was probably like, I don't know, maybe five or six Simons and Hecubuses (sketches) over a five-year span," he said. "Another show might have done five or six and a season."

It's worth pointing out that certain live shows might have featured five or six recurring characters in a single season and actually turned them into major motion pictures, as well.

In their book, "Mondo Canuck," Geoff Pevere and Greig Dymond wrote of "The Kids in the Hall": "That so many people didn't get what The Kids were doing simply confirms the troupe's validity as something legitimately innovative and subversive."

"Oh, that's nice," Foley said in response. "It was unintentional. When we first got our TV show, we thought we'd be a breakout hit. We thought the masses would swarm to us because we were young and arrogant."