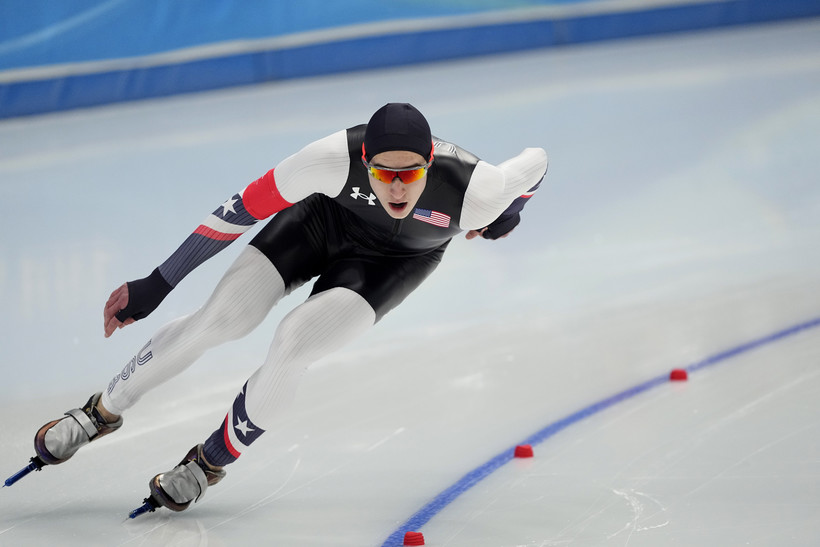 Speedskating sensation Jordan Stolz, 17, will race in the men’s 1,000-meter event in Beijing on Friday. After a disappointing performance in the 500-meter event last weekend, the Kewaskum native has regrouped and is eyeing a top six finish for his second and final event.

Stolz placed 13th in the 500, with a time of 34.85 seconds — just over half a second behind the gold medal skater, China’s Tingyu Gao. Stolz and his coach, Bob Corby, had been hoping for a top eight finish.

"He was disappointed. I was disappointed," Corby said. "I think the main reason why he didn't skate very well is he’s been sitting in his room in the Olympic Village for two and a half weeks waiting to race. And he's 17."

Corby, who is back here in Wisconsin, has been communicating with Stolz almost every day and reviewing video footage of his practice. He said Stolz is getting used to the ice and was really motivated by teammate Erin Jackson’s gold medal finish in the women’s 500-meter race.

Now they’re hoping for a top six finish in the 1,000-meter, which takes place Friday at 2:30 a.m. Central Standard Time.

"I think he'll do much better," Corby said. "He has the potential to medal, you just don't know how it's gonna go. How does the Olympics affect him? How does the 500 affect him?"

And with his breakout season, Stolz has proven that he can be delightfully unpredictable.

"He's just a humble kid who has a tremendous competitive fire going in him and he's phenomenally talented. So it's a pretty rare combination," Corby said. "I'm pretty lucky to have come out of retirement to coach this kid." 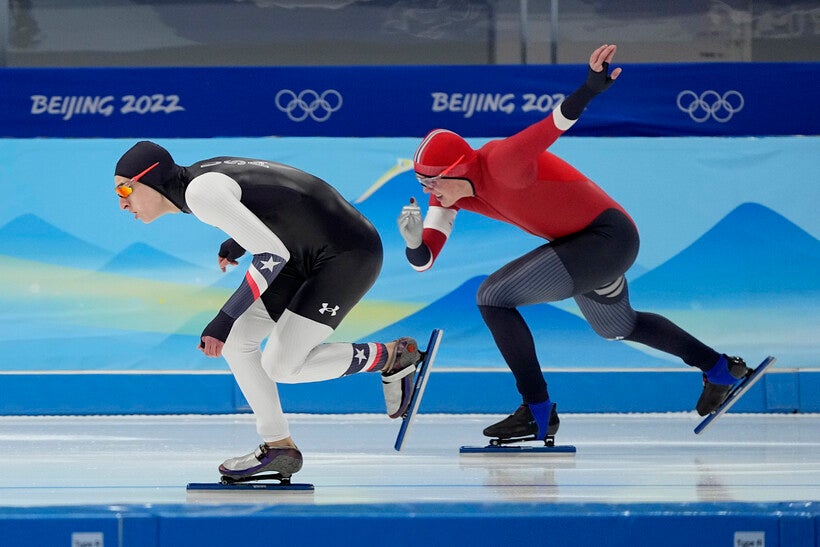 Jordan Stolz of the United States and Bjoern Magnussen of Norway, right, compete in the men's speedskating 500-meter race at the 2022 Winter Olympics, Saturday, Feb. 12, 2022, in Beijing. Ashley Landis/AP Photo

'We don't know where the ceiling is'

Stolz started skating when he was 5. Watching the 2010 Winter Olympics, he was so mesmerized by Apolo Anton Ohno that his parents bought him a pair of hockey skates and shoveled off the pond in their backyard to make a short track.

"I knew I loved this sport and all I wanted to do was be the best skater I could be," Stolz said in a recent Instagram post.

He showed promise as a skater and was soon working with three-time Olympian Shani Davis. But two years ago, Davis took a job in China and Stolz found himself searching for a new coach.

That’s when he called Bob Corby.

Corby had been out of the coaching game for 25 years at that point, but he couldn’t say no to a promising 15-year-old kid. So he cut back on his hours as a physical therapist to work with Stolz on weekends and two nights a week at Milwaukee’s Pettit National Ice Center.

Corby said Stolz had never done much off-season training before, so the pandemic provided a perfect opportunity. But unlike most of us who decided to get in shape during the lockdown, Stolz actually did it.

For nearly six months he trained twice daily — lifting weights, cycling hills and running sprints. And it made a big difference.

"From the moment he got on the ice that next year, he was pretty unbelievable. The kids that had been beating him were way behind," Corby said. "Every time he skated a race, he just kept getting better and better and better."

At the U.S. Championships in Salt Lake City in March 2021, Stolz won the 500 meters and was the only skater who performed under 35 seconds.

"He was just unbelievable," Corby said. "To think that a 16-year-old would win 500 meters at the U.S. Championships is just nuts. I mean, the guy who got second was 25, and the guy who got third was 31. And no one could believe it. They were like, 'Who is this kid?'"

Corby said that’s when the Olympics became a real possibility.

"And so we started doing the same thing all over again, except for now he's 4 inches taller and stronger," Corby said.

When the World Cup Trials came around in October 2021, Stolz was racing in the B-group because he had not yet racked up enough international experience to qualify for the A-group.

Then he set two junior world records and placed third. By November’s World Cup, he was racing in the A-group and breaking his own records.

"He spent one weekend in B-group and a lot of people spend two years in B-group," Corby said.

The 17-year-old was racing through the record books almost as fast as he skates the track.

But it was the U.S. Olympic trials a few weeks later, skating on his home ice at Pettit, where Stolz really made a name for himself. He won both the 500-meter and 1,000-meter events, setting track records in both. The record for the 1,000 meters had been in place for 15 years, held by Stolz's former coach, Shani Davis.

"We don't know where the ceiling is, but we don't really care. Let's just keep going," Corby said. 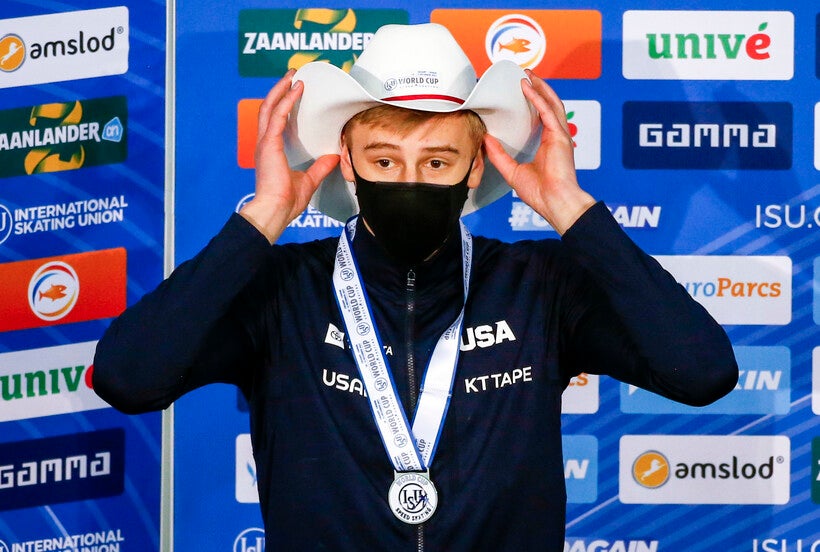 If you ask anyone what it is that makes Stolz so good, most of them will tell you he’s got good corners — something he honed by skating short tracks as a kid.

"He just has unbelievable technique and speed on corners," Corby said. "I've had a few of the older skaters look at him and say, 'You know, I think that's the best corner I've ever seen in my life.'"

"His corners are off the charts awesome," Cruikshank said. "He's got a … reliable stroke, meaning it's very athletic and very easy for him to repeat."

And Cruikshank knows technique. The four-time Olympian now coaches speedskaters and ice hockey players, from beginners on up to Olympians and professionals.

Like Stolz, Cruikshank was just 17 when he skated in his first Olympic Games in Calgary.

"You're kind of just wide-eyed and looking at the whole thing like, 'I can't believe I'm here,'" Cruikshank said. "I really hope he enjoys the experience and embraces the energy of the Games and the energy of what the Olympic movement is all about — the journey and the accomplishments and the hard work that it takes to get there."

As the youngest racer in the men’s 500 meters, and the youngest male athlete on all of Team USA, it’s likely we will see more of Stolz in the years to come.

"I just texted him (Tuesday) and I said, 'Do you actually know how young you are?' And he said, 'What do you mean?' And I said, 'Well, four years from now, if you make the next Olympic team, you will be as old as the second two youngest people,'" Corby said.

The next oldest members of the U.S. men’s speedskating team — Ethan Cepuran and Casey Dawson — are both 21. In other words, in four years, Stolz could still be Team USA’s youngest men’s speed skater.

"You're not just young, you're a toddler," Corby said to Stolz.

And with his drive and work ethic, he will only continue getting better.

"He's a heck of a talent," Cruickshank said. "He's going to be a force to reckon with around the world for a long, long time, which is really cool to see."

And Corby is all too happy to go along for the ride. Tomorrow he will be cheering Stolz on from Team USA’s family watch party in Park City, Utah.

"I'll stick around 'til he gets sick of me," Corby said.