In his very first TV ad, for his first ever campaign, Wisconsin Supreme Court Justice Dan Kelly introduced himself to voters as kind of a nerd.

Not just any nerd, mind you. A law nerd. Someone who reads statutes for fun, who pauses to admire a framed copy of the U.S. Constitution, whose kids think that he's a "great judge" and an "amazing dad," but "not exactly exciting."

While the ad is part tongue-in-cheek, there’s an element of truth to it. Kelly is putting himself out there to try to connect with voters. Despite serving on the state Supreme Court for nearly four years, running for office is new for him.

He's an incumbent justice, but it's because he was appointed to the court by former Republican Gov. Scott Walker in 2016. In an officially nonpartisan race, Kelly is the candidate supported by Republicans.

Kelly downplays those ties and says what people should really know about him as he faces off against Dane County Judge Jill Karofsky is that voters are the ones in charge of the court.

"I think what they should know is that I understand that they're the boss and I'm the servant," Kelly said in an interview.

But the rest of his message is familiar to Republican voters, who've helped conservatives like Kelly cement a 5-2 majority on the court. And Kelly has reached out to those voters in familiar ways. 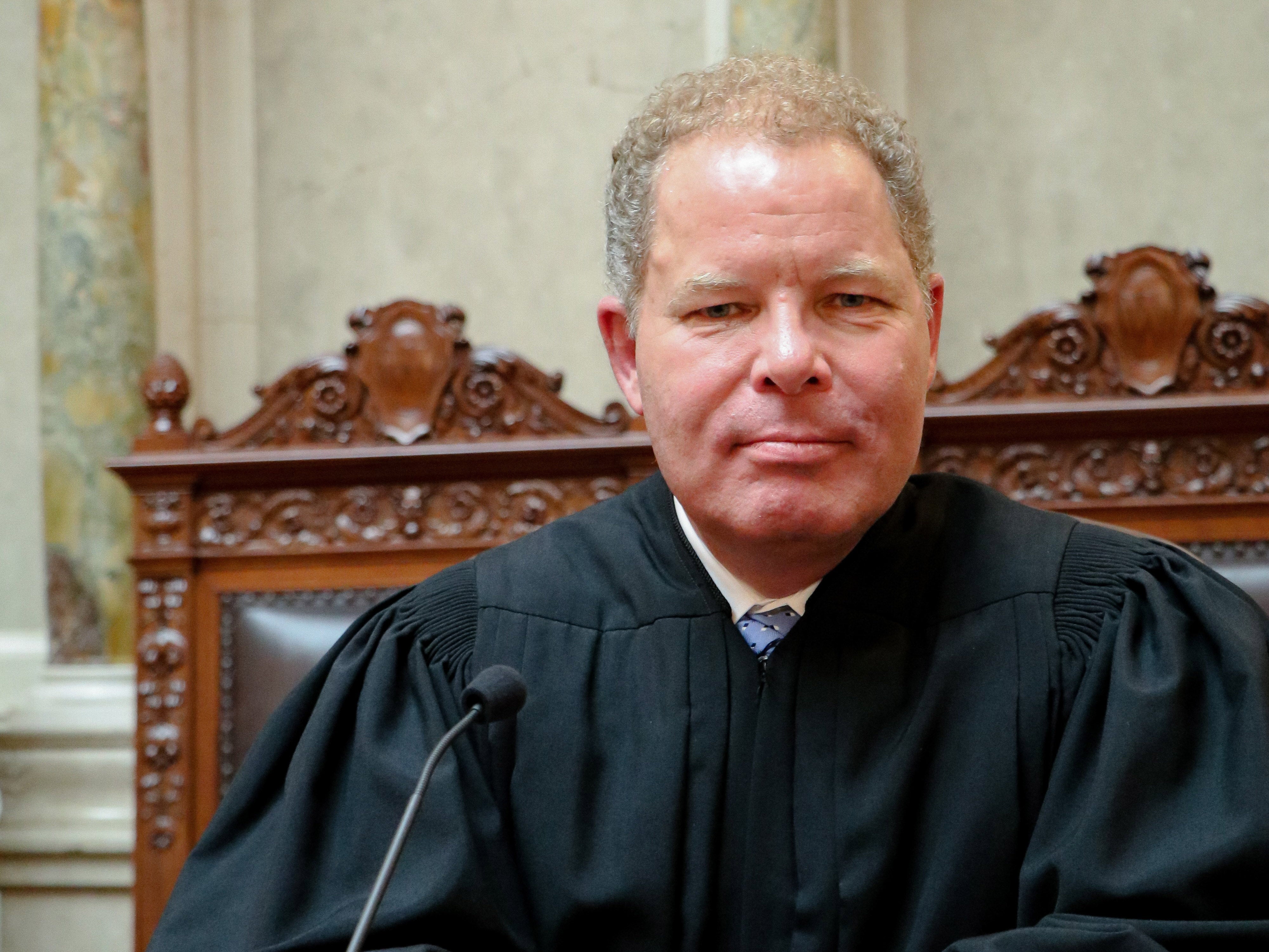 When Walker appointed Kelly in 2016 to fill the Supreme Court seat vacated by retiring Justice David Prosser, there was a lot of competition for the opening.

Unlike some of the others, Kelly had no judicial experience. Still, he rose to the top.

"He's incredibly smart, incredibly hard-working," said fellow conservative Supreme Court Justice Rebecca Bradley, another Walker appointee who won her own 10-year term in 2016. "Working on the court for him — and this is the same for me — it's kind of a dream job."

Kelly, who had a long career in private practice, got to know Bradley when they were active in the Milwaukee chapter of the Federalist Society, the conservative legal organization. By the time of his appointment, he'd made a name for himself in other ways.

"He's incredibly smart, incredibly hard-working," said fellow conservative Supreme Court Justice Rebecca Bradley. "Working on the court for him — and this is the same for me — it's kind of a dream job."

He worked on that trial with then-Assistant Attorney General Maria Lazar, who is now a circuit court judge in Waukesha County. Lazar handled trials involving several of the big Walker-era laws, including voter ID and Planned Parenthood restrictions.

"I'm sort of like a law geek like Dan," Lazar said. "I think Dan is one of the smartest people that I know."

Kelly went on to serve as vice president and general counsel for the Waukesha-based Kern Family Foundation, whose focuses include education and  entrepreneurialism. The foundation also funded grants for pastors to teach them about "the intersection of faith, work and economics." He also briefly advised the Wisconsin Institute for Law and Liberty, the conservative law firm and think tank that frequently appears before the Supreme Court.

Kelly graduated from Regent University, which was originally called Christian Broadcasting Network University when it was founded by televangelist Pat Robertson. Kelly said his own Christian faith is part of what drew him to the school.

"Sure, that's part of it. The other part of it was the school held itself out as focusing on a faithfully constitutional approach to the practice of law and I was very interested in that."

This assertion from Kelly — that he'll focus on the text of the Constitution as it was written — is a common refrain for conservatives. Politically, it has served them well.

Liberals held a 4-3 majority on the Wisconsin Supreme Court as recently as 2007. That changed in the 2008 election, and conservatives have held the majority ever since.

The flipside of that argument is that conservatives accuse liberal candidates for the court of acting like legislators. That's how Kelly has characterized Karofsky, his challenger in 2020.

That's not to say that Kelly has led a campaign that is free from politics.

He headquartered his campaign at the office of Wisconsin Republican Party, paying the party roughly $65,000 this year to cover rent, mailings and staff wages.

He authored a blog post years before joining the bench where he criticized the U.S. Supreme Court's decision that legalized gay marriage as judicial overreach. In another blog, he praised Walker's Act 10 legislation that restricted union rights for most public employees, saying the law had "saved the State of Wisconsin from a massive structural deficit and helped municipalities recover budgetary control from the public unions."

While Karofsky has talked about how she's concerned with gun safety in schools, Kelly has touted the endorsement of the National Rifle Association. His campaign's Twitter account posted a picture of him holding a semi-automatic rifle at a firing range.

While it was designed to send a message to supporters, Bradley said there was nothing wrong with it.

"It certainly signals somebody who is going to uphold and defend the Second Amendment, and that's very important," Bradley said. "To me, it's not a political issue. It's a constitutional right issue. And that's perfectly appropriate for a justice or judge to talk about."

More recently, Kelly held a fundraiser at a firing range the day after a gunman shot and killed five coworkers at Milwaukee's Molson Coors facility. Democrats called it tasteless. Kelly's campaign said they were the ones exploiting a tragedy.

A Familiar Line Of Attack

Kelly's campaign has also tried to focus on Karofsky's record, highlighting specific cases Karofsky has handled as a prosecutor or judge, where they say she was soft on crime.

Those include the case of Daniel Lieske, 61, whom a jury found guilty of homicide. Karofsky, who was the judge in the case, sentenced him to life in prison but gave him the ability to petition for parole after 20 years, saying he would be 81 years old by that time.

Kelly said Karofsky should have considered whether her sentence would protect the community or punish the criminal instead of weighing the criminal's age.

"She used that as a justification for getting him back into the community he'd just victimized as soon as possible," Kelly said.

Karofsky won't comment on the case, and said it was wrong for Kelly to discuss it since the case could some day end up before him on appeal.

The most vicious attack in the campaign has come from one of Kelly's allies, the Republican State Leadership Committee, which falsely accused Karofsky of going easy on a sexual predator when she was a prosecutor. Karofsky was not the prosecutor when the plea deal was reached, and her campaign has filed an ethics complaint.

What remains unclear is whether during an unprecedented time of the COVID-19 pandemic, the types of ads that normally sway voters still carry weight. Supreme Court elections are already low-turnout races and social distancing efforts could make turnout for this year's election even lower.

Election officials are urging people to request mail-in ballots and vote absentee, and record numbers of voters are doing just that, according to the Wisconsin Elections Commission. Voters can request ballots by mail until April 2 and their votes will count as long as they're received by local clerks on Election Day.

Whoever wins this court race could be asked to rule on some of the extraordinary events that are happening now, including Gov. Evers' unilateral decisions to close schools and many businesses and ban gatherings of 10 or more people.

Lazar thinks those circumstances are another reason to support Kelly.

"I think the Supreme Court right now — especially in these times where we aren't really sure what's going on with the pandemic, with everything else — that the court needs someone who really and truly cares about the separation of powers, who has the intellect to issue sound and legally based decision and who really just cares about the law," Lazar said.

Kelly already weighed in on one case related to the pandemic, joining Bradley's dissent when the Supreme Court ordered a temporary halt to all jury trials until May.

Speaking to PBS Wisconsin, Kelly said it's premature to discuss other cases that might come before the court, but he said he thinks about it.

"If you have at all a curious mind, you start thinking about it right away," Kelly said.