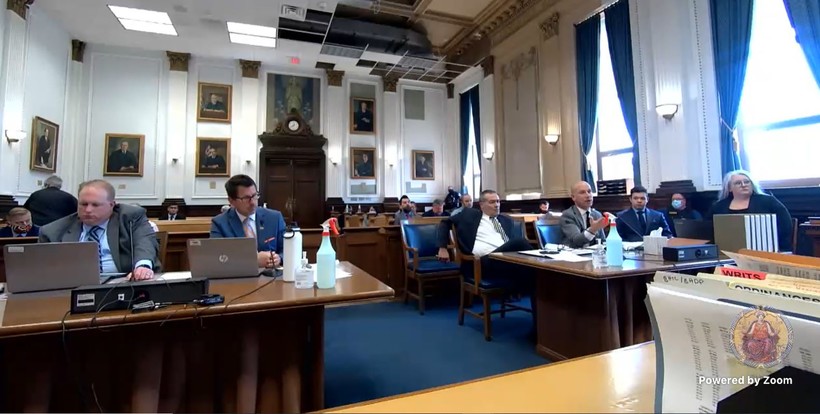 Defense attorney Corey Chirafisi gestures during arguments in Kenosha County Circuit Court in a motion hearing ahead of the trial of Kyle Rittenhouse, Friday, Sept. 17, 2021. Screenshot from video stream of hearing

A jury in the trial of a man who fatally shot two people during protests in Kenosha won't hear evidence that a far-right nationalist group rallied to the defense of Kyle Rittenhouse in the weeks after the shootings.

Rittenhouse, 18, is charged with killing 36-year-old Joseph Rosenbaum and 26-year-old Anthony Huber on Aug. 25, 2020, as well as wounding Gaige Grosskreutz, 26. Rittenhouse has pleaded not guilty, and his attorneys argue the shootings were in self-defense.

In a hearing Friday, Kenosha County Circuit Court Judge Bruce Schroeder withheld a final decision on whether he would admit evidence that Rittenhouse said two weeks before the shootings that he wished he had his gun so he could shoot criminals. But Schroeder said he found the circumstance of those statements by Rittenhouse "so dissimilar" to the crimes he is accused of that Schroeder likely wouldn't allow that evidence in the trial.

Prosecutors argued the evidence was "crucial" to their case as Rittenhouse's statements would illuminate his state of mind on the night of the shootings. The video, which is available online, shows Rittenhouse witnessing alleged shoplifters at a CVS drug store and saying if he had his gun he would "start shooting rounds" at them.

Prosecutors also told the judge that Rittenhouse's public appearance in January with members of the Proud Boys group, which embraces political violence, was relevant to the case.

"(Rittenhouse's) actions of coming into our community illegally after curfew with a gun at the time of a protest is entirely consistent with what the Proud Boys make it their job to do," said Kenosha County Assistant District Attorney Thomas Binger.

Defense attorney Corey Chirafisi said their side commissioned an expert analysis of the contents of Rittenhouse's cell phone. He said the report from that analysis found that the phone's contents "(do) not establish that the user belonged to or even had any interest in any militia-style organizations."

The judge sided with the defense.

Schroeder, who said he hadn't heard of the Proud Boys prior to this case, said Rittenhouse's later public appearance with members of the group wasn't relevant to the night of the shootings. He ruled against allowing the information about Rittenhouse's connections to the Proud Boys from being a part of the upcoming homicide trial.

Rittenhouse was 17 when he traveled from his home in Antioch, Illinois to Kenosha armed with a rifle to respond to protests and rioting that followed the police shooting two days earlier of Jacob Blake. Blake, who is Black, was left paralyzed when he was shot in the back by a white police officer. The shooting, which was later found by an independent investigator to have been justified, was captured on video and became a national flashpoint.

Rittenhouse has raised hundreds of thousands of dollars for his legal defense from supporters who believe he was justified to shoot the three men in his own self-defense. Months after the shootings, he appeared in a bar in Racine County with members of the Proud Boys. He wore a shirt that read "Free as F---."

Rittenhouse's trial is set to begin with jury selection on Nov. 1.