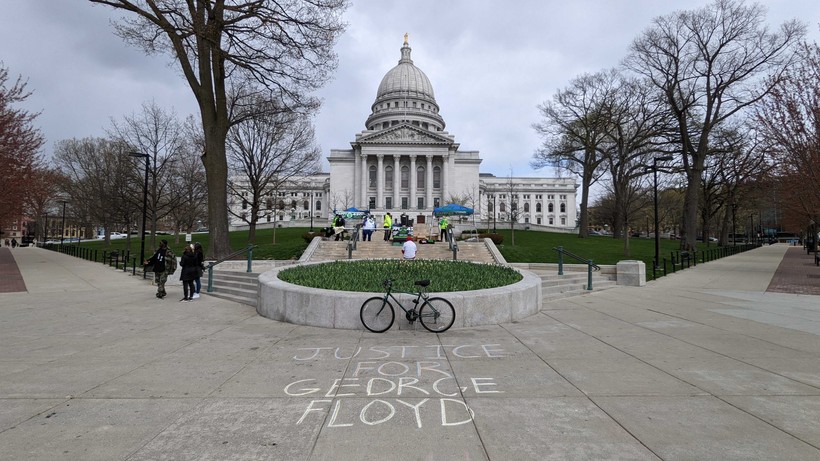 "Justice for George Floyd' written on the sidewalk in chalk in front of the Wisconsin Capitol in Madison on April 20, 2021. Angela Major/WPR

A jury has found former Minneapolis Police Officer Derek Chauvin guilty of murdering George Floyd on a Minneapolis street in May.

Chauvin, who is white, was charged with second-degree unintentional murder, third-degree murder and second-degree manslaughter. The jury found him guilty on all counts Tuesday afternoon.

The decision was heard across the nation, and in Wisconsin, crowds were gathering in Madison and Milwaukee.

Gov. Tony Evers said that the verdict is a reminder of how "we must reaffirm and resolve to continue our work toward justice."

"While this is a moment of accountability in our justice system and our country, we are reminded that justice for Black lives is not a moment — it requires meaningful, sustained, and systemic change," he said.

There’s no verdict that can bring peace to loved ones when someone is taken from them. My heart and thoughts are with George Floyd’s family, his loved ones, and the entire community.

In Madison, Police Chief Shon Barnes said the verdict "makes me feel a little bit better when justice was served, but we still have a long ways to go when we have to wait on pins and needles for a verdict that quite frankly should have been apparent to everyone."

Michael Johnson, the CEO of the Boys and Girls Clubs of Dane County, said his "stomach was in knots" awaiting the verdict.

"We all saw that video," Johnson said, referring to the video of Floyd's death that set off a wave of Black Lives Matter protests last spring and summer. "I'm just thankful that the jury saw the same thing we all saw in America."

During the trial, prosecutors argued Chauvin squeezed the life out of Floyd, a Black man, by pinning his knee against Floyd's neck for more than nine minutes last May, ignoring bystanders and common sense.

Floyd was handcuffed and laying on the ground facedown while in police custody. He said he couldn't breathe. He was arrested after allegedly attempting to use a counterfeit $20 bill.

The defense argued the now-fired officer acted reasonably and that Floyd, who was 46 at the time of his death, died of an underlying heart condition and illegal drug use. The former officer invoked his Fifth Amendment right and didn't take the stand during the trial.

The trial began March 29. The jury of six white people and six people who are Black or multiracial sat through three weeks of emotional and draining testimony.

According to Minnesota Public Radio, state sentencing guidelines recommend 12.5 years in prison on the second- and third-degree murder charges for someone who has no criminal history. The sentence for someone convicted of second-degree manslaughter is four years.

During the trial, there was a fatal police shooting in nearby Brooklyn Center. Daunte Wright, a 20-year-old Black man, was killed by Brooklyn Center Police Officer Kimberly Potter on April 11. The shooting lead to protests and clashes with law enforcement.

Potter, who is white, has been charged with second-degree manslaughter in Wright’s killing. Wright was unarmed at the time of the shooting. 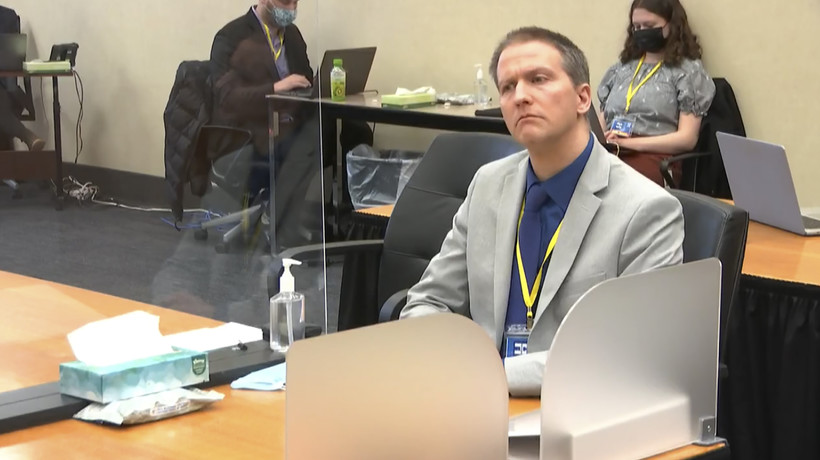 In this image from video, former Minneapolis police Officer Derek Chauvin listens as his defense attorney Eric Nelson gives closing arguments while Hennepin County Judge Peter Cahill presides Monday, April 19, 2021, in the trial of Chauvin at the Hennepin County Courthouse in Minneapolis. Chauvin is charged in the May 25, 2020 death of George Floyd. Court TV via AP

In Wisconsin, leading up to the announcement, local leaders and law enforcement in cities including Madison and Milwaukee urged the public to remain calm regardless of the jury's decision. Communities across the state saw widespread protests for social justice last summer after Floyd's death. Some protests turned violent.

Around 4:15 p.m. Tuesday a handful of people gathered near the state Capitol in downtown Madison and "Justice for George Floyd" was written in large chalk letters on the pavement.

Johnson said he had been in touch with organizers in Madison and that he expected planned protests would be "more of a celebratory march" in response to the guilty verdict. 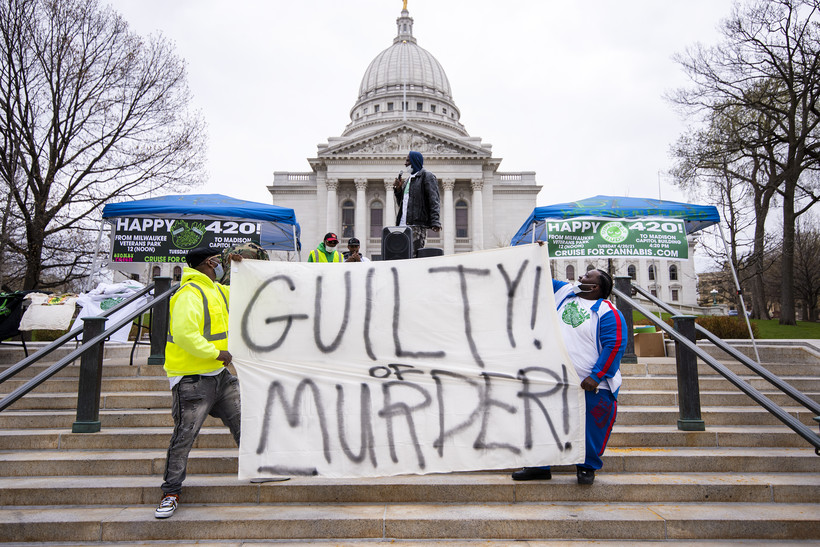 People on the steps of the Wisconsin State Capitol react to the verdict after a jury found former Minneapolis Police Officer Derek Chauvin guilty of murdering George Floyd. Angela Major/WPR

In a media availability around 5 p.m., Milwaukee Mayor Tom Barrett and acting Police Chief Jeffrey Norman told reporters they believe justice was served. No one will forget the image of Floyd’s death, Barrett said. He acknowledged Milwaukee needs to make changes to its own law enforcement culture. Norman, who was named acting chief in December, also said the department needs to improve its community relations and training practices.

Leading up to the verdict, the Milwaukee Police Department worked with local and state officials to prepare for possible protests, Norman said.

Barrett and Norman agree the verdict is a watershed moment — but is more of a starting point than a conclusion, they said.

"The fight for racial justice, the fight for fair policing, the fight for community involvement has to continue," Barrett said. "It will continue because we continue to see too many people dying at the hands of police officers throughout this nation."

Vaun Mayes, Milwaukee organizer with Community Task Force MKE, said organizers in the city are relieved at the verdict, and there is "great positive energy and hope for them to continue that fight here locally."

"People are energized," Mayes said. "That's good to see, because this last almost-year (since Floyd's death) has definitely been difficult for a lot of them."

Janiya Williams was part of a gathering of activists in Milwaukee. She said she hopes the verdict spreads accountability for police abuses in her city.

"I want to see accountability for the people who did stuff here," she said. "Maybe seeing this, maybe something else is going to happen too, like everybody everywhere are going to be changed."

Wisconsin's other elected leaders began issuing statements shortly after the verdict was read on Tuesday afternoon.

Wisconsin Attorney General Josh Kaul, the state's top law enforcement officer, said, "Derek Chauvin was not protecting or serving the residents of Minneapolis. He was committing a horrific crime. ... Today's verdict does mean there will be accountability, and, I hope, a measure of healing, especially for Mr. Floyd's family."

U.S. Sen. Tammy Baldwin said, "Justice has been rightly served and (Chauvin) will be held accountable for this murder. Far too many Black lives have been taken by police and change is long overdue."

U.S. Rep. Gwen Moore, of Milwaukee, said, "The pursuit of justice and real reform to restore trust between communities and police must continue."

Milwaukee County Executive David Crowley said "Real justice is living in a world where George Floyd and Daunte Wright are alive today and their killers never had the power to take their lives in the first place."

The Milwaukee Bucks organization wrote that "while this decision provides accountability to this police officer for his heinous crime, we must continue to address police officers' excessive use of force and immediate escalation when engaging with people of color."

The Milwaukee-based advocacy group Leaders Igniting Transformation wrote on Twitter that the verdict was a "huge step forward," but that "true justice for the death of George Floyd, Breonna Taylor and the many others at the hands of police will come in the form of abolishing the system that allowed their deaths in the first place."