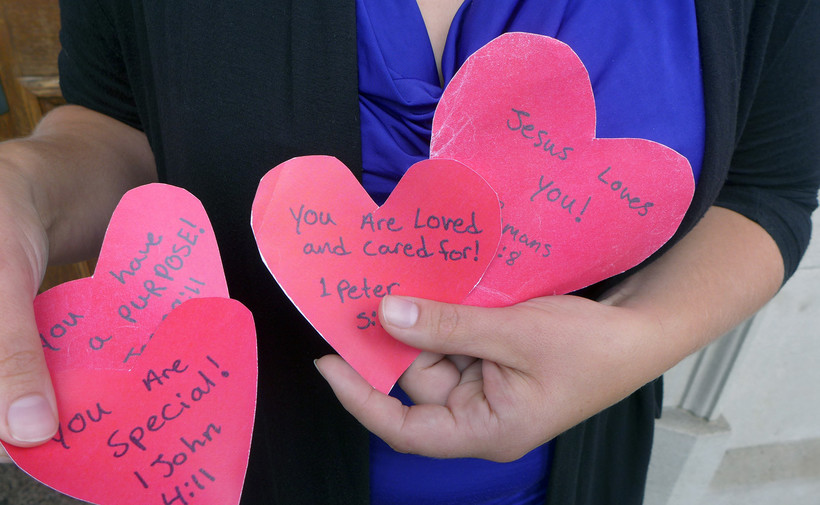 A federal judge has ruled that Northeast Wisconsin Technical College violated a student’s First Amendment rights after she was told to stop handing out valentines with Bible verses on campus last year.

In his ruling Friday, Judge William Griesbach said the student "was not trying to hold a public meeting for open discussion of her opinions or beliefs. She was not convening a political rally or religious revival meeting."

On Feb. 14, 2018, student Polly Olsen was handing out handmade heart-shaped valentines with messages like "Jesus loves you" and "You are cared for" to fellow students and some staff at the college's Green Bay campus.

Olsen told Wisconsin Public Radio she was approached by campus security and told she had to stop because of a campus policy on solicitation.

Olsen said school officials had confronted her in 2014 about her religious-themed valentines, which she said is a tradition she is continuing in honor of her late mother. Olson said when she was stopped by campus security in 2018, she was told there had been a complaint. She said an officer told her she was violating a campus public assembly policy that banned students from distributing things like pamphlets and flyers in a specific area.

Olsen said she knew the law was on her side. "I told him that’s my constitutional right, and who do I need to talk to to get this changed because I’m not going to be quiet this time," Olsen said.

Olsen filed a lawsuit against NWTC President Jeff Rafn, the responding officers and members of the NWTC District Board arguing the campus’ public assembly policy was unconstitutional because they restricted the First Amendment rights of Olsen and fellow students.

"The fact that one person anonymously complained about the message does not rob her of her right to convey her message to others who willingly accepted it," wrote Griesbach. "No one, including the complainer, was forced to accept Olsen’s offer of a Valentine; he or she could have simply said, 'No thank you,' or promptly placed it in a trash receptacle. NWTC had no more right to prevent her from handing out individual Valentines than it did to stop her from wishing each individual to have a 'good morning and a blessed day.'"

He said the campus has always supported students' free speech and the Valentine's Day cards weren’t the main concern. Instead, Rafn said the problem was that Olsen had gone into an office area that deals with confidential student information to hand them out.

"The ruling talks about common spaces and I think we’ll make it clear that students can be in any of the common spaces. But the offices are like any other office — you don’t normally go into a place and you can just walk into any office that you want to walk into," Rafn said.

Griesbach took issue with that argument in his decision writing.

"There is no evidence that this was a restricted area and it is undisputed that Olsen had a practice of visiting employees at NWTC who were friends for both personal and school-related reasons," he wrote.

NWTC has since updated its public assembly policy. It includes more areas where students are allowed to assemble but identifies campus offices as off limits. It also eliminates the need for students to make reservations with campus security for assemblies or "expressive activity" but gives preference to students who make reservations if multiple groups want the space.

Rafn said the policy change was not a result of the pending litigation.

Conservative law firm Wisconsin Institute for Law and Liberty represented Olsen while she took the technical college to court. In an interview with WPR, WILL President Rick Esenberg said the campus' new policy isn’t much better than the prior iteration.

"I think that NWTC would do itself some good if it simply accepted the fact that it’s a public institution, that it’s constrained by the First Amendment and that its purpose is to provide for the open exchange of ideas among its students," Esenberg said.

Olsen has since graduated from NWTC. In March, she was invited to the White House where President Donald Trump issued an executive order aimed at withholding federal research funding from universities that stifle free speech.

As for the next chapter in her life, Olsen said she’s forming a nonprofit aimed at eliminating what she calls "free speech zones" at colleges and universities. She’s also joining a national speaking tour with the conservative Leadership Institute which aims to increase "the number and effectiveness of conservative activists and leaders in the public policy process."

"We’re going to get the word out that intimidation and bullying by universities and schools is not allowed and students do have that right to stand up and well, the court seems to back that up pretty well in their statement that they had," Olson said.