There's a well-established playbook for Supreme Court campaigns in Wisconsin, and it starts with this cardinal rule: You don't have to be a judge to win, but it sure seems to help.

All kinds of lawyers are welcome to run for the court, but practically speaking, the pattern is clear: the winners tend to be prosecutors.

The races are officially nonpartisan, but that doesn't seem to matter anymore. Winning candidates will tout endorsements from governors to U.S. senators.

Jill Karofsky, the candidate supported by Democrats in this year's Supreme Court race, checks all of these boxes. And yet her sales pitch for the court almost invariably drifts to her exercise regimen.

She introduces herself as a former Division I college athlete, a high school state tennis champion and an "ultra-marathoner" who has completed two Iron Man triathlons. During an interview for this story, she said she'd stuck with her exercise routine during her campaign, running a 50-mile race in August.

This is not part of the usual campaign script, but it's part of Karofsky's identity, and she uses it to differentiate herself from her opponent, conservative incumbent Supreme Court Justice Daniel Kelly. 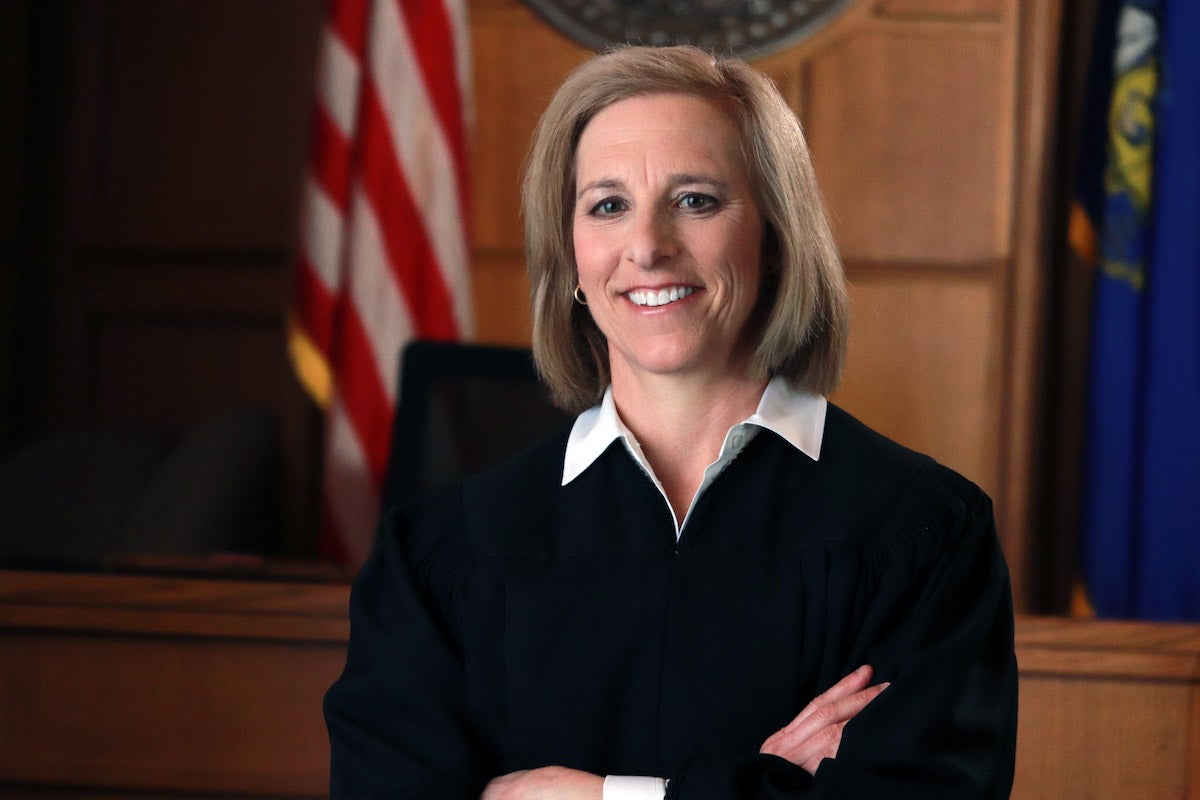 New To Campaigning, No Stranger To Politics

Before this Supreme Court contest, Karofsky's only campaign was a 2017 race for Dane County Court, a race she won with 58 percent of the vote to become a circuit court judge.

Prior to that, she was the head of crime victim services for the state Department of Justice. She also worked for about a decade for the National Conference of Bar Examiners and spent the decade prior to that working for the Dane County District Attorney's office.

But while Karofsky is a relative newcomer to campaigning, politics runs deep in her family.

Decades earlier, she watched her mother, Judy Karofsky, run successfully for Middleton mayor. Judy Karofsky went on to work for other Democratic campaigns and administrations.

"She's always been aware of the political atmosphere," said Judy Karofsky in an interview. "But it was not part of her profession — of her personal goal — until she ran for the judgeship."

Karofsky's family has been friends with former Democratic Wisconsin Gov. Jim Doyle since before he began his own political career. Doyle says he met Jill Karofsky when she was just a kid.

"I watched her grow up. She was somebody you could tell from the earliest time on she was really going to do great things," Doyle said.

Jill Karofsky went on to receive her undergraduate degree from Duke University and her master's and law degrees from the University of Wisconsin-Madison.

"I watched her grow up. She was somebody you could tell from the earliest time on she was really going to do great things," said former Wisconsin Gov. Jim Doyle, a long-time friend of Judge Jill Karofsky's family.

She became an Assistant Dane County District Attorney in 1992, although her connection to her mother drew her into the courtroom long before then.

Karofsky wanted to legally change her middle name to honor her mom. So, she did.

"The first time I walked into a courtroom, I was only 10 years old," Karofsky recalled. "I hired my own attorney and I walked into that courtroom to change my middle name so I could be named after my mom. So when you walk in the voting booth and you see 'Jill J. Karofsky,' that 'J' is for my mom, Judith."

A Campaign On 'Values'

Like any candidate running for the Supreme Court, voters won't see a political party next to Karofsky's name on the ballot, but she has sent unmistakable signals about her progressive worldview, saying her values have helped prepare her for the bench.

"My kids are worried about gun safety in school," Karofsky continued, adding that this is a concern she shares. "My kids are concerned about the climate crisis."

When she's asked about specific laws, Karofsky said she wants to make it clear that her comments won't indicate how she would rule on a case that might come before the court. But that doesn't stop her from talking about them.

"It was pretty clear that schools had to do much more with less," she said.

"I think that what we ought to be doing in this state and in this country is making it easier for people to vote, not more difficult," Karofsky said.

Kelly, Karofsky's opponent, has been especially critical of her for saying recently that she would advocate for social justice issues on the court, like criminal justice reform.

She's described Kelly in unusually blunt terms, saying repeatedly that Kelly is part of a 5-2 conservative majority that is "corrupt."

Karofsky said that since Kelly was appointed to the court by Walker in 2016, he's been a reliable vote for Republicans and Republican causes. She lists a couple examples.

One involves a dispute over the powers of Wisconsin's state superintendent of public instruction. In 2016, before Kelly joined the bench, a fractured court overturned a new law that limited the power of the superintendent. Just three years later, with Kelly on the bench, the court reversed course and ruled against the superintendent and in favor of the conservative Wisconsin Institute for Law and Liberty.

Karofsky also said it was wrong for the Supreme Court to rule on one of the lawsuits last year challenging the Legislature's lame-duck laws limiting the governor's powers before it was given a trial.

"We might as well put a 'for sale' sign on the Supreme Court," said Karofsky, attacking her opponent, Justice Daniel Kelly as beholden to special interests.

Asked about the examples, Kelly said there was no reason to hold a trial in the lame-duck case because nobody disputed the facts. As for the case involving the state superintendent, he has said that the court should not be bound by previous decisions if justices believe they were reached in error.

The larger issue, Kelly said, is the way Karofsky talks about the court.

"What comes to mind immediately is how regrettable and unfortunate it is that a member of the judiciary would be so sloppy and irresponsible in slandering not just me, but the whole court," Kelly said.

Karofsky, and her supporters like former Gov. Jim Doyle, contend there's nothing wrong with criticizing the court, saying Kelly and other justices should take it to heart.

"I think they ought to grow up," Doyle said. "I mean, I think what she's saying is true, and I think that that's a criticism that people should understand is deeply felt in the state."

"I think she's raised a really, really valid issue," Doyle added, "And she's done it very effectively, apparently, because boy are they reacting to it."

The Playbook Gets Tested

It's hard to say whether Karofsky's tactics will prevail, partly because this year's election is unlike anything Wisconsin has ever experienced.

To slow the spread of the new coronavirus, many businesses are shut down, and the state issues daily warnings to people to avoid large groups, the kind you might expect on Election Day. Supreme court debates have been canceled. Traditional door-to-door campaigning has shut down. Many polling places won't be active this year.

The election is still happening, but election officials and both political parties are urging people to request mail-in ballots and vote absentee. Record numbers of voters are doing just that, according to the Wisconsin Elections Commission. Voters can request ballots by mail until April 2 and their votes will count as long as they're received by local clerks on Election Day.

Traditional campaign metrics look good for Karofsky, who has outraised and outspent Kelly, thanks in large part to the Democratic Party of Wisconsin, which has contributed nearly $1.3 million in support of her bid. Third-party groups have also spent more on Karofsky's behalf than they have for Kelly, according to a review by the Wisconsin Democracy Campaign.

While last-minute ads can swing Wisconsin Supreme Court races, Karofsky's mom, Judy, said her daughter, the lifelong athlete, is ready for this moment.

"Like every good athlete ... they're taught to watch the opponent, watch their moves, diagnose their strengths and weaknesses and put together a game plan."

The question is whether those same rules apply to judicial campaigns.