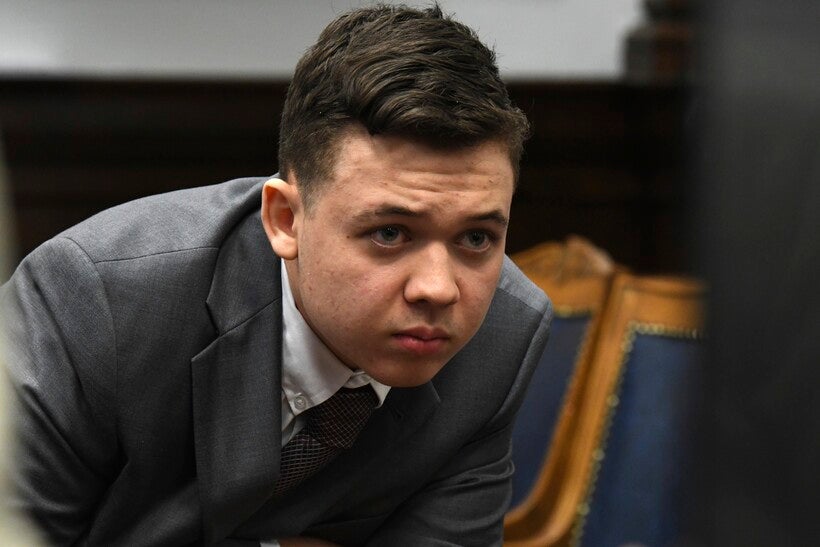 Kyle Rittenhouse peers at the screen as attorneys for both sides argue about a video during Rittenhouse's trial at the Kenosha County Courthouse in Kenosha, Wis., on Friday, Nov. 12, 2021. Rittenhouse is accused of killing two people and wounding a third during a protest over police brutality in Kenosha, last year. Mark Hertzberg/Pool Photo via AP

The judge's final decision on the matter, which is expected to come Saturday, gives the jury more options if they're unable to agree on homicide, attempted homicide and reckless endangerment charges against Rittenhouse.

James Krause and Thomas Binger, assistant district attorneys for Kenosha County, asked Judge Bruce Schroeder for a series of what are called lesser-included charges to be considered by jurors as they deliberate over Rittenhouse's fate. The jury is expected to begin deliberations Monday, when closing arguments are scheduled to be made.

Prosecutors, Rittenhouse's defense attorneys Corey Chirafisi and Mark Richards, and the judge debated over the lesser charges for hours Friday, sometimes getting into heated exchanges. 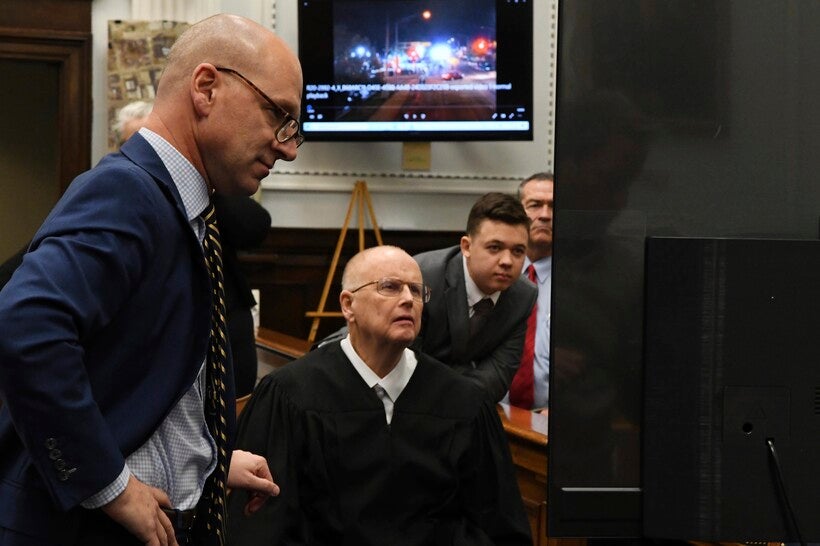 Defense attorney Corey Chirafisi, left, Judge Bruce Schroeder and Kyle Rittenhouse look at video screen as attorneys for both sides argue about a video during Kyle Rittenhouse's trial at the Kenosha County Courthouse in Kenosha, Wis., on Friday, Nov. 12, 2021. Rittenhouse is accused of killing two people and wounding a third during a protest over police brutality in Kenosha, last year. Mark Hertzberg/Pool Photo via AP

Schroeder also said he plans to submit a provocation instruction to the jury in the reckless homicide charge filed for the killing of Joseph Rosenbaum, 26, after watching drone footage prosecutors argued showed Rittenhouse raising his rifle toward the man just before Rosenbaum chased the teen and was shot.

"My decision will be to submit the case to the jury with the provocation instruction. And you can argue the strength or lack of strength of the respective evidence," said Schroeder.

The Associated Press reported Schroeder will make his final ruling on the lesser-included charges and juror instructions Saturday. Jurors will be given instructions Monday.

"I think there is an argument that starting with second-degree intentional homicide on one of the counts is basically warranted, given that the government is basically saying that this was imperfect, self-defense in that while Rittenhouse himself believed he had to use this force, that was objectively unreasonable, which would be second-degree intentional homicide," said Adams.

The defense rested its case Thursday.

Rittenhouse's lawyers have argued he was acting in self-defense on Aug. 25, 2020, when he killed Rosenbaum and Huber, and wounded Grosskreutz.

Rittenhouse testified for more than five hours Wednesday, becoming emotional and saying he feared for his life.

Prosecutors spent hours cross-examining Rittenhouse, pressing him on every detail of the shootings in an effort to characterize him as the aggressor.

Rittenhouse arrived in Kenosha on the third day of protests following the police shooting in August 2020 of Jacob Blake, a Black man who was left paralyzed. Blake was shot by Kenosha police Aug. 23, 2020. The shooting sparked days of protests in Kenosha's downtown and uptown neighborhoods. The protests turned destructive, with cars and buildings torched.

Rittenhouse traveled across the border from Illinois in response to a social-media call from a Kenosha-based militia group saying it hoped to protect businesses from protesters, Kenosha Police Detective Martin Howard testified last week.

"The Kenosha community has been strong, resilient, and has come together through incredibly difficult times these past two years, and that healing is still ongoing," said Evers. "I urge folks who are otherwise not from the area to please respect the community by reconsidering any plans to travel there and encourage those who might choose to assemble and exercise their First Amendment rights to do so safely and peacefully."