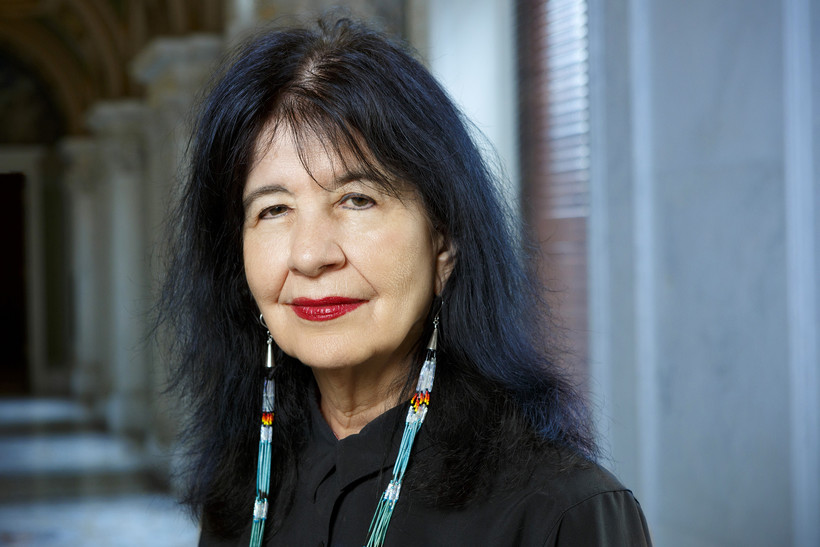 US Poet Laureate chronicles her life journey in the memoir, 'Poet Warrior'
By Steve Gotcher
Share:

Joy Harjo never intended on becoming a poet. Yet, she is beginning her third term as the 23rd Poet Laureate of the United States. As a member of the Muscogee (Creek) Nation, she is the first Indigenous person to hold the post. In addition, Harjo has written nine books of poetry, plays, children's books, two memoirs and seven music recordings. Her second memoir is called "Poet Warrior." Joy Harjo talked with WPR's "BETA" about her new book and her journey to becoming a poet.

"I had no plans to become a poet," Harjo said. "There were no poets in our neighborhood. There was no table for career day that said 'poet.' I started writing poetry when I was an undergraduate at the University of New Mexico and as part of the Kiva club, the Native student club. We were very politically and socially active and began work to be helpful and assist. That's when I began writing poetry."

"Poet Warrior" weaves ancestral and family stories with poems that tell the story of Harjo and how she found her way to her art. In "Poet Warrior," Harjo chronicles her life with a father who struggled with alcohol addiction, who left only to find herself under the thumb of an abusive stepfather. She says he became one of her greatest teachers, which caused her to find her way to the spiritual world.

"I think whether you're a prisoner of war, in the encampment of the enemy, or you're a child growing up in an abusive home or the middle of an extremely stressful situation. We construct, or these places are constructed for us in some way, and we participate in them so that we can move through what might be too difficult to bear at that time," she said. "What calls to me or what has always motivated me, is the spiritual realms. I think I came to poetry for that because poetry is not rhetoric. Poetry is a language that can speak of things that we can't hear or see or know, or sometimes even feel yet."

As she grew up, Harjo found that one way to deal with difficult situations was to write down her stories. She sees it as a way of healing.

"What writing ('Poet Warrior') taught me is that it helps give perspective, and it's like breathing it out. That gives you a better context and perspective for understanding. Telling a story or writing a story in a way is transforming it. So, to take it from one place using a tool, whether it's digital for sound, speaking your story, or taking a pen, you're in essence transforming it."

Poetry led Harjo to music. In her 40s, she learned to play the soprano saxophone and befriended famed Native jazz performer Jim Pepper while in New York for a poetry performance. She visited Pepper intending to get a saxophone lesson, and from there, they became lifelong friends. They talked about great past players, like Coleman Hawkins and Ben Webster, and how they developed a sound all their own born of the times in which they lived.

Harjo began her recording career with her first album called "Letter from the End of the Twentieth Century," which came out in 2003. The album features Harjo reciting 10 of her poems set to music arrangement by her and her band Poetic Justice.

Her seventh album, "I Pray for My Enemies," was released in March 2021 and featured Peter Buck of R.E.M. fame on guitar.

It was recorded at the height of the pandemic.

"My co-producer, Barrett Martin, called and said, 'I'm up here in Port Townsend, Washington, and I have my setup here, and we can get some bass tracks down and voice down.' So, we drove in the middle of the pandemic from Tulsa to Port Townsend. Peter Buck came in and added some really cool guitar parts," Harjo recalled.

As poet laureate, Harjo found new ways to reach out and share music and poetry with people across the U.S. It's a position she's taking full advantage of whenever she can.

"I do what I love, and I've been lucky to get to do poetry. In my life, it's taken me to a lot of places. With the poet laureate position, I'm doing what I've always done. I go into communities, I talk with people, I listen, we write poetry and listen to poetry. I've been doing that for years, all over the country and around the world. And so, I'm doing what I've always done," she said. "Being the poet laureate certainly gives me more of a calling card that I did not have before."