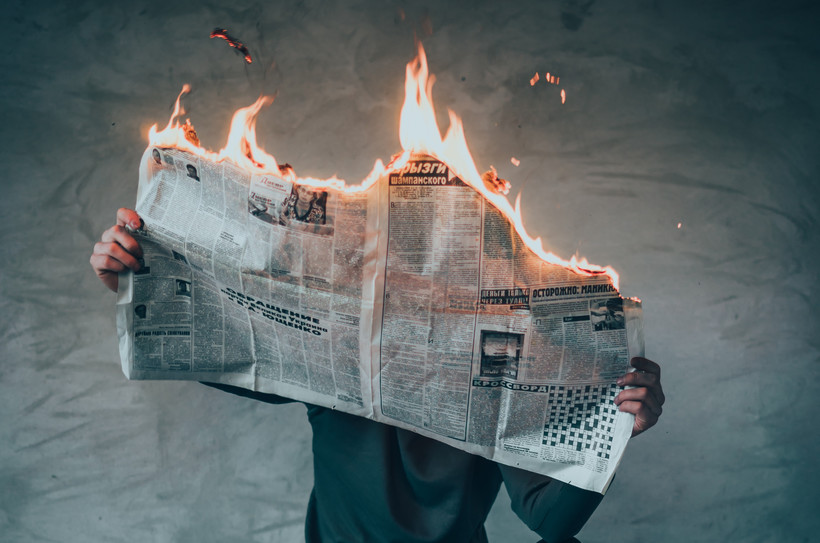 Journalist Matt Taibbi is a contributing editor for Rolling Stone. He's also the winner of the 2008 National Magazine Award for columns and commentary. His latest project is a serial online book called "Hate, Inc." How, And Why The Press Makes Us Hate One Another." He recently talked to WPR's "BETA" about it.

What is the major theme of "Hate, Inc.?"

"The main theme that runs through the book is that we in the commercial media now are financially incentivized to wind people up and make them angry with each other. Whereas in the old days of media, back in the days when we had three networks and just a couple of newspaper chains, we had exactly the opposite dynamic in media. The idea was to make the audiences less wound up and actually more placid because we were trying to reach the widest possible audience," Taibbi said. "Now what we do is we have a divided demographic where, you know, MSNBC goes after liberals, Fox goes after conservatives, and the easiest financial route to success is just making those groups angry with each other."

How has the media industrial complex turned the news into sports?

"One of the things is that sports is a format that definitely works commercially, that the networks are familiar with. They know how to sell it, they know how to market it. And we’ve stolen a lot of things from how we cover sports and transplanted it on to presidential campaigning. You’ll see that a lot, especially on election nights, if you watch election coverage on the cable networks. You’ll see that the setup on the sets is almost exactly like a Sunday countdown show for the NFL. You’ll have one analyst from one team, one analyst from another team. And then there are people who make predictions about which team is going to win. And everything becomes about the horse race," he said.

"We borrow a lot of the language and the stylistic aspects of sports coverage for things like debates, which are just chock-full of boxing metaphors from start to finish. And I think a lot of that is just a formula because it’s easier to train audiences to understand politics as something that they have to root for, as opposed to trying to train them to think in a nuanced way about a very, very difficult subject."

"This kind of content that we’re doing nowadays, is basically about monetizing anger. If you click on basically any news story through social media, it’s geared up to make you upset about something. And (President) Donald Trump is the perfect example of a political story that people just can’t have any neutral feelings about. They either love the guy and hate his enemies or they hate him. And so any story about basically anything involving Trump is going to get people furious. Then they’re going to read that, they’re going to go to social media, they’re going to argue with people about that, and they’re going to stay in this emotionally-amplified, heightened state of sort of anxiety all day long," Taibbi said.

"That has an addictive effect, this has been talked about by people who’ve studied the way that social media platforms like Facebook and Twitter work. People become addicted to the dopamine rush of anger that they get from reading a news story. And we just sort of sociopathically crank this stuff out there and dump it on audiences without thinking about what it does to their mental health. But I think most people would agree that if they stopped following the news for any length of time, and you notice this when you go on vacation, that you’re just happier."

Does Taibbi think that writing so candidly about this connection may be hazardous to his health and his career?

"Actually, I found that writing about all this has been really therapeutic for me because I had all this bottled up for years because I’ve been struggling against it in the business. And my hope was in writing this and showing people how the business looks from the inside and what the thought process of a person who creates media content is, that people will be able to protect themselves from some of this a little bit, that maybe they would not get so upset about things that are designed to get them upset. So it’s helped me calm down a little bit. And I hope the book also helps people not take things so seriously," he said.

What is the connection between the film version of Brett Easton Ellis' novel, "American Psycho," and the way we consume the news?

"There’s a scene where (the serial killer Patrick Bateman) and his friends are in an upscale restaurant in SoHo and they’re talking about the news that day. And they’re explaining to each other how much they care about homelessness. One of them talks about Sri Lanka and how all of the Sikhs are massacring Muslims. Of course, he gets it wrong. That’s part of the joke. But the idea is that the news in 'American Psycho' was just another consumer product that was part of his outward expression of normalcy whereas in fact, in the inside, he was crazy. But we do this a lot in America. We talk about the news as if knowing about it is doing something about it. And we think that by educating ourselves about how things are terrible in certain parts of the world or certain problems that are going on, that alleviates the guilt that we feel about not changing the world in the right way, whereas, in fact, in many cases, it’s like something that we wear."

In "Hate, Inc.," Taibbi writes: "I work in this business and don’t know whom to trust." So how does he do his job?

"It’s very difficult. In the last couple of years, that whole segmented demographic problem has gotten I think so intense that I don’t know if even the most quote-unquote reputable newspapers are always accurately representing things or if they’re leaving things out because they’re afraid to lose their core audiences," Taibbi said. "So I actually spend a lot of time now when I want to know about a news story, I just put on my journalist hat and start calling sources to ask them rather than read the news, which is kind of a sad thing. And I think that’s where we’re headed in the future is that people are going to increasingly turn to alternative sources because they’re going to not trust the traditional sources as much anymore."