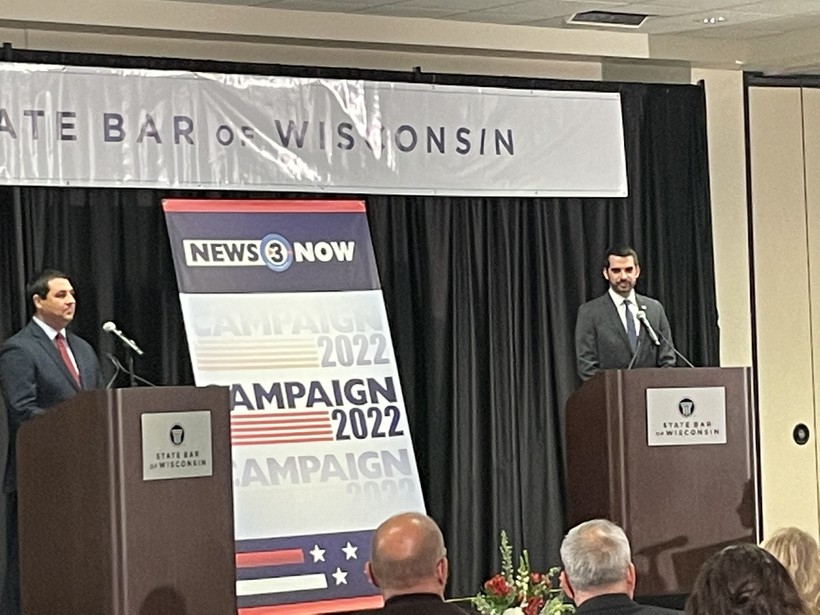 Democratic incumbent Josh Kaul, left, and his Republican challenger Eric Toney face off in a debate in the race for Wisconsin attorney general at the State Bar Association headquarters in Madison on Thursday night, Oct. 27, 2022.

Kaul and Toney laid out differences on abortion, gun laws and the state's crime lab among other issues
By Sarah Lehr
Share:

Democratic Attorney General Josh Kaul and Republican challenger Eric Toney were face to face in Madison for a debate Thursday night, less than two weeks before the election Nov. 8.

Below are some key takeaways from the debate.

Kaul is suing in an attempt to block an 1849 state law that bans abortions unless they're done to save a pregnant person's life. He's also pledged not to enforce the law, which went into effect in Wisconsin after the U.S. Supreme Court overturned Roe v. Wade,

"We always have to make decisions about where we're putting our resources," Kaul said. "I believe they should go to investigating and prosecuting homicides, sexual assaults, drug trafficking cases, the most serious crimes in the state."

Toney said he would enforce the law.

"We needed an attorney general, that's not going to pick and choose when to enforce the rule of law, even if they disagree," he said.

But Toney said his comments were being taken out context, and that he had responded to question about DAs choosing not to prosecute certain crimes.

"We have a couple of statutes on the books right now, election fraud and state ethics codes, that actually allow a district attorney to prosecute in an adjoining county if the DA of that county refuses to prosecute, so I use it as an analogy to say our attorney general should have authority if a DA is refusing to prosecute, and that would be another option," Toney said Thursday. "I never expressly advocated for it."

Both Toney and Kaul said the 1849 law, as it currently stands, does not allow people to be prosecuted if they leave the state for an abortion.

Toney took aim at Kaul over unfilled positions at the Department of Justice and charged that Kaul has "failed at his number one campaign promise of fixing our crime labs, taking over twice as long as former Attorney General Brad Schimel to process DNA evidence."

Kaul has said the coronavirus pandemic contributed to a temporary slowdown. He also said when the department adopted probabilistic genotyping, the process became more comprehensive but also more time-consuming and complex.

"What that means is that we are able to get DNA matches in more cases, so we were able to solve more cases," Kaul said during the debate.

Both Toney and Kaul acknowledge the legitimacy of the 2020 election, the results of which have been affirmed by a statewide canvas, a partial recount and multiple court cases.

Toney defended his decision to prosecute multiple cases of voter fraud in Fond Du Lac County as district attorney, while acknowledging that there was no widespread fraud in the 2020 election that would have overturned the outcome.

"I've been the most vocal statewide Republican candidate that we cannot decertify the election, it should not happen that there was no widespread voter fraud that would have overturned the results of the election," Toney said.

And, in response to a question, both candidates committed to accepting the results of the 2022 election.

Kaul and Toney differ on whether the attorney general should call for tighter gun control.

They were asked about a 2022 state Supreme Court decision that determined a disorderly conduct conviction did not amount to a "crime of domestic violence" and therefore could not stop someone from obtaining a concealed carry gun license. In the case, a man broke into his estranged wife's home and threatened to kill her, and later pled guilty to disorderly conduct over the incident.

Kaul said yes in response to a question about whether state lawmakers should amend the law to ensure a disorderly conduct conviction could stop someone from getting a concealed carry permit. He's also called for universal background checks and extreme risk protection orders, often called red flag laws.

In contrast, Toney said Wisconsin needs to focus on enforcing the gun laws that it already has on the books and added that he supports mandatory minimum sentencing for people convicted of violent gun crimes.

Kaul is backing Democratic Gov. Tony Evers in a lawsuit filed earlier this year against companies over PFAS contamination.

Asked whether he would withdraw from the suit if elected, Toney said he couldn't prejudge a specific case until he saw all the information.

"I think the reality is that he's likely to withdraw Wisconsin from that (lawsuit)," Kaul said.

Thursday's debate was held at the State Bar Association of Wisconsin and sponsored by WISC-TV and WisPolitics.com.

Related Links:
Tony Evers, Tim Michels agree: Evers’ veto pen is the only obstacle for more than 100 GOP bills
The repeal of abortion rights in Wisconsin reshaped 2022 political campaigns. Will it change outcomes?
Violent crime is up. Here's how Wisconsin’s candidates for governor say they'll tackle it.