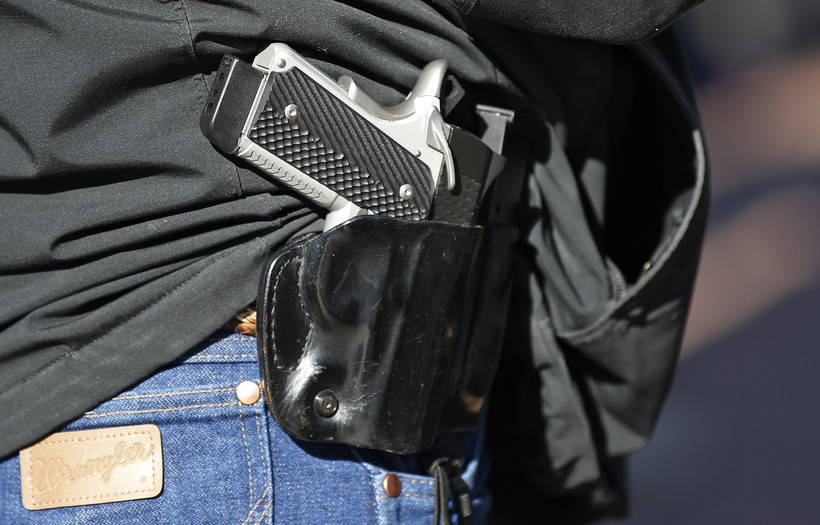 A unanimous ruling of the Wisconsin Supreme Court found the state cannot bar those convicted of disorderly conduct from getting a concealed carry gun permit. Sue Ogrocki/AP Photo

A man convicted of breaking into his estranged wife's home and threatening to kill her with a two-by-four board did not commit a "crime of domestic violence," the Wisconsin Supreme Court ruled. He will be allowed to carry a concealed gun in Wisconsin.

The court's decision was unanimous. But in a blistering concurrence, liberal Justice Jill Karofsky blasted the law that allowed for the ruling, calling it "as nonsensical as it is dangerous" and called on lawmakers to fix what she characterized as a "dangerous loophole."

In 1993, Daniel Doubek of Door County broke the glass on the front door of his wife's home, reaching in to unlock the door from the inside. When he found her inside, he raised a slab of lumber over her head and told her she "was dead."

Doubek's wife was home alone with their 4-year-old daughter at the time. She shouted for help from neighbors; outside the home, Doubek continued to threaten her, saying he didn't care about the consequences if he killed her. After about 30 minutes, he left. He would later plead guilty to disorderly conduct, a misdemeanor charge.

State and federal laws ban those who've been convicted of a "misdemeanor crime of domestic violence" from possessing a gun.

In 2016, Doubek applied for and received a permit to carry a concealed handgun in Wisconsin. Three years later, the state Department of Justice led by Democratic Attorney General Josh Kaul reversed the state's decision to grant the permit, citing Doubek's history of domestic violence. Doubek appealed, and a circuit court judge agreed with the state. The state Supreme Court's ruling Friday overrules that decision, finding that the crime Doubek, now 56, pleaded guilty to did not constitute one of domestic violence.

In oral arguments before the state Supreme Court in December, Doubek's attorney, John Monroe, argued that by the legal definition, a charge of disorderly conduct can never be considered domestic violence. In the court's opinion, Justice Brian Hagedorn agreed, and pointed to U.S. Supreme Court precedent that requires courts to "ignor(e) the particular facts of the case" in making such determinations.

The ruling is "legally correct," Karofsky wrote, but it ignores the real-world consequences of allowing gun permits for those with a history of domestic violence.

"In the realm of domestic violence, threats to kill, like the one Doubek made to his wife, more than double the risk of femicide," Karofsky wrote, citing a study in the American Journal of Public Health. And access to a gun causes that risk to skyrocket.

"The numbers are staggering," she wrote. "A domestic abuse victim is five times more likely to be killed by her abuser when the abuser has access to a gun."

That's the reason federal law and state laws ban domestic abusers from some gun rights, and Karofsky argued it should be enough to prompt legislators to amend criminal statutes to avoid an outcome like the one in Doubek's case.

In her concurrence, she offered three ways legislators could fix what she called a broken outcome of the current law: The state Legislature could create a new domestic violence law specific to "threatened use of a deadly weapon;" it could make "domestic abuse" its own category of crime, rather than dealing with abuse cases under assault or disorderly conduct statutes; or it could pass a law authorizing courts to judge whether a given conviction constitutes domestic violence.

"Only the Legislature," Karofsky wrote, "may close this dangerous loophole."