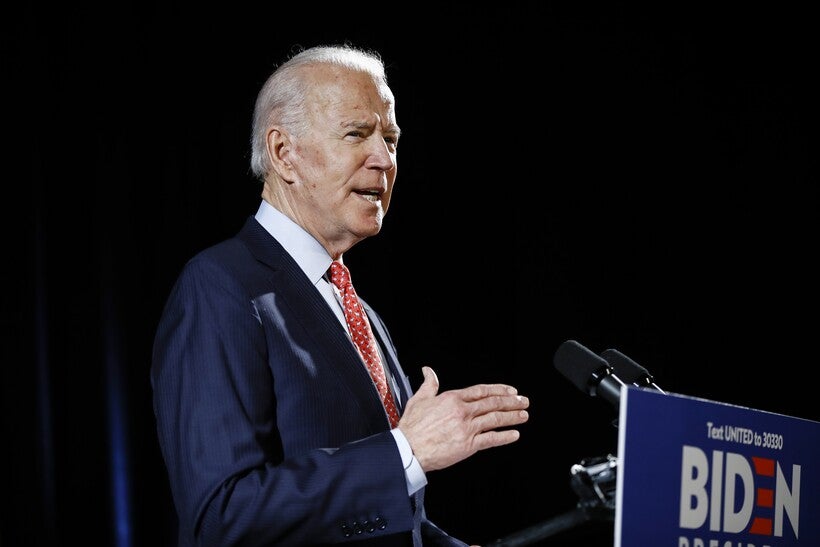 Nearly a week after in-person votes were cast, Joe Biden has emerged as the winner of Wisconsin's Democratic presidential primary election.

The Associated Press called the race before 5 p.m. Monday.

Preliminary totals from the AP as of 10:30 p.m. Monday with 95 percent of precincts reporting show former Vice President Biden ahead of U.S. Sen. Bernie Sanders of Vermont by a margin of 63 percent to 31 percent in the primary election. President Donald Trump was uncontested for the Republican primary election.

Biden posted a video to Twitter Monday night thanking Wisconsinites for turning out to support him amid the COVID-19 pandemic.

"But as grateful as I am for your support and as proud as I am of the commitment and courage shown by so many in Wisconsin, it should never have come to that. No one should ever have to choose between their health and our Democracy," Biden said.

I am grateful to have the support of so many Wisconsinites and proud of the courage and commitment folks showed during last week's primary — but it should never have come to that.

No one should ever have to choose between their health and our democracy. pic.twitter.com/D4PpzYkter

He continued by saying that Republican state lawmakers unnecessarily put lives at risk by not working with Gov. Tony Evers to find an alternative solution to in-person voting April 7.

While Evers had initially favored leaving the election date as is, the governor called for a special legislative session on April 3 to push back the election and mail absentee ballots to every registered voter. Evers then signed an executive order April 6 postponing the election until mid-May. Republican leaders in the Legislature rejected all of Evers' proposals and filed suit to overturn his order.

Biden said he hoped voters remembered the Republicans' actions when they cast their ballots in November's general election.

"Now, last week's primary in Wisconsin also sent a giant warning flare to the nation," said Biden. "We have to deal now, and I mean now, with figuring out how we’re going to conduct a full and fair and safe election in November. And that means providing our citizens with all the options for the exercise of their right to vote by mail and in-person."

Wisconsin's April 7 primary was heavily affected by the COVID-19 pandemic. The state saw more than 1 million requests for mail-in ballots, according to elections officials, leading to a court order giving clerks extra time to count votes and delaying the announcement of results until Monday.

There was also extended political and legal wrangling over whether to hold the election during a public health crisis. It eventually went ahead as scheduled, but was marked by logistical hurdles and long lines in some areas because of sharply reduced numbers of polling places.

On Wednesday, the day after the election, the results of Wisconsin's Democratic primary were rendered less relevant when Sanders announced he was suspending his presidential campaign. Sanders said at the time that victory was virtually impossible since he trailed Biden by around 300 delegates. Sanders officially endorsed Biden earlier Monday.

The convention was set to run from July 13 to 16 in Milwaukee. But earlier this month, DNC officials announced it would be postponed until the week of Aug. 17 over concerns about the COVID-19 pandemic.

Wisconsin's primary was the first to be held after a string of Biden primary victories in March. On March 17, Biden beat Sanders by double digits in Florida, Illinois and Arizona.

On April 1, a Marquette University Law School poll found around twice as many Democrats likely to vote in the state's April primary favored Biden over Sanders. That was a major shift from a February poll that showed Sanders leading Biden 29 percent to 15 percent in a field that still included multiple other candidates.