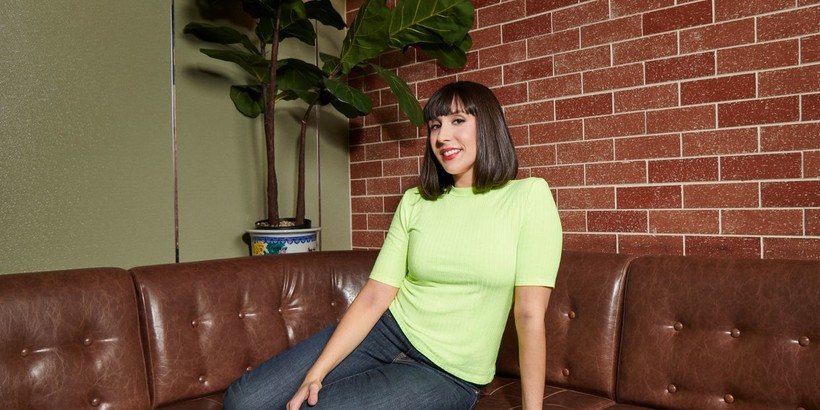 If you watch "The Late Show with Stephen Colbert," then you're familiar with the voice of Jen Spyra. She's the show's announcer and a former staff writer.

"Big Time" features a variety of comical characters, including Mister Mittlebury, a millennial pig who performs improv; a time-travelling starlet from the 1940s who tries to make her mark in contemporary Hollywood; and the world's very first influencer — a prehistoric cavewoman named Oola.

"I love playing with genre because genre has defined guideposts and rules, and so if you know them, you can subvert them and tell a different story," Spyra told WPR's "BETA." "So I only play with the ones that I have a deep affinity for. As for writers, there's a bit of a shortcut happening. The audience already knows the world in terms of world building. I just need to hew to the rules, but I'm not starting something new."

Spyra says she's especially proud of the book's title story in terms of how much she subverted the genre to tell a different kind of story.

She said it was the most challenging story to write because of its length — a novella clocking in at just under 100 pages.

"I kept pushing myself and breaking past what I'd done before," she said. "Basically, the trick there was OK, I want to deconstruct this genre. So I get to play with all of the genre stuff, but it's so freaking long. I have to also tell an emotionally gripping story that the reader cares about, you know. So with the short stuff, you can get by on style and jokes. But when you're asking someone to hang out for that long, it also has to be absorbing on a more fundamental story level."

The novella "Big Time" is clearly influenced by classic noir films and fiction. The protagonist Ruby Russell delivers first-person hard-boiled dialogue, which is only fitting since she's a starlet living in the 1940s whose early years were no picnic. Ruby makes this very clear in the novella's opening lines: "Look, I'm not gonna sugarcoat it for you. Hollywood is like a big fat man with a snarl on his face and a knife in his hand."

"She ends up through a sort of supernatural happenstance, getting flung into the future and wakes up on the beach in Venice, in modern day L.A., in the middle of a bikini boot camp class, and has to kind of find her bearings and figure it out and claw her way to the top," Spyra explained.

Spyra says she was partly inspired by Victoria Wilson's massive 1,000-page biography of Barbara Stanwyck, which only covers the first 33 years of the legendary movie star's life.

"It talks about her early life and her rise to the top in Hollywood. And it's such a brutal, traumatizing story. And I thought it would be really, really fun to tell a story like that comedically."

Another influence was Stanwyck's 1933 film, "Baby Face," which was made the year before Hollywood implemented the Hays Code which served as a method of self-censorship.

"It's so shockingly obscene," Spyra says of "Baby Face."

"Of course they don't actually show things, but what they're referencing is so dark and essentially it's not a Hollywood rags to riches story. It's just a woman's rags to riches story. It's an incredibly ambitious, ruthless young woman who will really do anything to get ahead. And what she ends up doing in that movie is sleeping her way to the top. It felt like a very rich fish out of water premise that I could play with."

One of the recurring motifs Spyra uses to great effect is to take something contemporary and set it in a different time period to create one of comedy's greatest concepts: the clash of context. The best example is "The First Influencer."

Cold, Flu, COVID-19 Or Allergies: Which One's Causing My Symptoms?
Wisconsin Legislature Asks US Supreme Court To Intervene In Federal Redistricting Case
Wisconsin Schools Called Police On Students At Twice The National Rate. For Native Students, It Was The Highest.
USA Earns Landslide Ryder Cup Victory In Wisconsin
After Years Of Racist Slurs And Treatment, Former Baraboo Student Says 'A Weight Was Lifted' After Settlement Reached