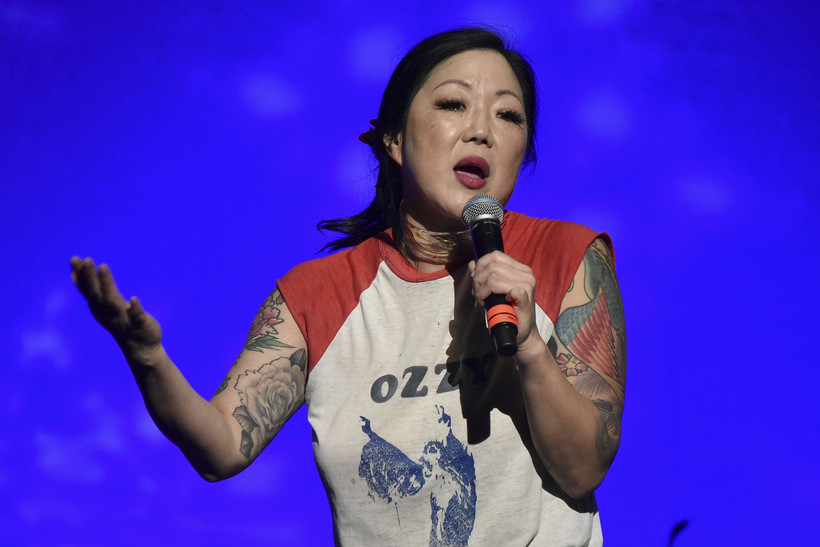 Margaret Cho is given an opportunity in Jeff Yang's new book to voice her side of the story recapping their falling out over Yang's harsh criticism of Cho's short-lived sitcom, "All-American Girl." Richard Shotwell/Invision/AP Photo

The co-author of 'Rise' is building both a time capsule and a blueprint for Asian American representation
By Adam Friedrich
Share:

For over 30 years, Jeff Yang has been a media action leader in America's Asian community. In 1989, when he was graduating from college, he convinced several friends to relocate to Manhattan with him to launch A. Magazine.

"I stood on my bed in my dorm room, exhorting these friends of mine to move with me to New York City and try to launch an Asian American magazine because at the time, magazines were where it was at," Yang recalled.

"If you had a magazine, then you could kind of say your community, your part of the world existed in some fashion, like planting a flag," he said.

Now, Yang has corralled his fellow action leaders Phil Yu (founder of the Angry Asian Man blog) and Philip Wang (co-founder of Wong Fu productions) to author perhaps an even more comprehensive project in Asian American representation with "RISE: A Pop History of Asian America from the Nineties to Now."

Yang told WPR's "BETA" that the book developed out of a series of conversations he, Yu and Wang were having that were not unlike the ones he and his A. Magazine co-founders had in the dorm rooms. They thought the best outlet for them was this three-decade snapshot of Asian Americans through the lens of pop culture.

"Different portions of those 30 years represented something really pivotal in the way that Asian-Americans were both depicted in the world but also the way we saw ourselves. And yet it's also a portion of our history that has really gone mostly untold and certainly undocumented," Yang said.

"So, we first got together to put together the idea for this book under the assumption that would be sort of like filling in that donut hole, just celebrating all the different ways in which the last three decades have been pivotal to the evolution of our community," he said.

However, in the wake of a global pandemic that cast an accusatory and dangerous attention on many swaths of Asian communities, the book took on a different tone.

"We had this global pandemic, and with that came this unprecedented wave, it felt, of anti-Asian hostility and xenophobia, and we realized that more than just celebrating what had happened to the last 30 years, we also felt the need to almost put it in a time capsule or a hope chest," Yang said. "If everything were to somehow go away, if all the hard-won success we'd gotten to had started to just shatter under the weight, we would have something to rebuild with. We'd have a blueprint."

Yang, Wu and Wang capture the free-flowing vibe of blogs and podcasts in "Rise." The book assembles all these touchstones in Asian American pop culture in a fun structure of essays, poems, thought experiments, cartoons, dialogues and more. Furthermore, they are delivered in both a universal and personal way.

For instance, Yang discusses how the Hong Kong cinema golden age of the late '80s and early '90s helped heighten representation of the Asian community, but he addresses it through the intimate lens of memories of Chinatown theater visits and the feeling like culturally, for once, he was ahead of the curve.

"It was the first time we actually started to see Asian faces across the board. We certainly weren't seeing that in Hollywood, and it made a huge difference because it helped us recognize that we didn't have to actually just be slotted into a single kind of role — the sidekick, the villain, the temptress," Yang said.

"It was a twofold thing," he continued. "On the one hand, it really stretched our own horizons by helping us see the world and ourselves differently. But also, it made us cool for the first time."

Yang also opens up the book to famed Korean comedian Margaret Cho to voice her side of the story recapping their falling out over Yang's harsh criticism of Cho's short-lived sitcom, "All-American Girl."

In the early '90s when network executives were essentially handing out sitcoms to every popular comedian and Cho was one of the most popular, Yang was a TV critic at the Village Voice. He was tasked with reviewing ABC's "All-American Girl."

"It was not a good show. It was a show that, more importantly, I thought, really betrayed Margaret's own comedy herself," Yang said. "She's raw and out there and just way over the top and in this show, she even calls herself kind of Fonzie from 'Happy Days' as opposed to who she actually is in real life. And I wrote that into the review honestly."

Cho contacted Yang and lambasted his reaction, stating that because he was Asian, it would carry more negative weight for the network heads.

"She wasn't entirely wrong because the show got canceled after 19 episodes. They didn't even really give it a chance to evolve and to shift its focus to align more with Margaret," he said.

"I wanted to amplify and elevate and give people a chance to decide for themselves what they thought was worthy," Yang continued. "Because we, as Asian Americans, had no room for mediocrity, much less disaster. If we did something wrong, then it would kind of like salt the earth for the next two decades, which is kind of what happened with 'All-American Girl.'"

"What's really interesting about Hudson and many of his peers is that the things that we had to actually defend or constantly define or rationalize are things that he sort of takes for granted," Yang said.

"The world is so different for him. And so, I think for him, it was as much as anything else a reinforcement of how far we'd come when he played a role that was anchored in such a very different view of an Asian-American reality from the one he was actually experiencing," Yang said.

Yang is hopeful that lengths achieved on the journey from "All-American Girl" to "Fresh Off the Boat" and beyond will allow the same leniency in cultural currency afforded to other communities moving forward.

"We have been held to the standard of never being able to be mediocre and the luxury to be mediocre is something which more than anything else is a core part of feeling like you've been accepted in a society — because not everything is going to be a blockbuster and not everything's going to be a critical success. But just because you have failed or done middling should not mean that you're exiled to the wilderness forever. ... That luxury to be mediocre is perhaps what I wish for most for Asian America," he said.