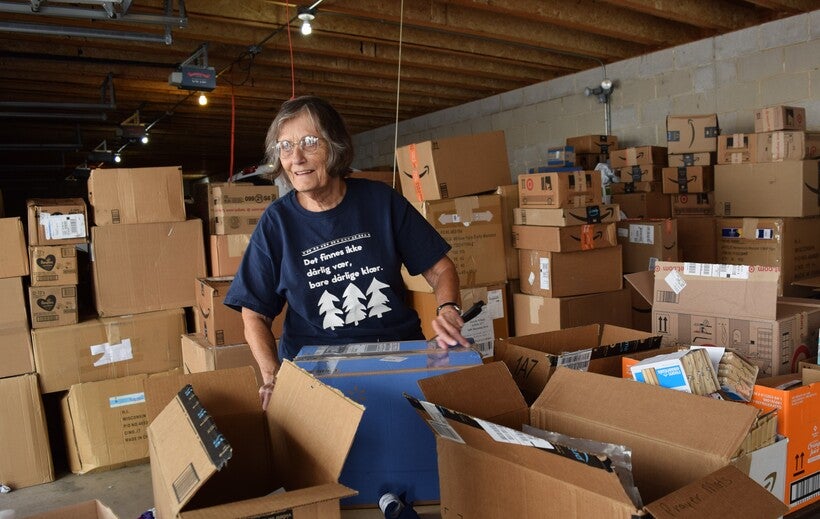 A volunteer for Catholic Charities at the Diocese of La Crosse sorts donations for Afghan refugees living at Fort McCoy on Thursday, Sep. 9, 2021. Hope Kirwan/WPR

'It's Our Mission Now To Help': Nonprofits Work To Meet Needs Of Nearly 13K Afghan Refugees At Fort McCoy

Volunteers Say Refugees Need Clothing, Personal Items, Emotional Support As They Wait To Finish Immigration Process At The Base
By Hope Kirwan
Share:

In a garage behind the Catholic Diocese of La Crosse, volunteers sort through donations for the thousands of evacuees from Afghanistan, now staying at Fort McCoy in Monroe County.

Much of the work involves opening a mountain of Amazon and Target packages. The group set up online registries of needed items so people could send donations directly to the diocese. They’ve been collecting items like clothing, toiletries, backpacks, diapers and baby formula.

Karen Becker, marketing director for Catholic Charities, said the generosity of the community has been overwhelming at times, with more donations coming in than they can sort.

But the need of the people arriving at Fort McCoy has been just as staggering. 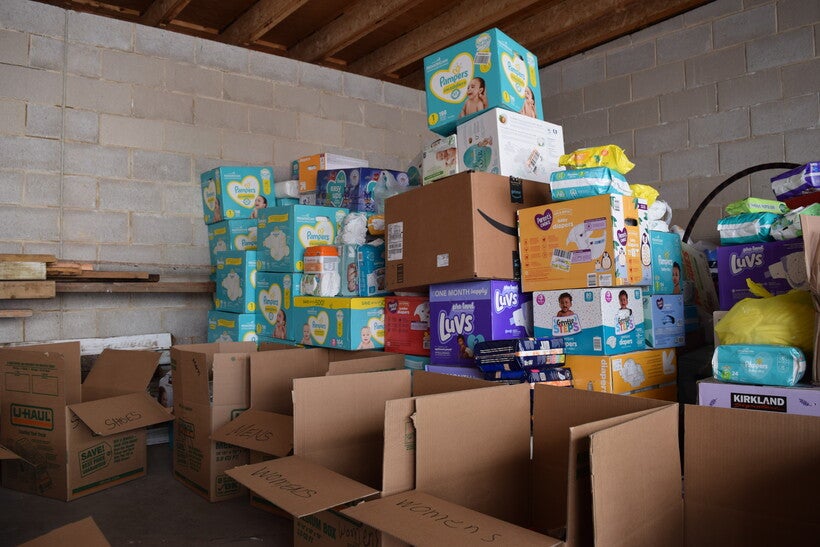 Donations of diapers and baby wipes collected by Catholic Charities at the Diocese of La Crosse. A volunteer estimates almost a third of the evacuees staying at Fort McCoy are children. Hope Kirwan/WPR

"The first few flights (of evacuees) I think came with maybe a suitcase for the family. A lot of them now, by the time they get here, have nothing. They just are getting on the planes and coming someplace safe, and I feel it's our mission now to help them with what they need," Becker said.

A spokesperson for Task Force McCoy-Operation Allies Welcome, the task force hosting the evacuees on the base, said there are around 12,500 people from Afghanistan staying there.

Last week, Democratic U.S. Rep. Gwen Moore, raised concerns about reports of inadequate care and staff speaking to refugees "in a rude condescending manner." The task force spokesperson said officials are working to address all concerns raised and are "dedicated to treating our Afghan guests with dignity and respect."

While government officials are focused on large, operational issues on the base, nonprofits are stepping in to help with humanitarian needs. In addition to Catholic Charities, veteran-led Team Rubicon, the Salvation Army and the American Red Cross have all been helping to welcome the refugees.

Jenelle Eli, senior director of communications for the Red Cross, said volunteers for her organization try to make refugees comfortable from the moment they arrive.

In the first few hours after arrival, Eli said her organization focuses on getting people medical items that they left behind in the rush to evacuate, such as eyeglasses, prescription medications, canes and wheelchairs.

She said the group’s definition of basic aid after a disaster has also evolved in recent years to include access to Wi-Fi.

"After any crisis, people want Wi-Fi because they want to be connected to their family and friends and they also want to feel empowered to help themselves," Eli said. "The U.S. government is able to help (refugees) find things like housing or a new job. But when people have access to Wi-Fi, they can also do their own research."

Eli said volunteers try to show people that they’re in a safe place. Often that’s through a kind word or a smile, but Eli said wearing masks during the pandemic has forced them to rely on other cues like having open body language. She said the evacuees have gone through a traumatic experience and sometimes need someone to listen as they process what happened and work through fears about what comes next.

The first refugees arrived at Fort McCoy almost a month ago. Federal officials at the base have said they hope to finish people’s paperwork and medical screening in 14 to 21 days after arrival. But a spokesperson for the operation did not respond to WPR when asked how quickly the process is moving and how many people have left the base.

Becker and her volunteers from Catholic Charities are working to provide a comfortable space for refugees to spend their time while they wait.

Becker estimates almost a third of the population at the base are children. Their group recently set up several women and children’s centers among the barracks where refugees are temporarily living. Half of each center is a place for children to color or play games and the other half is a respite area for women to gather together. 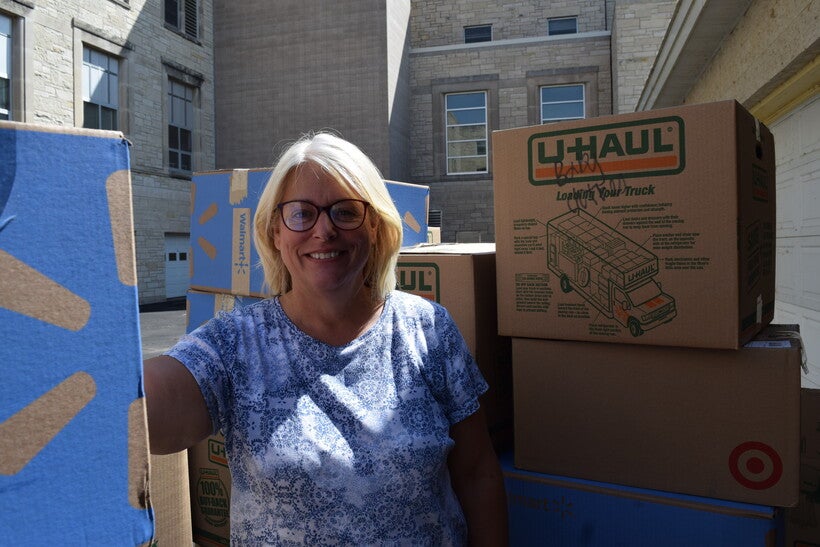 Kathleen Becker, marketing director for Catholic Charities at the Diocese of La Crosse, said the response from the community has been overwhelming at times, with more donations coming in than they can sort. But she said most evacuees from Afghanistan are arriving at Fort McCoy with nothing and it's her groups job to help them get what they need. Hope Kirwan/WPR

"We’re assessing what they like to do, how they like to spend their time," Becker said. "We’ve had some large tea kettles donated and in the afternoons, we’ll also be offering these women a place to gather and have tea and build their sense of community and their wellness and help their lives return a little bit to normalcy as best we can."

Becker said one popular addition to the centers has been three sewing machines and fabric donated by volunteers.

"One of the Afghan women sits down and without a pattern, without any measuring tape, just fits another woman in a long-sleeved, knee-length garment that fit her beautifully, and she did it in an hour and a half," Becker said. "We realized that there is this amazing group of Afghan women who are talented seamstresses who would love the activity of being able to sew for children, for others as colder weather comes on."

She said many of the men are helping interpret for the different organizations providing services. She’s also seen them playing soccer or working to find Wi-Fi around the base.

Becker said she’s not sure how long refugees will be living at the base, but Catholic Charities is already thinking ahead about collecting winter coats and boots.

When the refugees do leave Fort McCoy, they’ll be assigned to one of nine nonprofit refugee resettlement agencies working across the U.S.

Laura Thako is a development associate for the U.S. Committee for Refugees and Immigrants at their office in Iowa. She said when an individual or family is assigned to their organization, the group typically has a week to set up housing before they arrive. They then work with the arrivals to help them get settled in their new home.

"Everything from helping them get their social security cards, having the children enroll in school, helping them find an English language class and look for work, all of these things that need to happen in the first 90 days after they arrive," Thako said.

Thako said they’ve only settled one Afghan family that evacuated in the U.S. withdrawal so far. But they’re anticipating more evacuees will arrive in the next week or two.

She said one thing that could differ from the typical resettlement process is what kinds of services will be available to the large number of Afghans who are here under humanitarian parole. Thako said the status is rarely used in the immigration process and does not make someone eligible for public benefits and the typical employment services that resettlement agencies provide.

"So they would be receiving a parallel set of scaled-back services. There is work being done at the federal level to address that and hopefully soon, but right now that's where things stand," Thako said.

During a briefing last week, a senior U.S. government official said Afghans granted parole will receive U.S. State Department-funded assistance through the Afghan Placement and Assistance Program. This includes assistance from local agencies with housing and basic necessities like food, clothing and furnishings during the first 30-90 days in their new communities.

The official said placement of the evacuees will prioritize reunification with family and friends already living in the U.S. and consider other factors like "reasonable housing, job opportunities and community capacity."

"Because of the (large number of people needing to be resettled) and how quick this process is going to be taking place, there's not a lot of back and forth on (placement)," Thako said.

Her office has committed to welcoming 125 Afghan refugees, on top of the 40 special immigration visa holders they had already committed to hosting. But she said her office and other local agencies may be asked to take on more people before the end of the operation.