An Afghan evacuee looks at a piece of clothing covered with butterflies and trees at a donation facility run by U.S. Soldiers and civilians at Fort McCoy, Wisconsin, Sept. 7, 2021, as part of the Operation Allies Welcome effort. Spc. Rhianna Ballenger/U.S. Army

US Rep. Gwen Moore Calls For Federal Investigation Into Reports Of Inadequate Care For Afghan Refugees At Fort McCoy

Base Spokesperson Says They're Working To Address Concerns, Continue To Distribute Donations To Refugees
By Hope Kirwan
Share:

U.S. Rep. Gwen Moore, D-Wis., is calling on the head of the U.S. Department of Defense to investigate reports of inadequate care for the refugees from Afghanistan staying at Fort McCoy.

Moore and fellow Democratic U.S. Rep. Ilhan Omar from Minnesota sent a letter to Defense Secretary Lloyd Austin III to conduct an investigation into "possible mistreatment and/or neglect" of Afghans staying at the base in Monroe County.

In the letter, Moore and Omar said their offices received reports of staff at Fort McCoy speaking to refugees "in a rude condescending manner" and referring to them as animals. They also said they had received reports of families lacking access to "basic necessities, including undergarments and feminine hygiene products."

"These families fled their homes and left everything behind, and many arrived here literally with only the clothes on their backs. They should be treated with compassion and dignity," the letter said.

Moore and Omar also called for a way for refugees to confidentially report concerns or mistreatment.

The letter comes a day after the Wisconsin State Journal reported that two Afghan refugees said they haven't received new clothes since arriving at the base and have had to wait in line for hours to get food. The refugees arrived late August and early September.

Cheryl Phillips is director of public affairs for Task Force McCoy-Operation Allies Welcome, the task force hosting evacuees from Afghanistan to the base. She said in an email that the interagency team is working closely with the U.S. Department of Homeland Security and local officials to address all concerns raised.

"The Department of Defense and the interagency team supporting this whole-of-government initiative is dedicated to treating our Afghan guests with dignity and respect while we care for their needs," Phillips wrote. "A robust donation system has been established to distribute items such as clothing, undergarments, shoes, baby items and personal hygiene products. We seek constant feedback from our Afghan guests on how the interagency team at Fort McCoy can improve their temporary stay."

Much of the donations for the evacuees are coming through local and national non-profit groups working with the base. 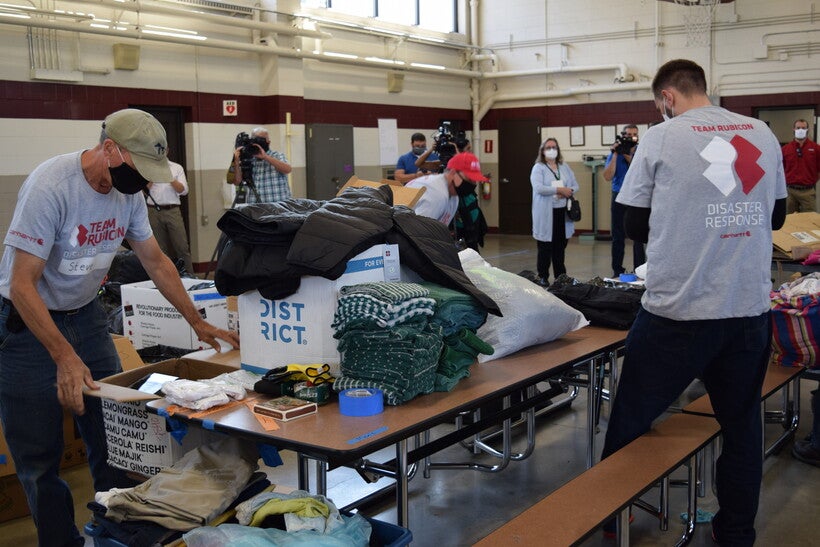 Team Rubicon and the Salvation Army announced on Thursday that they are kicking off a new drive to gather winter clothing for the refugees. The groups are hoping to receive new clothing items in small and medium sizes and shoes for both adults and children. In order to be culturally appropriate, the groups are looking for modest, plain clothing items.

The organizations receive and sort donations off the base and then send them with National Guard members and other Fort McCoy staff to be delivered to the base. Staff there have set up what they call "The Store," where evacuees can visit during certain hours to pick out a set number of clothing items that day.

Jeff Wagg, planning section chief for the clothing drive from Team Rubicon, said setting up the system for getting donations to the refugees was a learning process for his organization, which typically responds after a natural disaster. But he feels the system is now running smoothly.

"I think that when the base first started, they had some problems that you would expect, like, sure, waiting in line for food and maybe not having the right clothing," Wagg said. "All of the clothing that is requested is heading straight to the base. They should have everything they need now because it's all there and we’ve heard no reports that they’re lacking anything (except winter clothing and shoes)."

He said Team Rubicon is working to receive large donations from corporations at their sorting facility at the Wisconsin National Guard armory in Sparta. Individual donations can be taken to Salvation Army locations in La Crosse, Wausau, Madison and Milwaukee.

Wagg said the groups are looking for donations of new items because it's faster for volunteers to sort them for distribution.