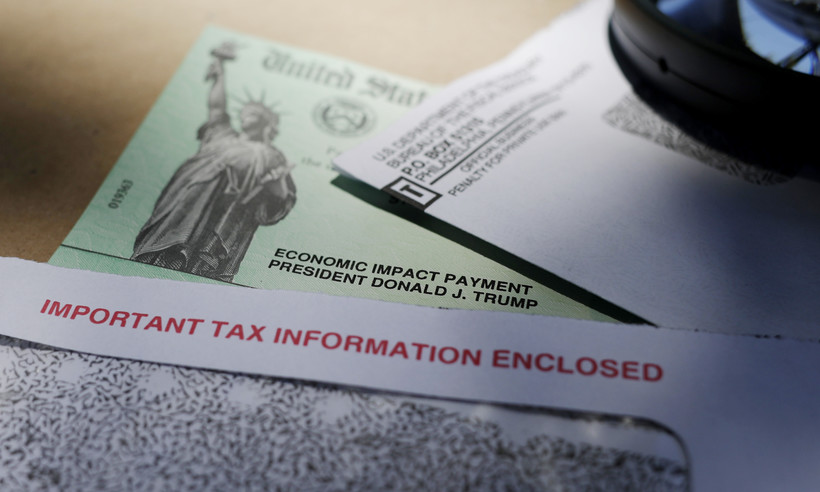 In this April 23, 2020, photo, President Donald Trump's name is seen on a stimulus check issued by the IRS to help combat the adverse economic effects of the COVID-19 outbreak. Eric Gay/AP Photo

Agency Says Majority Are Likely Individuals With Low Or No Income
By Rachael Vasquez
Share:

The IRS estimates that more than 111,000 Wisconsinites might not have claimed their federal coronavirus stimulus checks, but may still be eligible to receive the money.

The agency started mailing out tens of thousands of letters in Wisconsin last week notifying Wisconsin residents they might still be eligible for the payments, which are part of the federal CARES Act stimulus package passed by Congress and signed into law by President Donald Trump in March. The IRS is also warning of an Oct. 15 deadline for those who wish to claim their payments this year online.

According to an internal analysis done by the IRS, many of those who still haven't claimed their checks are people who aren't required to file a tax return because they have low incomes or no income altogether.

Tim Smeeding, a professor of public affairs and economics at the University of Wisconsin-Madison's Institute for Research on Poverty, said trying to reach the remaining people by mail might be a challenge because those with low incomes tend to move more often and might not have current addresses on file with the IRS.

"That's part of the problem: frequent movers," Smeeding said. "So if you have lower earned income, including people who move frequently, maybe some homeless ... when they try and contact you by mail, if the address isn't correct, then you're not going to know about (your stimulus payment)."

The IRS also acknowledged that some individuals who haven't claimed their payments might be homeless.

Without a way for the government to reach people who might have slipped through the cracks, Smeeding said, the best way to notify people would be through community organizations that provide services for the poor.

Christopher Miller, a spokesperson for the IRS based in Milwaukee, said the agency has teamed up with partner and stakeholder organizations that serve underserved communities in an effort to spread the word about unclaimed stimulus money.

Miller said there are three main requirements to be eligible: "If they are a U.S. citizen or a resident alien, they have a work-eligible Social Security number, and they can't be claimed as a dependent on someone else's return."

Individuals who are eligible could receive up to $1,200 under the program. Married couples stand to receive as much as $2,400, and people with children under age 17 could get an additional $500 for each child.

Among the zip codes in Wisconsin that the IRS is sending letters to, the three receiving the most letters include the cities of Milwaukee, West Milwaukee, Glendale, and Brown Deer.

Stimulus payments started going out to Americans in late April, and the IRS said that more than 160 million people nationwide have received payments under the program as of early September.

For those who don't file a tax return and who might still be eligible to receive their stimulus payment, the IRS has created a free online portal to claim your payment. The tool was created for individuals making less than $12,200 a year, married couples filing jointly who earn less than $24,400 annually, and those with no income.

The deadline to claim stimulus money through the online "non-filers" portal from the IRS is Oct. 15, but individuals can also wait until 2021 to claim the stimulus payment as a credit on their 2020 federal income tax return.

The IRS has released a copy of the letter it plans to mail in an effort to prevent fraud.