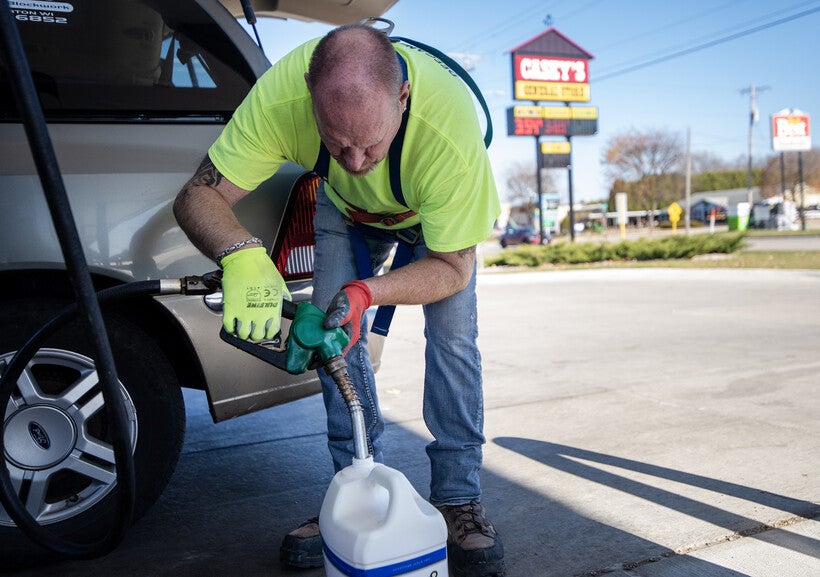 Tim Reynolds fills a tank with diesel to be used for machinery Wednesday, Nov. 2, 2022, at Casey’s in Edgerton, Wis. Angela Major/WPR

But economists say there's only so much candidates can do to stop it
By Bridgit Bowden
Share:

Carole Henning and her husband recently retired and moved back to Wisconsin to be close to their daughter in Waukesha. Although they're on a fixed income, she said they're not in any financial danger right now. Still, they have made adjustments at the grocery store, where costs are up 13 percent from last year.

"We are big grillers, so the meat market is one of our favorite places to be," she said. "Having watched some of those prices of things as simple as chicken breast just skyrocket … that is a huge impact on people who are living on a budget."

Henning considers herself a Republican, but she sometimes votes for Democrats. She hasn't decided who she'll vote for in Wisconsin's races for governor or U.S. Senator yet, but considers the economy to be her number one issue.

She's not alone. Milwaukee resident Amoun Sayaovong, a self-described independent voter who often votes for Democrats, said he thinks the economy is the most important issue because it affects everyone.

"Even though people will talk about abortion or crime, I think you are not affected by that on a daily basis," he said. "But when you have to go and pay 10, 20 percent more for your gas, that's something that affects you directly."

Inflation is hitting people across the country hard, with costs soaring for expenses like groceries, gas and electricity. And in closely-divided Wisconsin, it's top-of-mind for many voters.

In the latest Marquette University Law School poll, released Wednesday, 68 percent of respondents said they were very concerned about inflation, the most of any issue. 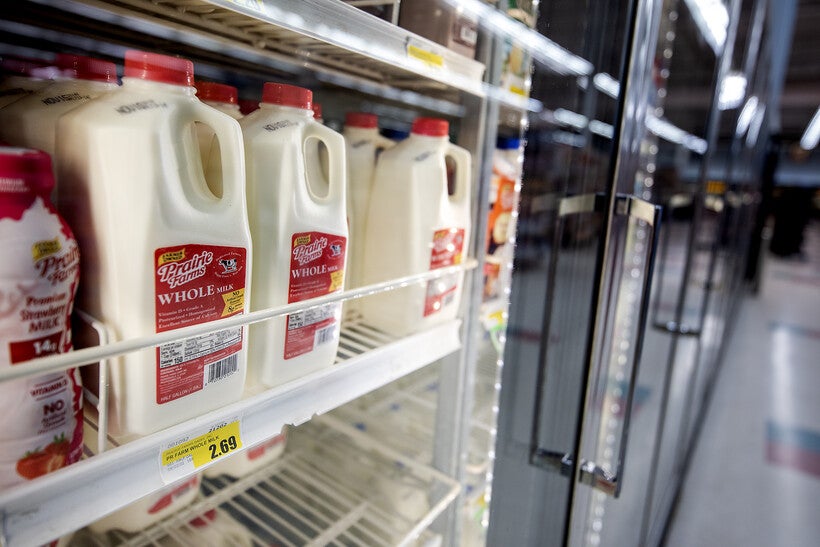 What is inflation and why is it happening?

Inflation is an increase in prices that happens when demand exceeds supply. The latest Consumer Price Index figures show an 8.2 percent increase in how much things cost Americans just since last year.

There are several reasons it's happening now, some of which stem from the COVID-19 pandemic. According to University of Michigan labor economist Don Grimes, the amount of money the federal government gave out in response to the crisis created a "tremendous imbalance."

"We dumped a lot of money, and so that increased demand," he said. "Supply just can't meet it."

The pandemic also disrupted global supply chains, Grimes said, pointing to COVID-19 shutdowns in China that have stalled production. The war in Ukraine created further obstacles for the supply chain.

All of this has led to inflation in the United States and around the world. A Pew Research Center analysis of 44 advanced economies found that consumer prices have risen substantially in nearly all of them.

"It was going to be a very painful period, no matter what," Grimes said. "They sort of avoided the pain of 2020 and 2021, economically, because they gave us so much money, but now we're getting the pain." 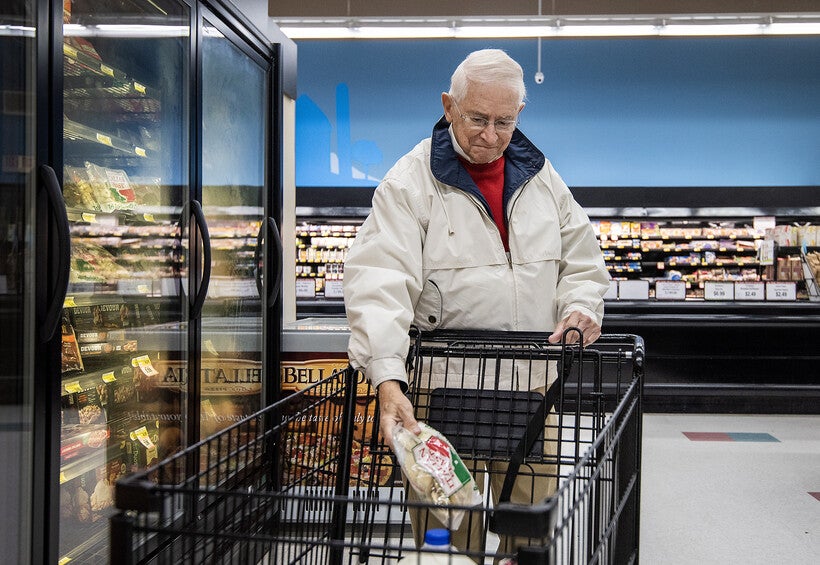 What the candidates are saying

As one of 100 U.S. senators, Barnes or Johnson could take votes that affect inflation one way or another. In August, Johnson voted against a measure called The Inflation Reduction Act that set aside about $370 million to reduce greenhouse gas emissions and imposed a new $300 million tax on corporations. Johnson called the plan a "Green Energy Fantasy" while Barnes said he supported it.

But according to Grimes, there's not very much that can be done at the state level to actually curb inflation.

"It's almost silly to ask any governor what they're going to do," he said. "Basically, the fiscal policy is really controlled by the federal government." 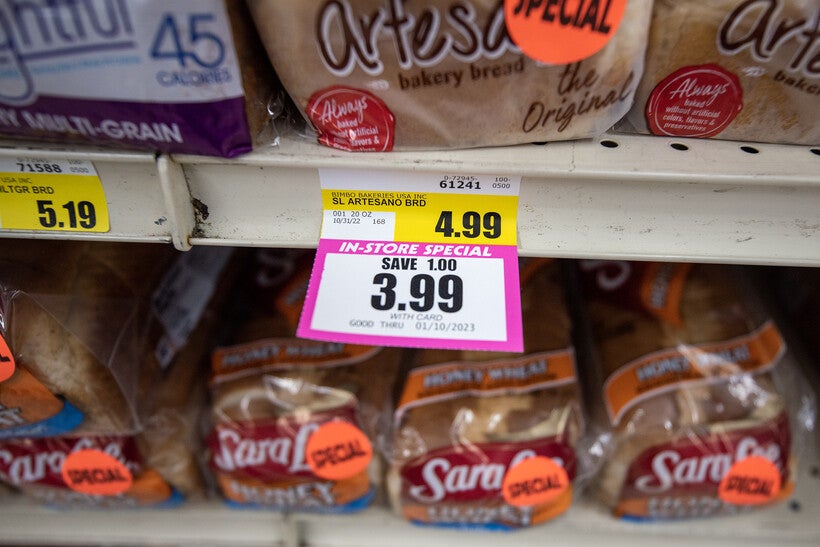 When it comes to inflation, there are basically two ways to stop it, Grimes said: increase supply or reduce demand.

Increasing supply — producing more of what people want to buy — is the best option, Grimes said. But it can take a while.

One way to lower demand is to get politicians to raise taxes on the middle class, and Grimes doesn't expect to hear any candidates advocating for higher taxes.

"I wouldn't hold my breath after the election either," he said. "That's why it always falls on the Fed."

The Fed, or the Federal Reserve, is the nation's powerful central bank that has raised rates several times this year already, including again on Wednesday. Because higher interest rates make borrowing more expensive, that has the effect of tamping down demand. Grimes said that should help slow inflation but is not without consequence.

"I have no doubt in my mind that the Federal Reserve will bring down inflation," Grimes said. "The problem is that they sort of have a blunt tool to do that, where they increase interest rates, and that it tends to cause a recession."

Grimes does expect to see a recession, although how severe it will be and how long it will last is yet to be seen. But before that, he expects inflation to be a major factor in how people vote. 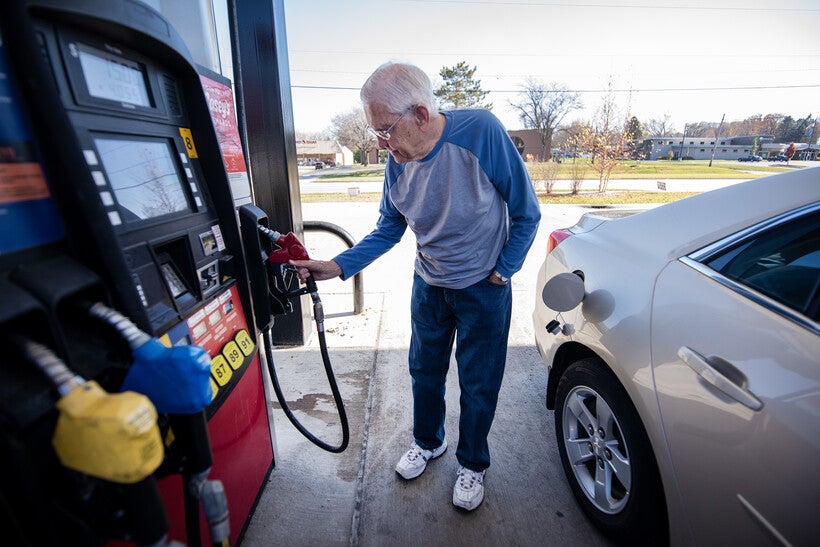 Grimes said historically when people perceive the economy to be bad, they vote against the party in power.

"I think it'll be a very good year for the Republicans," he predicted

But Grimes said political leaders can only tinker with the economy at the margins. Most change, he said, is driven by markets in aggregate and people acting jointly together.

"In general," Grimes said, "there's a disconnect between what voters think and what anybody in any leadership position can change."