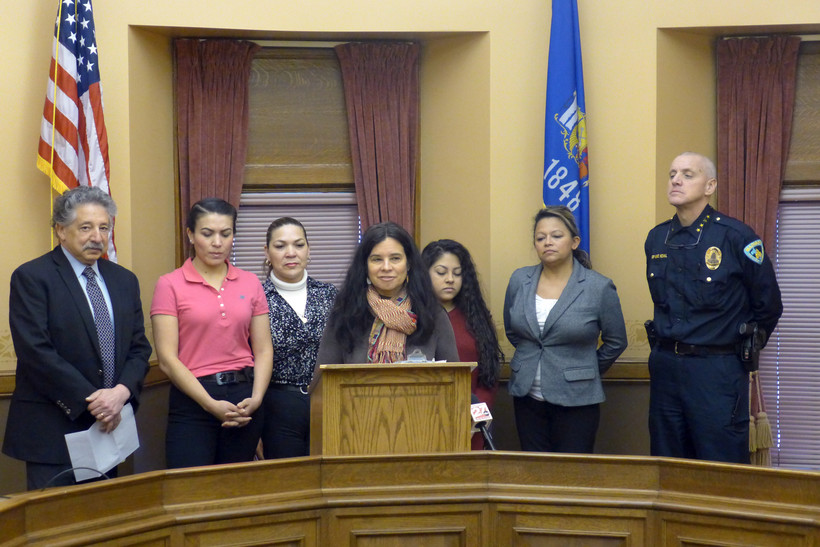 Groups Pushing Back Against Legislation By Staying Home From Work
By Gilman Halsted
Share:

Immigrant rights advocates say they expect hundreds of Latinos to stay home from work on Thursday to protest legislation they say will lead to an increase in deportations.

Wisconsin dairy farmers may bear the brunt of the so-called "day without Latinos," as Latino immigrants make up more than 40 percent of the hired help on state dairy farms.

Christine Neumann-Ortiz of the immigrant advocacy group Voces de la Frontera said she's heard from many who plan to skip work and com to to Madison on Thursday to protest, "insisting that they have to be here on the 18th to defend their families to defend their livelihood."

John Holevoet, a spokesman for the Wisconsin Dairy Business Association, said some farmers are worried about having enough workers to milk their cows, while other farmers plan to join the protest.

"We are not in favor of any legislation that would make our workers' lives more difficult," he said.

According to Holevoet, most dairy farmers believe immigration reform is a federal problem that needs a federal solution. In the meantime, he said farmers value their immigrant workers and "want them to have a safe, stable and successful life here in Wisconsin."

High school students in Madison and several other cities are also planning to walk out of class and march or board buses to the Capitol for a rally in support of immigrant workers.

One of the bills in question passed both the state Assembly and Senate Tuesday despite facing strong opposition from both immigrants and local officials in Madison and Milwaukee. It bars cities from creating local photo ID cards that immigrants can use when interacting with law enforcement. The Assembly also passed another bill that bars local governments from adopting ordinances that prevent police or other local officials from asking crime suspects about immigration status. The Senate is scheduled to take that bill up in March.

Madison mayor Paul Soglin said the Legislature is putting up roadblocks preventing local governments from serving immigrants in the community. At a news conference on Tuesday before the legislative votes, Soglin said the bills send a message that the state doesn't want immigrant workers to help grow the state economy.

"Tragically, we're now at a point where our state Legislature, which refuses to do the right thing on its own, is now looking at legislation that which is going to stop us from taking appropriate steps," Soglin said.

Madison Police Chief Mike Koval said his officers will shut down a lane of traffic on Thursday to allow protesters to march to the Capitol. He said the Legislature is "creating consequential messages contrary to what we believe is good public policy."

He said the legislation sends an overt message "that not all are welcome in this city."

Neumann-Ortiz said Thursday's protest is the beginning of a long-term effort to organize immigrant voters to go to the polls in November and vote for candidates who support comprehensive immigration reform.