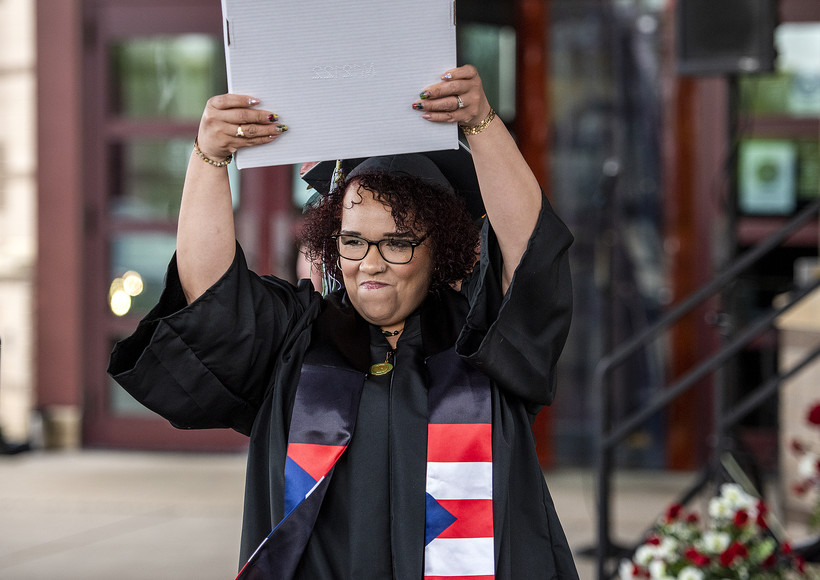 'I'm Here. I Made It': UW Students Reflect On A Year Of COVID-19 On Campus

The last of the University of Wisconsin's spring graduates will get their diplomas this weekend, capping off a year of unprecedented disruptions brought by the COVID-19 pandemic. With a sudden shift to online classes and heavy social restrictions aimed at preventing outbreaks, some students say they've felt trapped watching screens in their rooms — and for those returning next fall, they hope campus will feel more normal.

On Saturday, more than 600 UW-Green Bay graduates snaked their way through campus with up to two vehicles full of family and friends during a drive-thru graduation ceremony. Some families sprung for limos, others adorned cars and trucks with paint and balloons for a slow crawl toward the university performing arts center.

There, Chancellor Michael Alexander stood waiting in full regalia as students climbed out of their vehicles to get their diplomas and pose for a graduation photo. 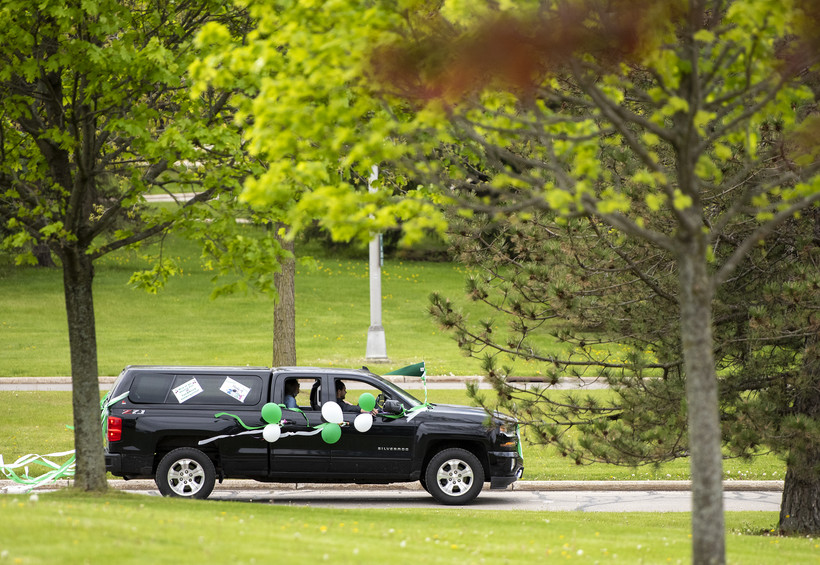 In addition to her cap and gown, education major Frances Nazario wore a stole around her neck adorned with the Puerto Rican flag while nearing the stage in her car. She told WPR COVID-19 made her final year of studies more challenging, but she's resilient.

Nazario said the support of her husband and two young children made her quest to become a bilingual educator possible.

"I do it for these two little guys ... they're my motivation," Nazario said pointing to her boys in the back seat. "My husband held down three jobs so I can go to school full time and focus. And it's just been a blessing and a wonderful ride. It really has."

Psychology and human development major Jenna Vaaler sat shotgun in a black car contrasted with white balloons and streamers as the procession inched through campus. She said graduating felt "really good" after nearly a full year of online classes. 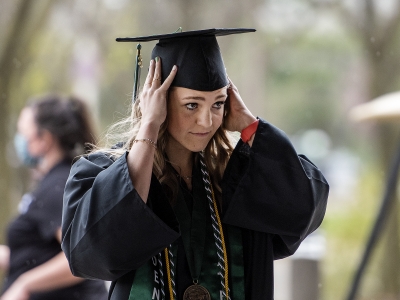 Graduate Jenna Vaaler adjusts her cap before receiving her diploma Saturday, May 15, 2021, during a drive-thru ceremony at UW-Green Bay. Angela Major/WPR

"I felt like I was well-prepared and the professors did a good job trying to help us get there," said Vaaler. "Would I have preferred in-person, of course. But, you know, given the circumstances, you do what you can."

The past year has been a grind for students. UW-Milwaukee criminal justice major Amillia Heredia graduated with her bachelor's degree on Sunday. She's also been taking graduate courses as part of an integrated program and hopes to get her master’s degree in December.

Heredia said taking online classes wasn't hard for her because she went to a virtual high school before enrolling at the university. But the sudden shift to online classes in spring of 2020 felt messier than prior UW-Milwaukee virtual classes she's taken. Combined with working 32 hours per week for an online global security firm, she said she realized she wasn't getting the small social interactions of going to the coffee shop or mingling with students between classes and began to feel claustrophobic.

"It's the me expecting to get up every day and meet these people and be on campus," said Heredia. "The lack of that is just a bit, it's not as motivating anymore."

As an African American, Heredia said the added stress brought on by the 2020 murder of George Floyd left her thinking about taking a semester off and disrupting her four-year plan.

"Being the perfectionist I am, I was like, I need to push through as a first generation student with limited finances," said Heredia. "There is nothing to fall back on. This is my road, I just have to deal with these bumps that are being handed to me." 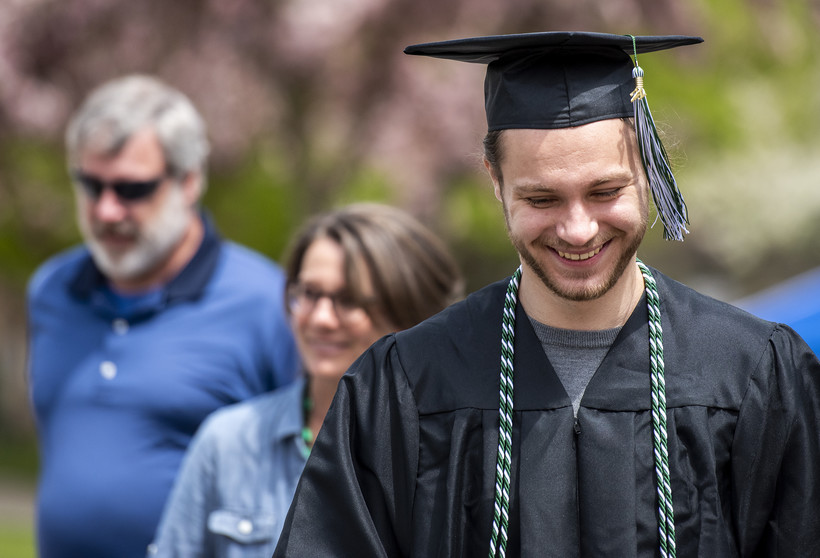 UW-Green Bay graduate Keenan Leonard walks back to a vehicle after taking photos with his family Saturday, May 15, 2021, in Green Bay, Wis. Angela Major/WPR

UW-Stevens Point junior Nicole Newberger said it was hard to concentrate while watching one online lecture after another. She said campus social restrictions weighed on her too, but she considers herself lucky.

"My social life was just in my house, just those 10 people that I live with, which I'm grateful to be able to live with that many girls," said Newberger. "So, I was able to not feel alone because I had all of them."

For students that didn't have the luxury of living with multiple roommates, Newberger and other UW-Stevens Point students majoring in health promotion and wellness made care packages that included yoga mats, puzzles and games.

"So, that way they don't feel like they're just stuck and so isolated, that they have something to do and that people are reaching out and wanting to connect with them because I know it can feel so, just so alone," said Newberger.

Summers said he's proud of how the university and its employees responded to the pandemic, though he said the social component of college was the most difficult to replicate. He said there was a decline in student retention from last fall to this spring and the university is working hard to reach out and encourage those students to come back. 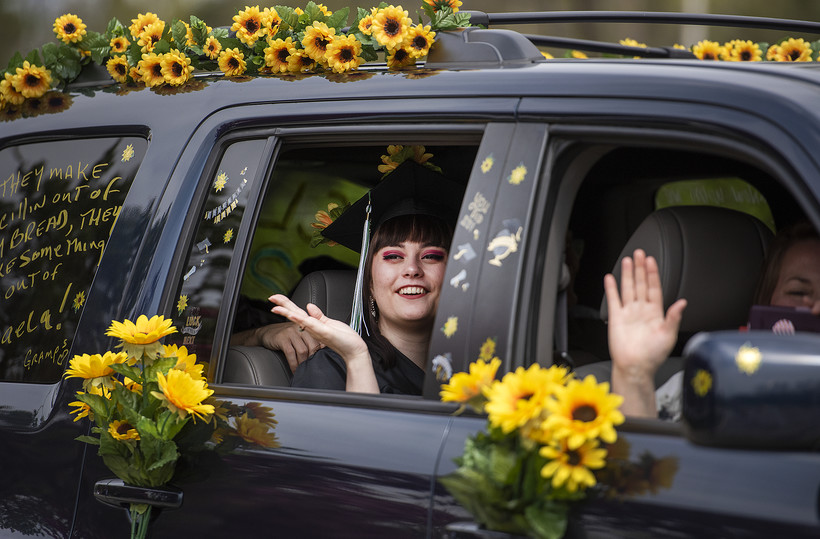 A UW-Green Bay graduate waves from inside a decorated vehicle Saturday, May 15, 2021, during a drive-thru graduation ceremony. Angela Major/WPR

When UW-La Crosse, like all other UW campuses, announced it would extend spring break last year to give professors time to rework classes into online courses, sophomore Jenna Dinkel was excited.

"I remember me and my roommate to start were like, 'Oh, we're going to get a two-week spring break,'" said Dinkel. "'This is going to be great.' And we were just praying for this spring break, which sounds horrible, looking back on it. But, we were just naive."

Dinkel started the fall semester in a UW-La Crosse dormitory but as the number of COVID-19 cases on campus began to quickly rise in the first week of classes she didn't feel safe. That started a series of moves, first back home, then to an off-campus apartment. 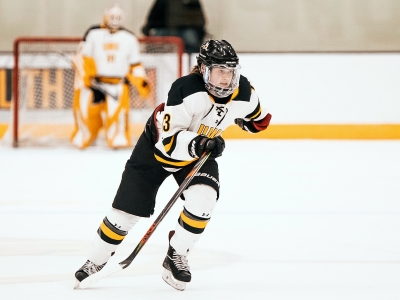 The outbreak ultimately pushed UW-La Crosse to cancel all in-person classes for two weeks in September. Students living in dormitories were told to shelter in place. UW-Madison and UW-River falls took similar steps within their first week of classes.

UW-Superior criminal justice and political science major Amber Heidenreich graduated last weekend. She described the past year as "horrible," partly because she felt trapped in her room while working and taking classes online.

When she returned to campus in September, Heidenreich, who also played for the university's women's hockey team, said she contracted COVID-19 and got sicker than she's ever been. It was bad enough she delayed starting her classes for a week and the effects from the virus stayed with her for months.

"The thing that I think really sucked was when hockey practice started, I could feel that I didn't have the lung capacity I normally did," said Heidenreich. "And so, when I would do the workouts I genuinely felt like I would pass out. And so I'd have to take breaks."

UW-Eau Claire graduate student Theresa "Marie" Corpuz Fredrickson saw the other side of the pandemic as she pursued a doctorate of nursing practice at UW-Eau Claire. In between classes, she worked as a nurse for a rural nursing home and hospital that lost "quite a few residents and patients." She said she prayed she wouldn't get sick so that she could continue helping her patients.

Fredrickson said it was really different taking online classes, but she said the school was supportive and even gave her a loaner laptop after her personal computer struggled with virtual courses. During winter break Fredrickson said she spent as much time as possible with patients, working 120 hours in a pay period. She said it was heartbreaking to see patients succumb to COVID-19 when loved ones couldn't be in the room.

"I utilized the telephone just to call their families and, you know, for them to say goodbye," said Fredrickson. "I held their hands. They were not alone at their deathbed. So, I know I made a difference."

Fredrickson graduates with her doctorate in nursing on Saturday, bookending a long and unprecedented year at UW-Eau Claire.

But like other campuses across the state, there are signs of a more normal college experience for students next year. UW System interim President Tommy Thompson has said at a minimum, 75 percent of classes will be held in-person this fall. And an incentive to encourage students to get vaccinated against COVID-19 has been underway since April.

Whether college will ever look or feel the way it did before the pandemic hit Wisconsin remains to be seen. But students say they're optimistic things will be better than last year.