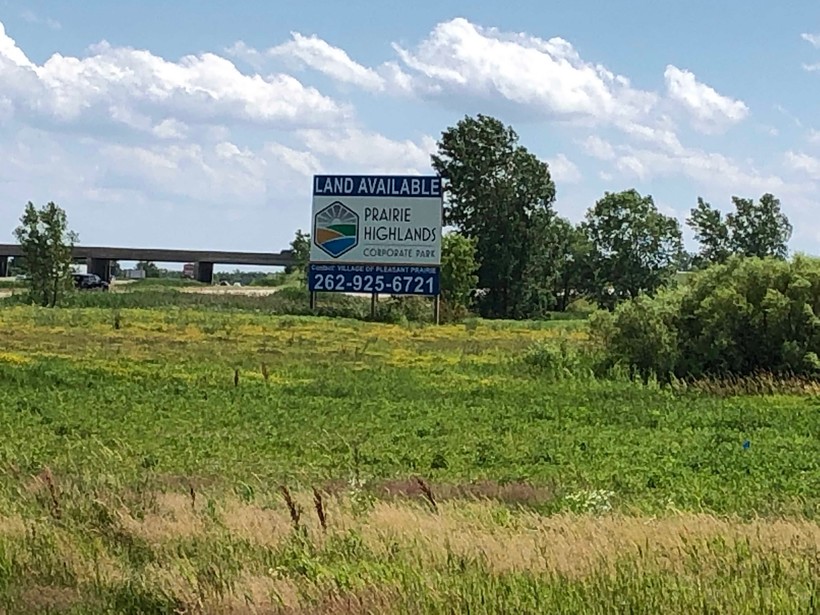 Part of the planned Prairie Highlands Corporate Park along Interstate 94 that will include a manufacturing facility for Nexus Pharmaceuticals Inc. Corrinne Hess/WPR

Illinois-based Nexus Pharmaceuticals Inc. is planning a $250-million project in Pleasant Prairie that will bring 77 jobs to Kenosha County in its first phase.

The multi-phase project is expected to be completed within 10 years. In the project's first phase, Nexus will invest $85 million to build and equip a 100,000-square-foot, three-story sterile drug manufacturing facility, Gov. Tony Evers announced on Wednesday afternoon.

After the facility and equipment are approved by regulatory agencies, commercial production is expected to begin in 2022, Evers said.

Jobs will include engineering, quality control and supply chain management with average annual salaries of $70,000.

Nexus currently has 58 employees and outsources its manufacturing. The Pleasant Prairie facility is a huge expansion for Nexus, Darsot said.

"We are proud to call Wisconsin the new home for our company's first manufacturing facility," Darsot said in a written statement. "This investment is needed to drive the continued growth of the U.S. pharmaceutical manufacturing industry. There is increasing patient demand for high-quality and accessible generic injections."

Nexus is a woman-owned, privately-held pharmaceutical company that produces specialty and generic injectable drugs used by hospitals across the United States. The company is based in Lincolnshire, Illinois.

The Pleasant Prairie manufacturing facility will support the production and supply of drugs in an array of therapeutic areas, including anesthesia, oncology, cardiovascular and neurology. Nexus’ proprietary products are currently contract-manufactured by third-party providers located primarily in Europe and the U.S.

Construction on phase one of the project is expected to begin in August with completion in 2021, Evers said.

"This is one of the most significant pharmaceutical investments in Wisconsin in years," Evers said in a written statement. "Southeast Wisconsin is increasingly becoming a destination of choice for high-value manufacturing jobs that require a skilled, educated workforce."

Evers announced the project at Prairie Highlands Corporate Park along Interstate 94, where Nexus has purchased a 16-acre parcel of land from the village of Pleasant Prairie.

The Wisconsin Economic Development Corp. (WEDC) has authorized up to $1.5 million in state income tax credits over the next four years. The actual amount of tax credits Nexus will receive is contingent upon the number of jobs created and the amount of capital investment during that period.

WEDC predicts that in addition to the 77 jobs at Nexus' Pleasant Prairie location, the project could indirectly generate 134 additional jobs in the region. Those 211 total new jobs are expected to generate up to $512,000 annually in state income tax revenue, according to the state.

"We are pleased that Nexus is bringing high-paying, high-skill jobs to the state," Hogan said in a written statement.

Nexus will join German candy producer Haribo and health care provider Advocate Aurora as the initial occupants of the park, which is being developed on land the village purchased from Abbott Laboratories in 2017.

Darsot said she chose Kenosha County because of the size of the land that was available, and its proximity to the corporate office in Lincolnshire.

Nexus is the most recent company to invest in Kenosha County.

For decades, the interstate corridor between the Illinois state line and Milwaukee County had been a sleepy stretch, but over the last five years, real estate activity boomed, particularly in Kenosha County.

In March 2017, Haribo of America Inc., the Rosemont, Illinois-based subsidiary of the German gummy bear maker, announced it would build its first U.S. manufacturing facility in Pleasant Prairie. The company has said the plant will support 400 jobs.