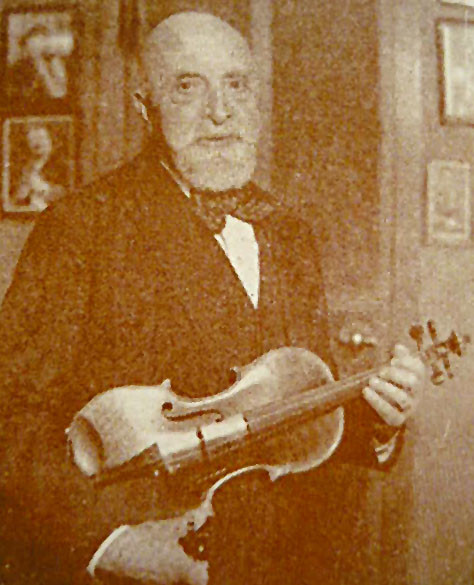 As if performing for the great Henri Veiuxtemps wasn’t bad enough, violinist Leopold Auer had to put up with one of the worst accompanists imaginable—the wife of Vieuxtemps.

It happened about 1859, when Auer was a student.  Auer and his father went to visit Vieuxtemps and the violinist received them cordially, but his wife—who was also his accompanist-- was icy.  After some small talk about his studies, Auer was allowed to take out his violin—not a very good one—and play.   Madame Vieuxtemps sat down at the piano, looking bored.  Auer had a nervous disposition as it was and he was trembling as he began to play Vieuxtemps’ “Fantasie Caprice.”

Years later when he told the story, Auer couldn’t remember whether he had played well or not so well, but he remembered pouring his whole soul into each note even though his technique wasn’t the best.  Vieuxtemps encouraged him with a friendly smile.

Suddenly, in the middle of the performance, Madame Vieuxtemps jumped up from the piano stool and began prowling around the room, bending to the floor, looking underneath the furniture, under a bureau, and under the piano as if she had lost something.

Auer was at a complete loss. He stood open-mouthed, feeling as if he had been knocked from a bright pinnacle by a fiery explosion from a pit.  Even Vieuxtemps seemed amazed as he watched his wife scouring the room.   Finally he asked her what she was doing.

“A cat or two must be hiding in the room,” she said, “meowing in every key.”

When Auer realized that she was referring to his over-sentimental glissando in a cantabile phrase of the Fantasy Caprice,” he fainted.  His father caught him before he fell to the floor.  Vieuxtemps turned the entire debacle into a joke, though, patted Auer on the cheek and told him everything would be all right.  Leopold Auer went on to become one of the world’s great violinists, but he would always remember the setback he suffered at the age of fourteen.