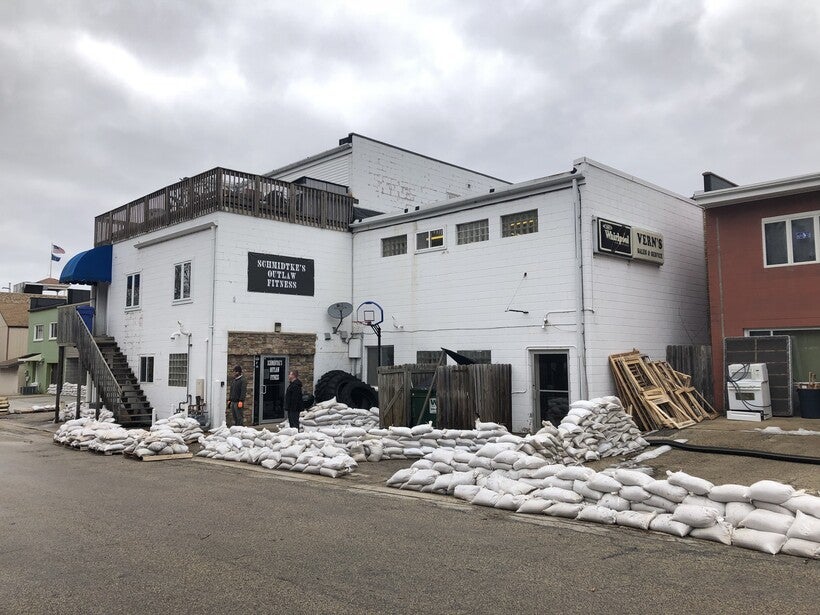 Sandbags surround a building in downtown Lodi, Wisconsin on Friday, March 15, 2019, the day after water from Spring Creek flooded roads and basements. Water used to stretch from Spring Creek to the backs of the buildings on Main Street. The pavement was flooded and people had 4 feet of water in their business basements. Phoebe Petrovic/WPR

She loves the people.

She loves that people look out for one another.

She loves that people help one another.

So when Spring Creek, which threads through downtown Lodi, began to flood earlier this week, she knew what she had to do: help.

"I just love my town," she said. "I love the people in this town. You know you got to help when you can. If you don't have the opportunity to do something like this, you never really know how good it makes you feel to go out and do something that makes your body hurt and you only want to stay in bed, but the next day you know you're going to come back."

Lodi, in Columbia County, is one of the towns that has experienced severe flooding this week.

On Thursday morning, Spring Creek reached 8.6 feet, breaking the historic crest level of 8.4 feet set twice, once in 2008 and once in 2014, according to the Wisconsin State Journal. Flood stage is 6.5 feet, according to the National Weather Service in Sullivan.

Authorities have declared a state of emergency for the south-central Wisconsin town, where flooding prompted evacuations and has affected homes and businesses along Water and Main streets, with as much as 4 feet of water in some basements, according to the National Weather Service in Sullivan.

Friday afternoon, Gov. Tony Evers declared a statewide State of Emergency in Wisconsin due to flooding caused by rapid snowmelt and rain.

As of 5 a.m. Friday, Spring Creek dropped to 8.4 feet, according to the National Weather Service in Sullivan, and continues to go down, falling back into its banks and leaving water-covered roads bare and sandbags protecting buildings untouched.

Spring floods aren't unusual in Wisconsin, but because the ground is frozen and already saturated, it can't absorb melting snow and ice, and the rain, making the floods more severe.

"It was just something like I've never seen before," Benson said. "You see it on TV. And you say, 'Oh that's horrible. Those poor people.' And then you go about your business OK. When it happens to you, boy is it another whole story in itself."

Benson said the whole community has come together, with hundreds of volunteers filling and distributing sandbags. Lodi had 7,000 sandbags distributed Thursday and bagged another 10,000 Thursday night. Volunteers worked until about 2 a.m. Friday.

Benson herself has put in 12-hour days sandbagging.

Her family straddles the creek: one son owns a gym on the right side, another owns a home on the left.

On Thursday, Benson’s family had to deal with rapid floodwaters and gas leaks from nearby businesses.

Lodi Mayor Jim Ness has lived in the town for 71 years and said he's never seen the creek so full.

"You had to see it to believe it, but we didn't really want to see a lot of spectators either because we were trying to get around," Ness said. "But everybody was good. We got through it. Don't want to see it again."

"Even if we'd have expected it, I don't know what we could have done. It came so fast and just bang, it was here," Ness said of the flooding. 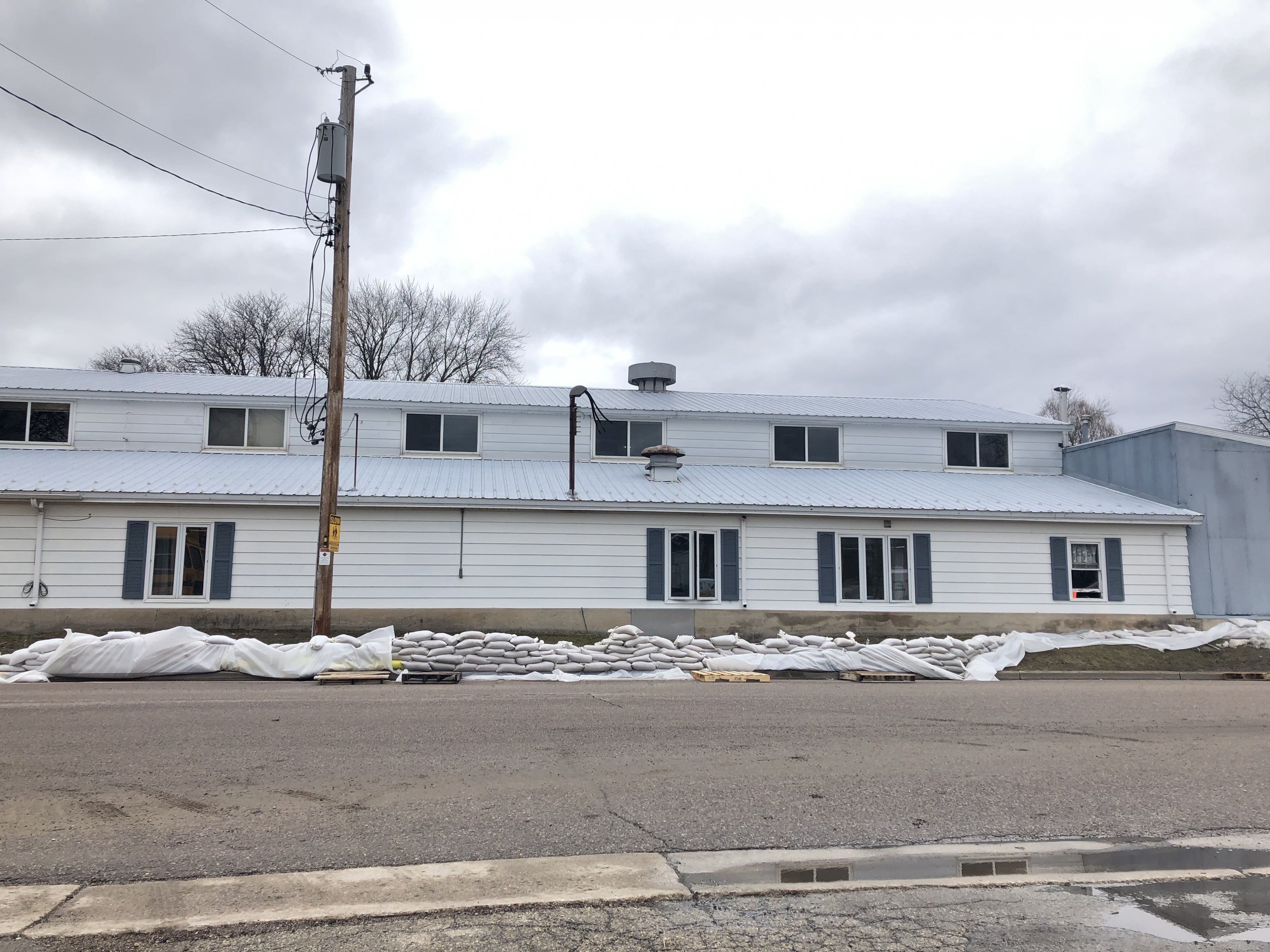 Sandbags line a roadway in Lodi, Wisconsin on Friday, March 15, 2019, after flood water rushed into the town's roads and some basements of businesses and homes. Phoebe Petrovic/WPR 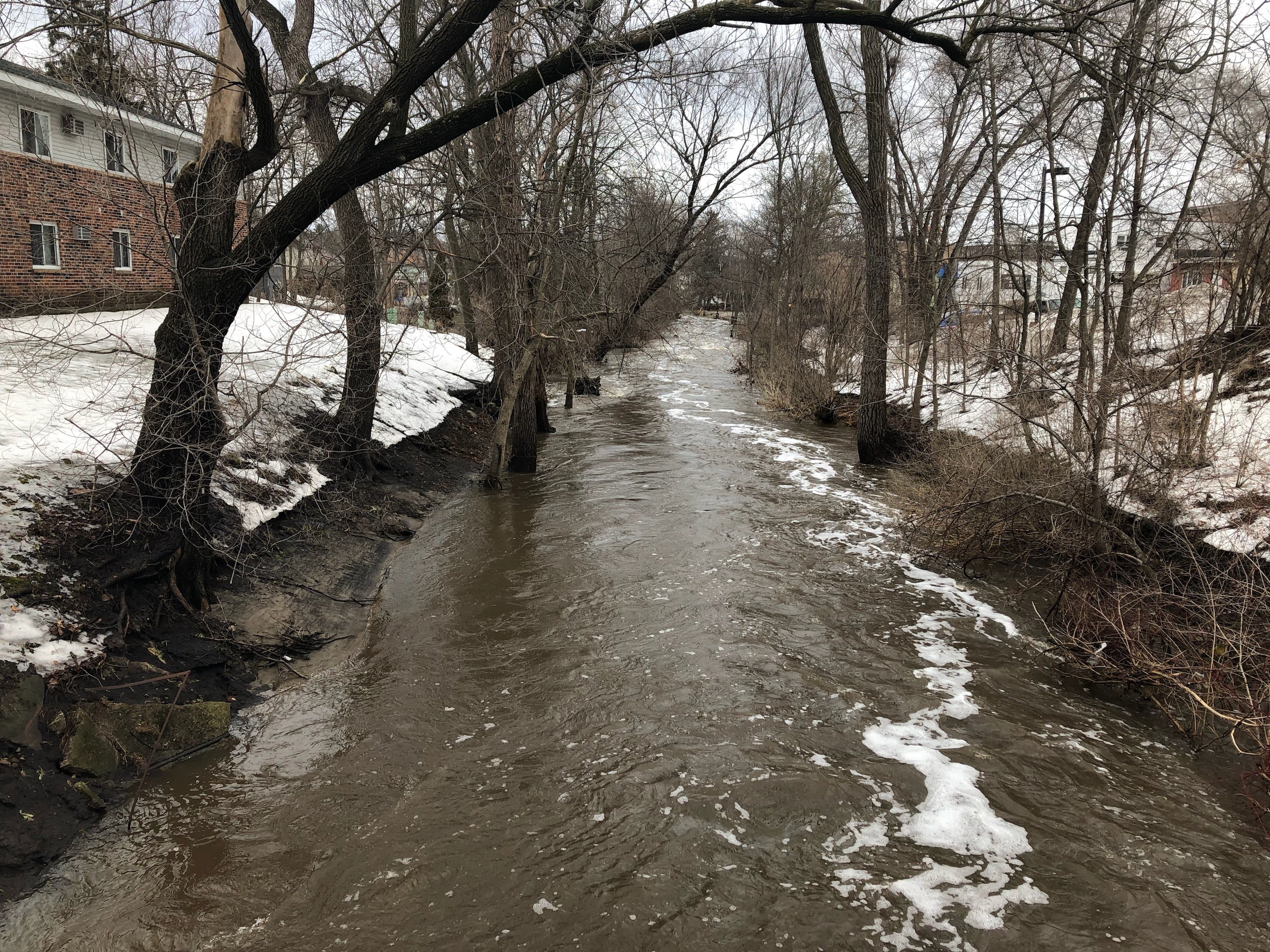 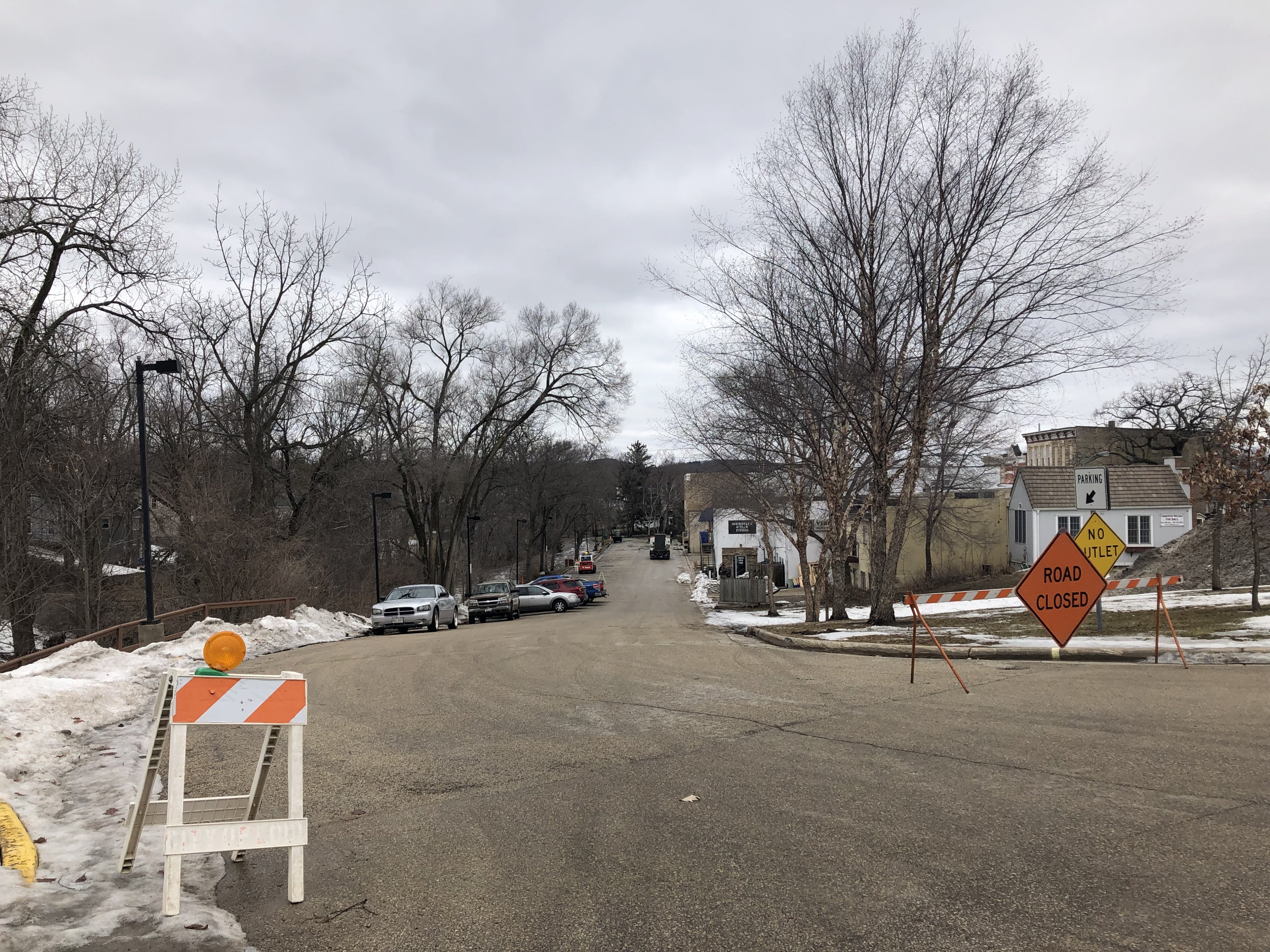 In this photo taken Friday, March 15, 2019, the roadway is clear after water from Spring Creek covered the streets and stretched to the buildings on the right on Main Street in downtown Lodi, Wisconsin. Phoebe Petrovic/WPR

On Thursday afternoon, the Lodi Fire Department responded to a gas leak that led to the evacuation of buildings along Main Street for about two hours, said Ness.

The Pardeeville Fire Department was in Lodi on Friday morning to help relieve members of the Lodi Fire Department and ensure there were no safety risks once the gas and electric were turned back on.

As of 12:30 p.m. Friday, some businesses and homes still were without electricity, gas or both.

The first gas leak Thursday happened at Nancy's Floral and Gifts, located on Main Street. The pilot light went out and gas kept flowing into the company's basement, where 4 feet of water pooled, said Nancy and Bob Peterson, who own the shop.

Ness said Lodi is in recovery mode as people assess damage and decide how to move on.

"We're in the recovery. Everybody's putting pieces back together," Ness said. "We're getting things back together a little bit at a time. Some of the homeowners along Water Street, along North Main here are pumping their basements or getting their furnaces back up. Everybody's working at it. There's a lot going on."

Ness said the west side of Lodi, which is on a hill, wasn't impacted.

"You wouldn't even know this was going on until you drove down on Main Street," he said.

Benson, who was tired and sore Friday morning, said she planned on spending the rest of the day helping her community, determined to aid the cleanup in any way she can.

"I just love my town. I love the people in this town. You know you got to help when you can," Benson said.

Near the southern border of Columbia County, where Lodi is located, flooded fields flanked both sides of Interstate 39/90 Friday morning.

The water is gushing here in #Lodi, which has seen record flooding in the past two days. Residents & Mayor say, thankfully, Spring Creek is back in its banks. @WPR pic.twitter.com/kE2t5MnTl7

In the eastern Wisconsin city of Fond du Lac, hundreds of people were evacuated from downtown to higher ground after flooding on the Fond du Lac River.

Fire Chief Peter O'Leary said they had to use heavy equipment to break up ice jams on the river.

"When we did that, it helped a lot, but we still have a lot of water that is taking neighborhoods away. Literally, that's what it's done," O'Leary said.

ICYMI: The flooding in Fond Du Lac is some of the worst residents have seen since 2008! pic.twitter.com/5t03yOSPMi

In Green Bay, river and urban flooding are expected to continue, and flash flood warnings were issued Thursday night.

The Green Bay and Fond du Lac school districts canceled classes for Friday because of the flooding.

The heavy flooding prompted dozens of road closures and a number of evacuations across the state — and more may be on its way.

The Pecatonica River in Darlington crested Thursday night into Friday morning at just under 18 feet, according to WISC-TV, and is receding. Flood stage is 16 feet.

Water levels rose to 17.57 feet, less than the 18 feet predicted Thursday, when the Darlington Police Department warned residents the city could experience the worst flooding since 1993.

In a Facebook post, the police department said, "If the river keeps rising like it is, which it's safe to say it will, this will end up being the worst flood we've had since 1993. The major flood stage in Darlington is 16'. We have not had a major flood since 1993. We expect the river to rise above the 16' mark later this morning. To put things into perspective, though, the 1993 flood was 18.22 feet. We don't think things will get that bad."

The village of De Forest issued a mandatory curfew Thursday night and "activated the Emergency Operations Center and residents are under voluntary evacuation in response to flood stage levels of the Yahara River." The village is offering sandbags to any resident in need.

Editor's note: This story will be updated. Hannah Haynes, Brady Carlson, Phoebe Petrovic and Andrea Anderson contributed to this report.