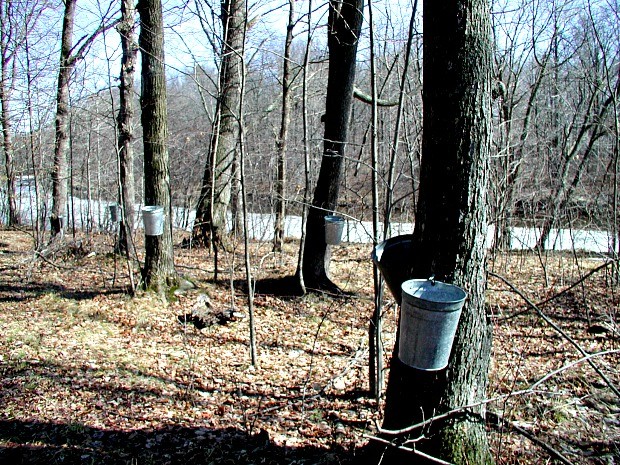 The 2015-16 El Niño is shortening the maple sap harvest and make collectors and syrup producers scramble. Here, sap is being collected near Cadott, Wis.

Early warm weather and the influence of El Niño is causing maple syrup to start running, requiring maple sap collectors and syrup producers to scramble to capture the harvest. The ideal weather conditions for sap collection are daytime temperatures around 40 degrees Fahrenheit and nighttime temps below freezing. Sustained warm temperatures provide an environment for a rapid, massive release of sap by trees over a very short period of time.

The formation of maple sap is determined by tree physiology. In the later summer and fall, maple trees virtually stop growing and begin storing excess starches throughout the sapwood, especially in their xylem ray cells. This excess starch remains in storage as long as the wood remains colder than about 40 degrees F. But whenever wood temperatures reach around 40 degrees F, enzymes in the ray cells transform the starches to sugars, largely in the form of sucrose. This sugar then passes into the tree's sap. Temperature increases create pressure inside trees, causing sap to flow. When a hole is bored into a tree, wood fibers that transmit fluids are severed and sap drips out of the tree.

So if warm weather causes sap to flow, why would there be a big rush and short collection season? The quick answer is sugar content is reduced in the sap flow. As the wood temperature increases to about 45 degrees Fahrenheit, the enzymes stop functioning and sugar is no longer produced. Sap flow may continue but with reduced sugar content, resulting in poorer quality syrup. If buds on trees begin to swell and break due to ongoing warm weather, the sap flow will stop and the collection season officially ends, ceasing production.

Sugar and red maple trees growing along roadsides, in lawns, or in other open settings, where their crowns have grown large without competition from other trees, generally produce larger volumes and sweeter sap than forest-grown trees. Open-grown trees are capable of producing one-half gallon of syrup in one season (requiring 15 to 20 gallons of sap for production), whereas trees growing in a more crowded forest setting generally produce about 1 quart of syrup (around 10 gallons of sap). In addition to greater sap volume and sweetness, open-grown trees also generally offer greater accessibility for collection.

If sap is collected in buckets, the best place to tap the trunk is 2 to 3 feet above ground to allow for easy collection. A taphole should be drilled 2 to 2 1/2 inches into the tree at a slight upward angle to facilitate flow of sap. If the tree has been tapped in previous years, the new taphole should be at least 6 inches laterally and 24 inches vertically from the old hole to ensure access to fresh, productive sapwood. For trees with more than one tap, the tapholes should be distributed around the circumference of the tree.

Most maple sap is about 2 percent sucrose (sugar). The amount of sap required to produce 1 gallon of finished syrup can vary from 20 to 60 gallons or more depending primarily on the sap's sugar content. A large amount of water must be evaporated from the sap to produce a finished syrup of 66 to 67 percent sugar. The Cornell Sugar Maple Research & Extension Program finds that sap becomes syrup at 219.25 degrees F, or 7.25 degrees higher than water's boiling point at the same altitude. Concentrations of syrup below 66 percent sugar content can sour over time. If sap is boiled above 67 percent density, sugar crystals can form in the bottom of storage containers. Finished syrup will often create a wide sheet or drip on the edge of a spoon when dipped in and quickly withdrawn above the boiling liquid.

The early sap run in 2016 is making fresh syrup more readily available at an earlier date than most years. Prices may remain steady with an ample flush of syrup over the spring. However, prices could rise later if demand stays steady and the sap season is shortened by ongoing warm conditions.

Maple syrup is one of the oldest natural foods in Wisconsin and has been passed from generation to generation and culture to culture. Interest in sap collection and processing is increasing as more landowners and small farms look for ways to provide a locally grown, natural product. According to USDA National Agriculture Statistics Service Census figures, for 2002 to 2012, there was an increase of 88 farms in Wisconsin reporting tapped trees. Hopefully new sap collectors and syrup makers will not get discouraged from an early and hectic 2016 collection season.