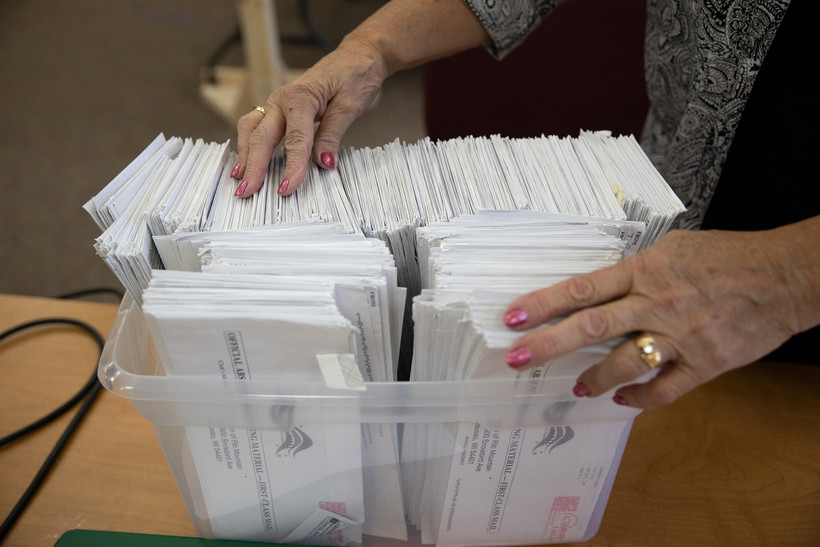 Absentee voting is already underway in Wisconsin, and with the COVID-19 pandemic continuing, we're likely to see a record number of votes by mail this year.

But there are challenges. In the April election and presidential primary, election officials disqualified about 23,000 mail-in ballots.

Those ballots made up a relatively small percentage of the more than 1 million votes cast by mail. But 23,000 is almost exactly the same number of votes by which President Donald Trump won Wisconsin in the 2016 election.

How can a voter be sure to fill out their absentee ballot so that it will be accepted and counted? Here are some tips from election officials and reporters who have been covering the issue of absentee voting.

Give Yourself Time: Act Early

If there’s one message election officials are stressing in the final month before the election, it’s this: "Time is really, really important if you choose to vote absentee by mail."

Wolfe said, under Wisconsin law, voters have until the Thursday before the election to request a ballot by mail, "but don’t wait that long. That’s probably not going to set you up for success in order to get that ballot in time and to get it back."

Why? Because there could be a lot in flux in the final weeks of the campaign.

Election staff will be sending out and receiving massive numbers of absentee ballots. And there have been numerous reports about the concerns over the U.S. Postal Service returning ballots to clerks in time to be counted. Wolfe said the Postal Service has advised it could take up to a week to receive a ballot after it’s been requested, and up to a week to send that ballot by mail back to the clerk’s office.

In other words, don’t wait. Make sure you’re registered to vote, and then request a ballot through MyVote.WI.gov or by contacting your election clerk’s office.

Remember those 23,000 disqualified ballots from April? An analysis by Wisconsin Watch and APM Reports found the most common reason those ballots weren’t counted was "lack of certification."

Here are the essential elements again:

Many clerks are highlighting those essential elements on the ballot envelopes, or sending out extra instruction sheets. Double-check those instructions against your ballot envelope to make sure everything is in order. Have questions? Contact the clerk’s office.

Get The Ballot Back In Time

Hall said the second most common reason ballots were rejected in the spring election was "that they came in after the deadline to arrive. That is a real concern."

State law requires that absentee ballots be returned to clerks — returned, not just mailed — by 8:00 p.m. on Election Day, which is when polls close in Wisconsin. In April, a judge extended the deadline to include ballots that were mailed by that deadline but were received up to seven days later. That may happen again this time, but courts may also rule against an extension.

If the guideline is to send a completed ballot at least a week before the state deadline, that means you’d want to put your ballot in the mail by Tuesday, Oct. 27 at the latest.

But Hall notes there are other ways to send your ballot back if you’re concerned about the mail. "You can certainly return your ballot directly to the clerk's office. That's your most secure method. Of course, that would involve going into an office."

For those who don’t want to use the mail and aren’t comfortable going in person to the clerk’s office, many communities are setting up drop boxes for ballots.

"A lot of times they're located either just outside City Hall or maybe within the lobby of City Hall," Hall said. "That's something to think about as well: if you're concerned about crowds, maybe you just go to the dropbox. Some of them are available 24/7."

Wisconsin voters can track the status of their ballots by contacting their clerk's office, or the "Track My Ballot" portal on myvote.wi.gov.

"It won't necessarily tell you whether your ballot was accepted; however, it'll at least tell you that the ballot arrived," Hall said. "But you can contact your clerk's office and say, look, I just want to 100 percent make sure that my ballot will be counted."

What If There’s An Issue With My Ballot?

If your ballot is received in time to be counted, but there’s a problem — say, your witness didn’t include their address after all — don’t despair.

"You can go in and cure the ballot; that's something you would work out with your clerk's office," Hall said.

The state even encourages clerks to reach out to voters to address these issues, but they’re not required to do so. And Hall said "what we found in the April election, where we had over 1.2 million ballots that were requested, a lot of clerks simply became swamped and were unable to reach back out to voters whose ballots they could see just on the outside were not going to be counted."

Once again, here’s the link to find and contact your local clerk if you need to fix an issue with your ballot.

My ballot Is In! Now What?

Ballots aren’t opened until Election Day, so until then, clerks track each individual ballot and its location to keep them secure.

On Election Day, Wolfe said "your ballot is sent down to your polling place, just as if you were there on Election Day. You’re assigned a voter number, your name and address are announced."

If the required elements are on the envelope, Wolfe said, the election workers "take your ballot out of the envelope and put it in an anonymized stack of ballots before it’s tabulated. Now your ballot is no longer associated with that certificate envelope. There’s no way to trace back who you voted for."

One other thing you can do while you’re waiting for Election Day, as NPR’s "Life Kit" noted, is to help someone else through the process. Share what you’ve learned, answer questions, maybe even serve as a witness.