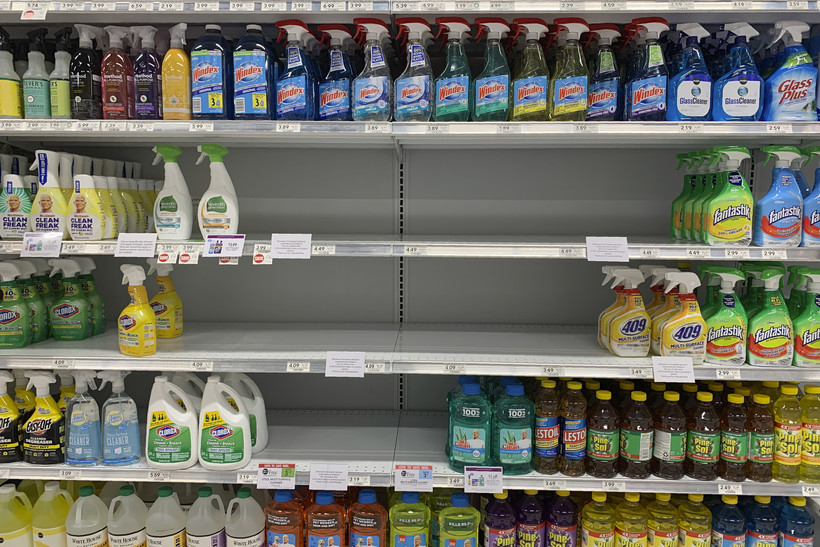 Empty shelves of cleaning supplies are seen at a Publix Supermarket amid concern over the COVID-19 virus on Monday, March 9, 2020, in Pembroke Pines, Fla. Brynn Anderson/AP Photo

How Often Should You Use Antimicrobial Products?

For years, we’ve heard concerns about a looming global health crisis that threatens health care systems and public health: the ominous "superbugs" — bacteria that have mutated and outsmarted the antibiotics we’ve developed and relied on to treat them.

Now, as the coronavirus pandemic has captured the world’s attention, scientists are worried the outbreak could further fuel antibiotic resistance, and distract attention from the crisis that already claims 700,000 lives a year globally.

In the early weeks of the coronavirus pandemic, doctors in some hard-hit areas reported giving up to 80 percent of patients antimicrobial drugs out of fear they would develop a secondary bacterial infection from the virus.

University of Wisconsin-Madison Professor of Microbiology and Immunology Lindsay Kalan said that level of antimicrobial — a broad term for something that can kill bacteria and fungi — use might not have been required, but was part of an early learning curve of treating a new disease.

"This is definitely a concern," she said. "But ... it's a learning process for us because you also don't want to deny someone an antibiotic if they potentially have a bacterial infection."

While antibiotic resistance is usually connected to misuse of antibiotic drugs — where it is a greater problem — misuse or overuse of other antimicrobial products, like household cleaning supplies and hand sanitizer, that have seen a dramatic rise in use since the pandemic began could also contribute to antibiotic resistance.

Antibacterial soaps, in particular, are a problem, Kalan said.

"I really don't know that there's any situation that you would need to use that in place of just regular soap and water," she said. "Antibacterial soaps definitely increases the risk of developing antibiotic resistance."

By washing your hands with antibacterial soap, the chemicals in it get washed down the drain, into sewers and out into the environment where they’re exposed to a variety of types of bacteria and can develop resistance, Kalan said.

"Bacteria are very, very good at sharing their genes with each other," she said. "Then those genes that offer resistance get shared and transferred among a lot of different species of bacteria in the environment."

This exposure can also make the bacteria more resistant to the antibiotics people take when they are sick.

"If you're thinking about your home or your workplace, it's still important to wipe down and disinfect any surfaces that multiple people are touching on a regular basis," she said. "But we don't need to go overboard and ... sanitize every surface in our home, every single day."

Still, the products need to be used correctly, said Troy Skwor, assistant professor in the biomedical sciences department at UW-Milwaukee.

"A lot of people aren't using them properly," he said. "And so what happens is that it's efficacy, or its ability to minimize the growth and kill off bacteria decreases."

"It's possible you're not actually getting the dosage it actually needs and therefore, you may be increasing the resistance populations," he continued. "Which now when they start to grow, they're going to be less affected by when you use disinfectants."

Skwor said it’s important to think about when disinfectants and hand sanitizers are needed and when they’re not.

"Use them when it's important, when the risk is the most," he said. "When you're out in public, when you're interacting with people and you're not sure where they came from. But when you're back at home and you're not leaving, there's no reason to go wash your hands every 30 minutes."