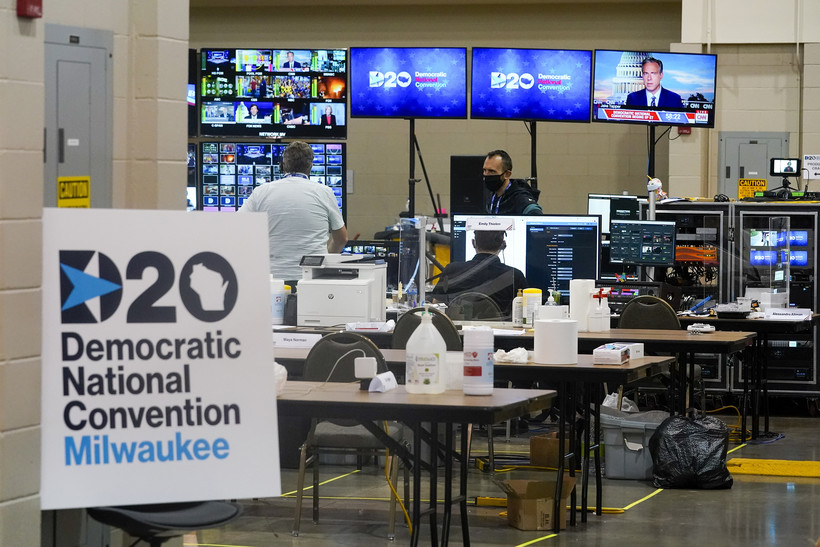 The control room for the Democratic National Convention is seen before the start of the convention Monday, Aug. 17, 2020, in Milwaukee. Morry Gash/AP Photo

How Much Wisconsin Is There In The Officially Milwaukee-Based DNC?

Mostly Virtual Convention Has Wisconsin Speakers, But A Different Feel Than A Live Event Would Have Had
By Brady Carlson
Share:

Wisconsin Democrats kicked off the 2020 National Convention by welcoming the party to Milwaukee, at least virtually.

Nearly all convention business is, of course, happening remotely because of COVID-19. But party leaders have said that the DNC will still showcase Wisconsin as a whole and Milwaukee in particular as the 2020 general election begins.

WPR's Shawn Johnson has been watching the convention to see how much Wisconsin will be in this officially Wisconsin-based convention.

He spoke with All Things Considered host Brady Carlson.

The following has been edited for brevity and clarity.

Brady Carlson: You've been to political conventions in previous election years. Do host cities typically work to showcase themselves so that someone who's watching from outside might learn more about their city or its people?

Shawn Johnson: For somebody who's watching the convention on TV, that is their experience. I was trying to think about whether they would have looked at the conventions in Philadelphia, or Cleveland, from four years ago, and known that they were uniquely Philadelphia or uniquely Cleveland. And I'm not sure (they would have). I think the biggest thing a home city usually benefits from with a convention is the swarms of people who come in, the thousands of people who come in and experience the city for at least a few days. That is how a city puts its stamp on a convention, the people who came there for the convention get to experience it. That's not happening this time, and that's probably the biggest dividing line between how this convention differs from conventions past.

BC: How much of a Wisconsin stamp are you seeing on what's going out across the country through this mostly remote, time-shortened video format?

SJ: At least on the first night (it) did not have a Wisconsin feel to it, to my eye. U.S Rep. Gwen Moore was the first politician who spoke; she kicked it off and said I wish you were here with me in Milwaukee, but we will gather virtually and bring the nation together. She did put a little bit of a Milwaukee stamp on it, but she spoke for 82 seconds — a very brief sliver of time in the televised convention. You had people from Wisconsin in some of the segments where real people were talking about what it's been like to struggle through COVID-19, or 2020 in general. But Gwen Moore was the Wisconsin stamp on the first night of the convention, and it was very brief.

Screen grabs take from the DNC website on Aug. 4 and Aug. 18 show Wisconsin is no longer featured in the convention logo.

BC: And judging by the speaking schedule, is that the extent of the Wisconsin imprint on the DNC?

BC: There are a number of national Republican figures on the Wisconsin schedule this week. Not at the DNC, but in-person. Who is taking part in what's being called a Republican "counter-program" to the convention?

SJ: The Trump campaign has been pretty aggressive in trying to make a point that is not too subtle, that they're here and Joe Biden is not. President Trump was physically in Oshkosh on Monday, speaking at a campaign rally. Vice President Mike Pence is going to be in Wisconsin on Wednesday. Eric Trump was in Wisconsin Tuesday, so they're trying to use this situation where Wisconsin was supposed to have this big convention which is now virtual, to say, 'Pay attention to us, Wisconsin, key swing state.' The Democratic response to that is, we'd love to be (in the state), but it just wasn't the right thing to do to hold an in-person convention in Milwaukee during the COVID-19 pandemic.