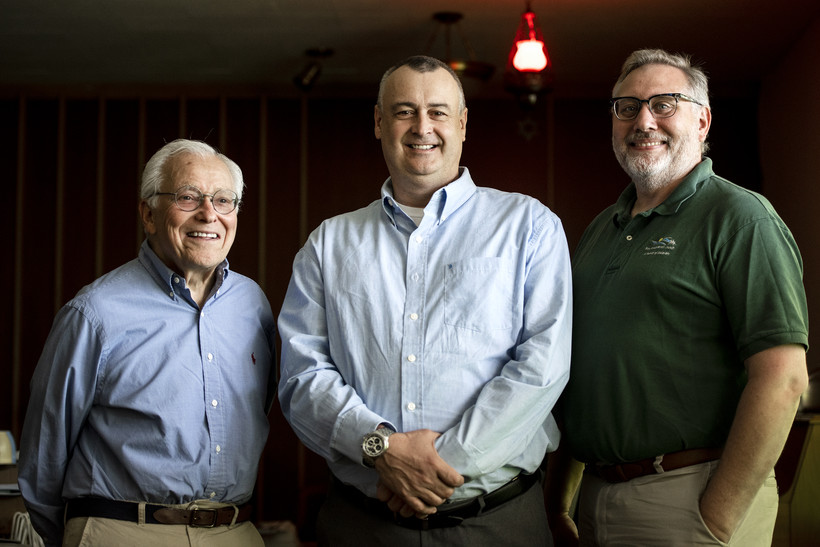 How A Manitowoc Synagogue Will Live On, Even After Closing Its Doors

There’s a plaque that hangs outside the chapel at First Presbyterian Church in downtown Manitowoc. It commemorates another congregation that briefly called the building home.

Anshe Poale Zedek Synagogue was founded more than 100 years ago. It moved into the chapel after selling its building — located right across the street — in 2016. It’s where the congregation held its final service in March of this year. But even though the congregation no longer worships in Manitowoc, that doesn’t mean its story is over.

Bill Schwartz was the synagogue’s last president. At 56, he was the youngest member to regularly attend services. Young people weren’t interested in joining — Schwartz even approached those who held weddings and bar or bat mitzvahs there, he said. And the COVID-19 pandemic caused numbers to dwindle too.

It was rare to achieve a minyan, the quorum required for a full Jewish service. The synagogue even got special permission to recite the Kaddish on anniversaries honoring lost loved ones, Schwartz said. It was also expensive to keep the congregation going. 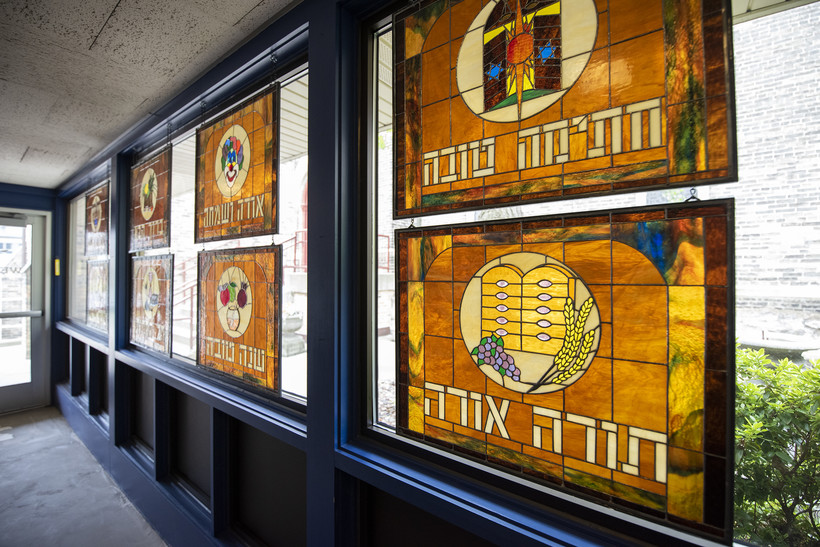 Stained-glass windows that used to be displayed in the synagogue are on display at the First Presbyterian Church in Manitowoc, Wis. Angela Major/WPR

But closing the synagogue didn’t happen all at once. Its leaders, including vice president and longtime member Howard Zimmerman, who had his own bar mitzvah at Anshe Poale Zedek Synagogue 67 years ago, started planning for its future long ago.

"It wasn't just close the door, turn in the key and walk away," Schwartz said.

After all, the synagogue had been in the community for generations. For some, it’s where they worshiped each week. For others, even outside of Manitowoc, it held emotional significance.

Schwartz was with the synagogue for 13 years — a short time compared to those who attended services for decades, he said. Consulting the members was an important step before closing. And then the synagogue took action to preserve its legacy.

It donated its Torahs to other congregations, including one in Africa. A Torah also went to Congregation Beth El in Sheboygan, where Schwartz now attends services. The synagogue in Sheboygan also accepted its yahrzeit plaques, books and menorahs, he said. Its silver is at Jewish Museum Milwaukee. 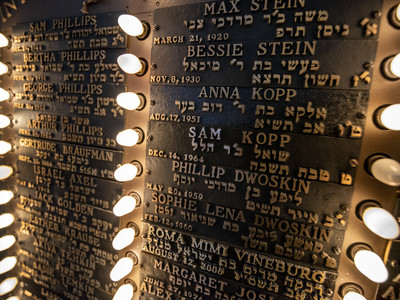 A yahrzeit plaque from the Anshe Poale Zedek Synagogue is kept at Congregation Beth El in Sheboygan, Wis. Angela Major/WPR

Its remaining funds — enough to keep running the synagogue for 20 years, at least — will go to local charities and provide scholarships to students pursuing Jewish studies, Schwartz said.

"That keeps us living for quite a few years, and that's what we want, we want to be remembered," he said.

'The Good They Do Will Continue Forever And Ever'

There were 18 people at Anshe Poale Zedek Synagogue’s final service, Schwartz said. Memories were shared, and Schwartz and Zimmerman thanked those who’ve supported the congregation throughout the years.

But long before the date was set for that last service, the writing was on the wall, Schwartz said. Back in 2012, synagogue leaders contacted the Jewish Community Legacy Project. Noah Levine and his colleagues work with congregations across the country — many in areas that have seen demographic changes — as they prepare for the future.

"We help congregations plan, and we plan according to the issues and needs that they identify and want to have addressed," he said.

Some congregations need help preparing to close. Others want to boost engagement or fundraising. In some areas, the Jewish Community Legacy Project has helped create regional cohorts, so synagogues can plan and share ideas. They exist in Mississippi, Ohio and parts of Pennsylvania. A similar model might work well in Wisconsin, Levine said.

"We can't change the realities of a region, but we can create an environment where Judaism is energized, and the congregations have more resources working together," he said. 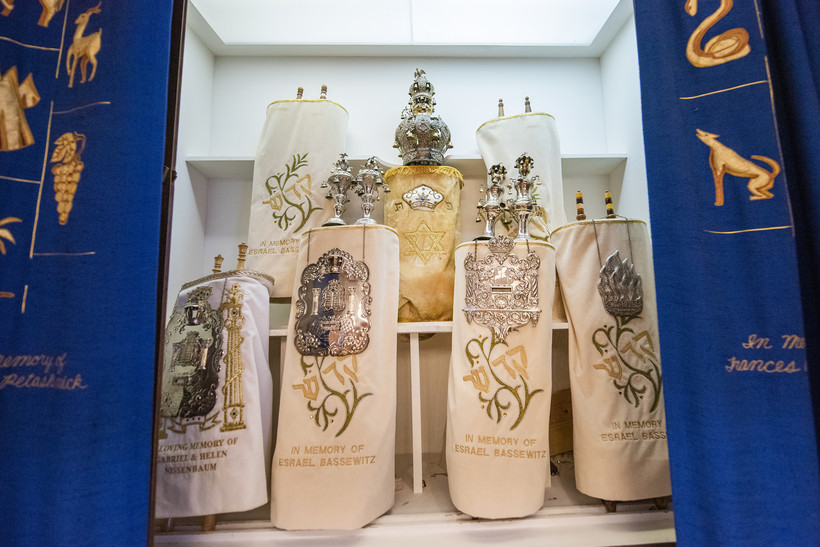 A collection of Torahs are on display at Congregation Beth El in Sheboygan, Wis. Angela Major/WPR

Manitowoc isn’t the only Wisconsin community that’s seen its overall population decline in recent years. And according to Sheila Terman Cohen, author of "Jews In Wisconsin," small towns across the state were once home to thriving Jewish communities. That began to change in the second half of the last century. By the 1960s, most young Jewish Wisconsinites attended universities far from their rural communities, according to Cohen. And many didn’t want to return to small towns.

The proliferation of shopping malls — with the first opening in neighboring Minnesota — also provided challenges for Jewish merchants, according to Cohen. Downtown Manitowoc used to be home to many Jewish stores, Schwartz said. Over the years, many members of Anshe Poale Zedek Synagogue have retired and moved away, he said.

When it comes time for a congregation to close, Levine said, it’s important that there’s a plan in place. In Manitowoc, the work of Schwartz, Zimmerman, accountant Richard Landay and other synagogue leaders will serve to redound the congregation’s legacy, he said.

"Even though the congregation may no longer exist, the good that they do will continue forever and ever," Levine said.

Several pieces of the synagogue’s history will remain at First Presbyterian Church, including the mezuzahs affixed to the chapel’s doorframes and the stained-glass windows hanging outside its doors.

Even though Anshe Poale Zedek Synagogue worshiped in the chapel for a relatively small portion of its long history, the congregation left its mark, said Pastor Matt Sauer.

"We learned how to be better neighbors, how to be respectful. We certainly learned more about the Jewish roots of our own Christian faith. But also, we learned some very real things about the world we live in, such as that they felt the need to have security at their services," he said. "You know, we don't think about that."

Sauer reached out to the congregation to see if they’d like to move in after seeing a "For Sale" sign in its yard. The synagogue and the church were "siblings in faith," Sauer said. After all, the two congregations worshiped across from each other for generations. 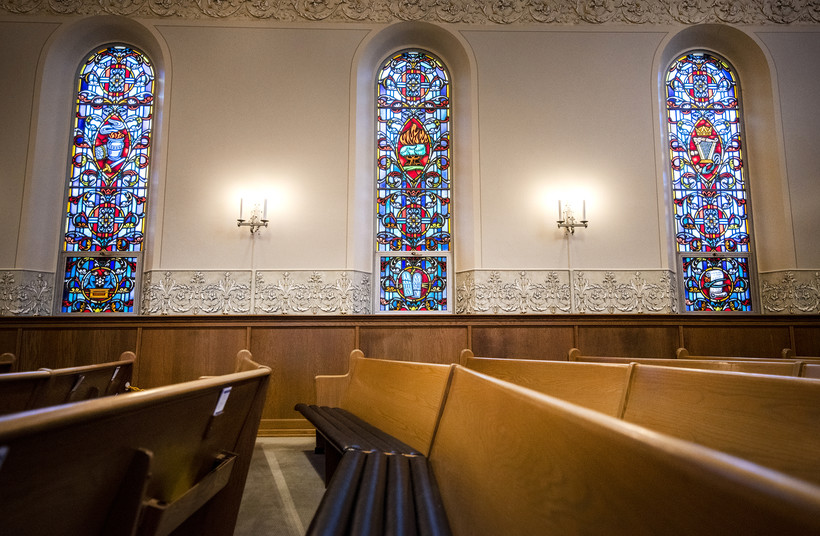 And over the years, First Presbyterian has also felt the effects of changing demographics and worship styles, Sauer said.

In 2017, the church began collaborating with two congregations of the United Church of Christ, a sister denomination. Since then those congregations have combined, with one donating its former building to a local nonprofit called Grow It Forward. Now Sauer serves as pastor of First Presbyterian and the remaining UCC church.

While choosing to give up a building — or even disband — can be difficult, decisions should be made with a congregation’s mission in mind, he said.

"If we're really ... preaching the gospel, the gospel of inclusion and building, to borrow Dr. King's phrase, 'the beloved community,' it means we have to put that community first, as painful as that may be," he said.

For First Presbyterian, its building — constructed in 1870 — has become an important part of its ministry, Sauer said. The church has about 100 members, but the building is used almost every day of the week, with different organizations using the space.

Anshe Poale Zedek Synagogue will help the church continue that practice. While dispersing its assets, the congregation donated to the church that served as its final home. A portion will go to updating the floors in the chapel where the congregation worshiped.

Sauer spoke at the synagogue’s final service, and he said lots of tears were shed that day. But he’s grateful for the time the synagogue spent at his church.

"They gifted me personally with one of their chalices that they would use for their holy days, and that's very meaningful to me as a sign of the journey we had together, and just knowing that the rest of that set is in the Jewish Museum in Milwaukee tells me how meaningful that relationship was for them as well," Sauer said. 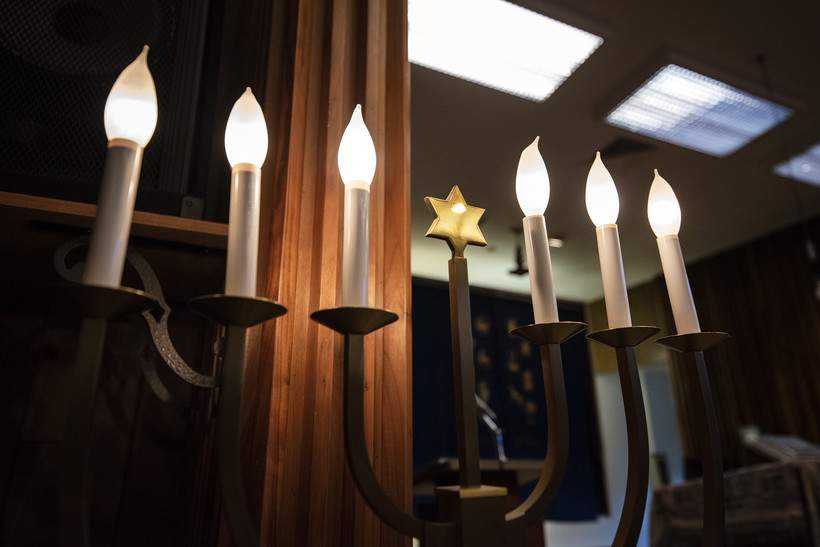 A menorah from the Anshe Poale Zedek Synagogue is kept at Congregation Beth El in Sheboygan, Wis. Angela Major/WPR