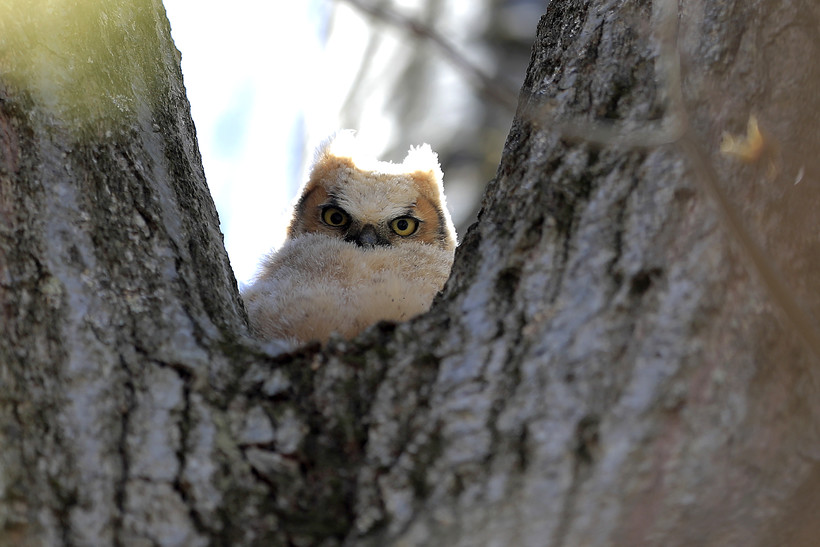 How To Identify 5 Owls Around Wisconsin

The Nocturnal Birds Can Be Difficult To Detect, But There Are Distinct Characteristics You Can Learn
By Mary Kate McCoy
Share:

Over the last few weeks, owl fledglings have been taking their first steps out of the nest in Wisconsin.

Karla Bloem, executive director of the International Owl Center, said she generally marks Memorial Day weekend as the time when baby owls begin to be out and about and flying, but there are still likely a few stragglers.

As night hunters with a range of calls that depend on the season and the situation, owls are often difficult to detect. But while you may not hear or see them yet, they’re out there, she said.

Bloem has clues for identifying distinctive characteristics of five owls you can hear around Wisconsin.

Barred owls are easier to hear than to see. The noisy owls have brown and white feathers, dark brown eyes and are most likely to be found in forests near water in the eastern half of the United States.

"And they also do a scream like a woman being murdered," she said. "If you hear really insane sounds out in the woods in the middle of the night, it's probably a barred owl."

Great horned owls' hoots are deep and soft, but they don't talk as much as barred owls, Bloem said.

"Some individuals are less talkative than others," she said. "And another contributing factor is if they don’t have close neighbors, they’re probably not going to be saying as much."

No bigger than a pint glass, these tiny owls are found east of the Rockies in woods, suburbs and parks.

The best listening opportunities for eastern screech owls are in wooded areas at night — though their name is deceiving, Bloem said.

"Screech owls don’t screech," she said. "Everybody assumes juvenile great horned owls doing their obnoxious begging calls are screech owls because those screech. But screech owls do a soft whinny, and they also do a trill."

About the size of a robin, northern saw-whet owls are the smallest owls in the eastern U.S. They are also generally silent owls, giving a monotonous series of tooting whistles in the late winter and early spring, according to the Audubon Society.

Baby northern saw-whet owls look much different than the adults, which have large round heads, no ear tufts and a white “V” between yellow eyes.

"The babies are just crazy colored, they're like pumpkin-orange on the bellies, chocolate-brown on the head," she said. "They’re totally adorable little things because they're just tiny and so differently colored than other owls."

Long-eared owls tend to blend in, both with their call and their appearance. Their brown and white striped feathers give them a camouflaged look — though their most distinctive feature, the long ears, is often described as giving the bird a surprised expression.

Owlets On The Move 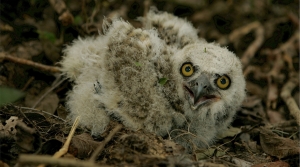 Baby owls are starting to leave the nest. We talk about what to do if you find one and how to make sure owl nests are not disturbed. We also talk about how the International Owl Center is doing and listen to owl calls.