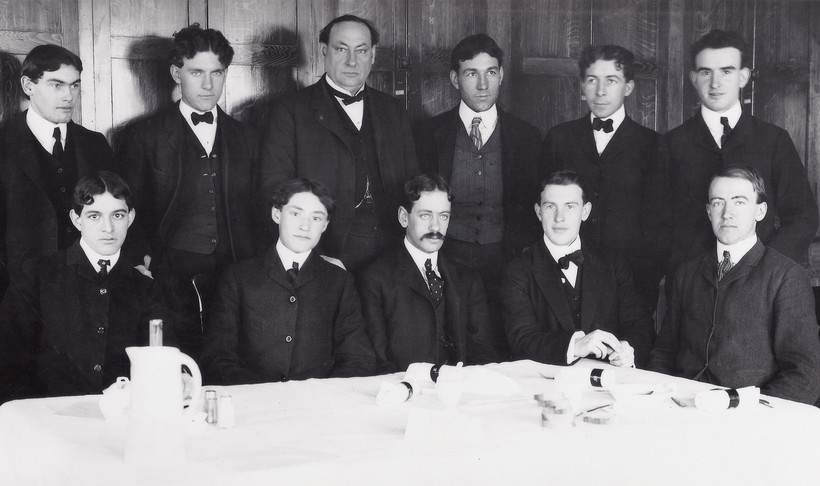 It can seem to consumers that recalls and concerns about food safety are in the news frequently, like the warnings about romaine lettuce tainted with E. coli that have been in the media since 2017.

But the American food supply is much safer than it was a century ago, and that is thanks in large part to a chemist named Harvey Wiley. Wiley's work to test the health effects of common additives, and his push for consistent labeling of processed foods, has had a positive influence on virtually every meal and trip to the grocery store today. His findings in the early 20th century depended on a team of knowing volunteers as guinea pigs.

University of Wisconsin-Madison alum Deborah Blum wrote "The Poison Squad: One Chemist's Single-Minded Crusade for Food Safety at the Turn of the Twentieth Century" in 2018 focusing on Wiley. It was chosen by the UW–Madison as its Go Big Read common book program selection for the 2019-20 academic year.

Blum, an author and Pulitzer-winning journalist, received a master's degree in environmental journalism at UW-Madison and was also professor in the university's School of Journalism and Mass Communication for 18 years, starting in 1997.

"The Poison Squad" has been turned into a documentary film, and premieres on American Experience at 8 p.m. Tuesday on both PBS Wisconsin and Milwaukee PBS.

Rob Ferrett: Let's start with our food landscape. In the late 1800s, there were big changes going on, right?

Deborah Blum: The late 1800s is really the shift from the small farm to the industrialized food supply. And when that starts happening, you see these dramatic changes in what food is, and how it's made, and who decides actually what you're going to eat. It's really a fascinating and also a crazy bad time for food.

RF: Now, this was a Wild West of the food processing industry. To give a taste let's pick a product we love here in Wisconsin: our milk. If I went back to, say, 1880, bought myself a quart of milk. What else is going to be in there apart from the milk?

DB: Oh, you could not have picked a better example than milk. It's so crazy.

So the milk is watered, and with any old water. There was one case where the dairy man just scooped stuff out of the swamp behind his house. Once it's thinned, it's recolored with chalk or plaster of Paris. And they fake the cream sometimes, especially in the Midwest by puréeing calf brains and floating a little scum of yellow on top.

And of course, there's not refrigeration, there's not pasteurization. And because milk rots, they use formaldehyde to preserve it. So, it's also poisonous.

RF: Kids were dying drinking this stuff, weren't they?

DB: That's exactly right. And one of the things that was shocking to me when I was doing the research for my book, "The Poison Squad," was that you can look at newspapers across the country, and they have what they called "embalmed milk scandals" where sometimes hundreds of children die in a single summer from this very "special" milk.

RF: Harvey Wiley, this doctor/chemist/food scientist who becomes kind of a rock star in the country, introduce us to him.

DB: He was so famous that when the 1986 food and drug law finally passed, it was known nationwide as Dr. Wiley's Law.

He blew the whistle on the food supply, but he was also kind of a real crusader, a holy roller of a chemist. He believed totally that it was important that science serve good. And he took food as his cause and made it a life work in ways that literally transformed the country.

RF: And there was pushback from the food processing companies, big companies, influential companies. Can you talk about how they reacted to Harvey Wiley's work?

DB: For the most part, with a few exceptions, the food industry and the chemical industry hated him.

Monsanto was around then. Dow Chemical hated him. Campbell's Soup hated him.

RF: Let's meet The "Poison Squad" now. This amazing story that I hadn't known about until your work. Tell us what Harvey Wiley did to test borax, and salicylic acid, and all these other chemicals in our food supply?

DB: Eventually he got so frustrated with the lack of response that his calls for labeling received that he decided to just test the additives as-is on young, government workers.

And he recruited this group of (12) healthy, athletic young men in their 20s who were underpaid government clerks. And he paid them a big $5 a month, which went a lot farther in 1902. And he offered them three meals a day, seven days a week. The catch is that they have to take these capsules that contain the additive of the day, or the one that he's studying.

So he adds in borax, he adds in salicylic acid, which was a big preservative and beer at the time in the U.S., not in Europe. He adds in formaldehyde. And he just looks at what happens to these guys at different levels as they're swallowing these very standard food additives that everyone in the U.S. is swallowing.

And the thing that shocks him, and then shocks the country, is these very healthy young men start getting really sick.

RF: This is a big part of how he makes the case to the American people. And these Poison Squad guys they kind of become celebrities in and of themselves, right?

You have The Washington Post sending a reporter to skulk around the agriculture department kitchen and try to dig up their back stories. Actually, The Post got so frustrated with the way Wiley tried to control the information, they made up stories about the Poison Squad and that added to their legend.

RF: John, a lot of this stuff you show in the movie, the archival newspaper materials and things like that over the time period you cover, this was a hot topic among the American people, wasn't it?

John Maggio: This is the beginning. We start to see the industrialization of food. We see Nabisco, Campbell's Soup, all of these big food manufacturers coming online. And immigrants, a lot of people moving to the cities to work.

So I think a lot of Italian Americans who were used to living off the land and eating farm fresh food suddenly are being told by Protestant aid groups, "No, you should be eating this canned stuff." I think it really had an effect on them. And it really did so much to shape our food pathways, even to today.

RF: Were you amazed by what people encountered when they bought food or there was milk or canned meat or whatever off the store shelf?

JM: From honey and maple syrup that was nothing but corn syrup, to coffee that was ash and charcoal and dust from the manufacturing floor. Green beans that were just filled with all sorts of newfangled chemical preservatives.

And the push behind all of this was this absolutely fascinating whistleblower.

RF: You also feature some very prominent modern-day food science scholars and activists. Mark Bittman, Eric Schlosser, Marion Nestle, Mark Kurlansky and others. They all talk very passionately about this work. Did you get a sense from Deborah and the others that he was really this pivotal figure in our food history?

You know, Deborah was talking about his process, and there were flaws in his study. This wasn't a perfect study. But what he did was he raised an incredible level of awareness. He was the generator, he was the engine behind this movement.

And what he did, though, was he made a huge tent. He brought in women from the suffrage movement. They were an incredibly powerful voice in helping shape this. But it's a whole host of people, including Upton Sinclair.

I like to say that Wiley had taken the ball to the goal line and Upton Sinclair took it into the end zone with the publishing of "The Jungle," which showed just how bad the situation was in meatpacking plants.

RF: Deborah, I want to wrap up back in the pre-Harvey Wiley era. Sometimes we think of these days like, back in the good old days, that there was some kind of golden age of food. This clearly wasn't it. I think you say in the documentary at some point, basically everybody had stomach trouble all the time in the U.S. given the food they were eating.

DB: And that was a big shock to me because I had kind of bought into that old myth of the happy, pink-cheeked, healthy American eating nothing but wonderful food in the 19th century. And the 19th century is actually known to medical historians as "the century of the great American stomachache."

There are estimates that just your daily diet, just the food you ate and the drink you drank, was one of the top 10 causes of death in the 19th century.

So we are very lucky to live on the other side of this Wiley-led revolution and to live in an era where we do have food safety standards. We are very lucky.

The Poison Squad by Deborah Blum

The Poison Squad: One Chemist's Single-Minded Crusade for Food Safety at the Turn of the Twentieth Century