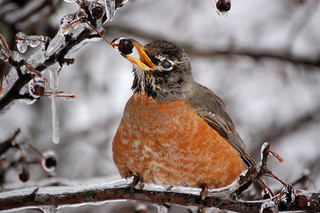 How Birds Survive The Extreme Cold

Many people wonder about wildlife at this time of year and how birds and other animals deal with the extreme cold and snow.

A listener who identified herself as Ann from Madison said she wanted to know specifically where birds go locally to stay warm in extreme weather. Ann noted that for shelter, “small animals use brush piles once in a while when they’re covered with snow.” She added that she will see “squirrels and other little furry creatures going in and out through various tunnels.”  But she wondered specifically about tactics that birds employ.

Scott Craven, an emeritus wildlife specialist with the University of Wisconsin Extension, said that birds have a few possibilities in how to deal with unrelenting below-zero temperatures

To follow up on Ann’s observation about what mammals do, Craven said that, as Ann noted, “a brush pile is a very attractive wildlife feature around someone’s yard or home. And it’s a common kind of weekend project that a lot of the wildlife habitat guides will recommend creating.” That’s in part because some communities have reduced or eliminated brush collection, he said.

To construct that kind of wildlife shelter, Craven said, “If you’ve got a corner of the yard where you’re willing to put it, start out with the largest possible wood stock that you have, even log-like stuff, in a criss-cross pattern. Then, cover it with brush teepee-fashion.”

Craven said that a variety of wildlife will take advantage of a well-constructed brush pile.

“From small mammals to, during the summer, reptiles and amphibians. And the birds will get into that, too," he said.

But as for the smaller birds coming to feeders during the day, Craven said they will find shelter in living evergreen trees and shrubs. At his home, he said, they spend the night in the white fir, arbor vitae and spruce trees. He knows that in part because “if I happen to let the dog out late at night and brush by one of the arbor vitae, there’s a great flapping of wings and birds bailing out in all directions.”

One of the key reasons that the birds seek shelter in evergreens and conifers is to get out of the wind by backing up against the trunk, Craven said.

Cavity dwellers like chickadees will seek out hollows in trees “and pile in,” they’ll also use birdhouses and nesting boxes for roosting. Craven said he’s also seen birds go underneath decks and roost on joists or “anything they can get a perch on underneath the deck and up against the house,” he said.

Overall, birds seem to be skilled at finding the protection they need to survive.

“They find a sheltered spot where they are out of the wind and seem to do OK,” he said.