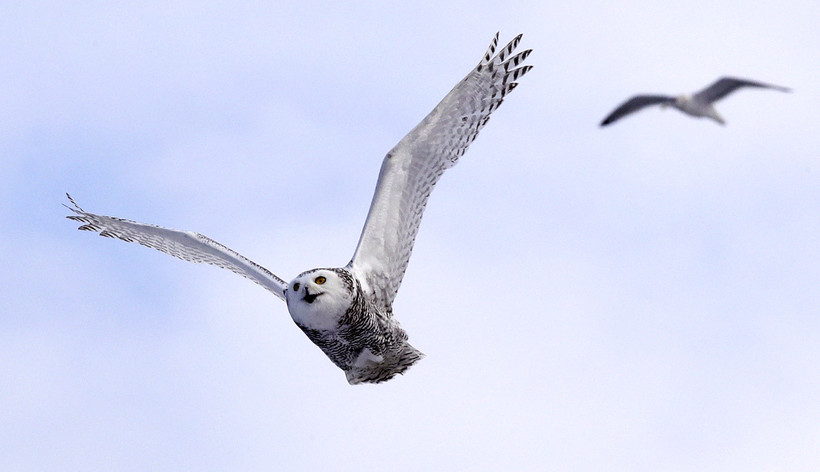 In this Dec. 14, 2017 photo, a snowy owl flies past a seagull after being released along the shore of Duxbury Beach in Duxbury, Mass. Charles Krupa/AP Photo

Hoo Is Back? Snowy Owls Return To Wisconsin

DNR: These Migratory Birds Have Been Spotted All Over Wisconsin
By Elizabeth Dohms-Harter
Share:

More than 20 sightings of the snowy owl across Wisconsin have been documented so far this fall — a white-feathered, yellow-eyed sign that winter is on its way.

According to the bird tracking website eBird, sightings of these striking birds that migrate from the Arctic Circle during winter in search of food have occurred all across the state, from Bayfield County, to Milwaukee and Madison, and in portions of western Wisconsin.

"Literally, anywhere you go, you could possibly run into one," said Ryan Brady, an Ashland-based conservation biologist and the avian citizen science coordinator for the Wisconsin Department of Natural Resources.

The number of snowy owls that show up across the state each winter varies tremendously based on factors like food accessibility and the size of young owl populations. The past two years saw between 50 and 150 owls, but in 2017, the DNR recorded owl numbers in the high 200s.

Snowy owls spend their summers in the Arctic Circle and then head to the northern United States for winter. They're well suited for the cold weather, with lots of feathers and even feathered legs that help protect them from the elements. They're easily identified by their white plumage. A number of them have dark markings, though the adult males are pure white, Brady said, and weigh less than the females. The heaviest of all the owls in North America, snowy owls weigh anywhere from 3 to 6 pounds. 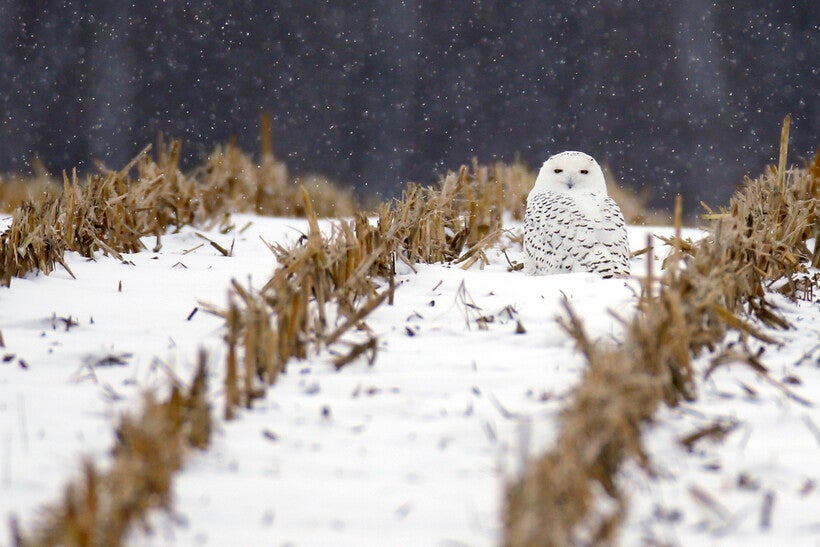 A Snowy Owl sits in the stubble of a corn field as snow falls near Macy, Ind., Wednesday, Jan. 13, 2016. Michael Conroy/AP Photo

Snowy owls like to hang out in open habitats, similar to those in the Arctic, but they can be seen perched in a tree in the woods or on roofs of houses.

Airports are areas snowy owls might frequent because they mimic the open tundra they're used to. Occasionally, this poses conflicts between airplanes and birds, though there are efforts to move birds to safer areas in instances where they're roosting near the runways.

Snowy owls settle in where they can find food, Brady said, and they like to eat small rodents, rabbits, ducks and pigeons, depending on whether they're near water or in cities.

Unlike other owls, snowy owls are active during the day, Brady said. Part of that is because they're from the far north where, during the summer, the sun doesn't set, and they've grown accustom to hunting in the sunlight.

How To Enjoy Them

Snowy owls are unfamiliar with people, so they might be more apt to allow humans to approach them. But Brady said allowing humans that close could also mean they're sick or injured, and getting too close could cause them further stress.

He advised snowy owl watchers keep their distance and enjoy their beauty from afar. You can tell if you're too close if the bird is looking at you often, if it sits erect with its eyes open wide or if it flies away. Resist following it if it flies away, because you could cause it to waste valuable energy trying to get away from you.

Although smartphones can play bird calls, Brady advised against using them because it'll either confuse the bird or flush it out of hiding and protection.

"Give them their space," Brady said. "Park your car, shut it off, stay in one place and kind of watch the owl do its thing in a very natural sort of way."

If you do find one, Brady suggested documenting it on eBird. Brady said while snowy owls aren't endangered or threatened, their numbers are declining nationally and globally, and documenting where they are can help the DNR collect as much data as possible to inform later decisions about the birds.

Users of the website need to set up an account with their first time, and then they're able to post the date, place and any photo or video of the owl.

How To Spot A Snowy Owl In Wisconsin This Winter 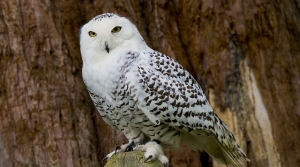 Reports of snowy owls are starting to pop up again across parts of Wisconsin. We look at their migration from the Arctic Circle and how we can best see them.