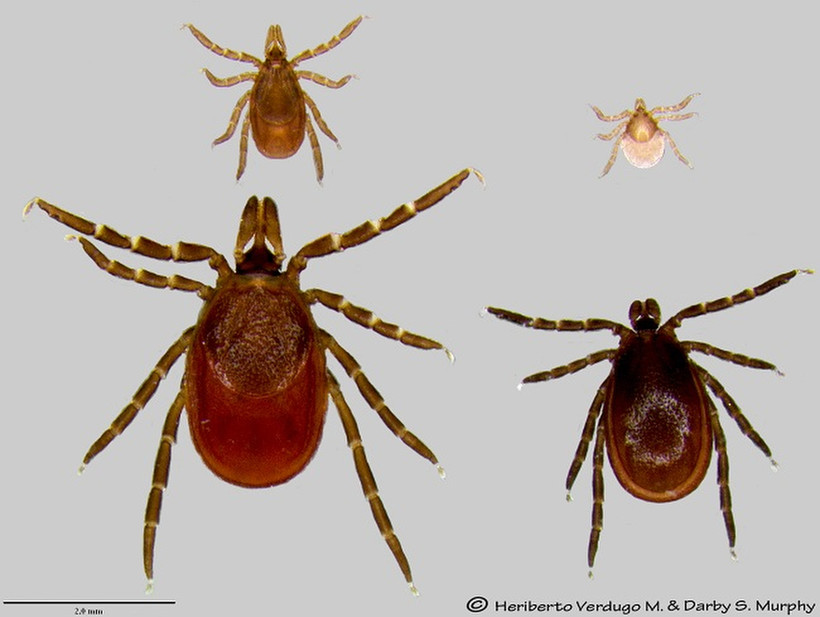 The black-legged tick, or deer tick, is the vector of the bacteria that cause Lyme disease. Deer ticks are present everywhere in Wisconsin where there is forested habitat. Pictured clockwise from top left: nymph, larva, adult male, adult female. Deer ticks have three life stages, the larva becomes a nymph, which then becomes an adult. Courtesy of UW-Madison Department of Entomology

The history of Lyme disease has a Wisconsin chapter. It’s still being written.

From the first case documented by a Milwaukee dermatologist to ongoing research at the University of Wisconsin, the state has played a big role in Lyme disease
By Zhen Wang | Wisconsin Watch
Share:

In 1970, a Wisconsin dermatologist first documented what would soon be called Lyme disease across the country.

Dr. Rudolph J. Scrimenti, a dermatologist in Milwaukee, reported the first case in the United States of the signature rash of early Lyme disease.

The patient had removed a tick from his skin three months earlier in north-central Wisconsin. Scrimenti treated the patient with penicillin based on medical literature he had read out of Europe.

"The patient became symptom-free within 48 hours," he wrote in the journal article in 1970. "There has been no recurrence of symptoms for the past year."

However, Scrimenti said the cause of the disease was uncertain.

Scrimenti, who died in 2013, later began treating patients in Milwaukee and served on the review board of a journal on tick-borne diseases in the early 1990s.

Over the past three decades, Susan Paskewitz, a medical entomologist at University of Wisconsin-Madison, has documented the growing prevalence of ticks in Wisconsin.

Paskewitz found that deer ticks, also called black-legged ticks, have moved steadily from northwest to southwest, and then into the central and eventually slowly into the eastern and southern Wisconsin.

"They invaded our state entirely," Paskewitz said in a 2021 Wednesday Nite @ The Lab episode.

She said the regeneration of forests decimated by logging in the early 1900s and rebounding of the deer population are the main drivers in Wisconsin. Paskewitz said warming temperatures caused by climate change are expected to lengthen the tick season and accelerate their northward march into Canada.

Xia Lee, a tick biologist in Paskewitz’s lab, has studied the insects for more than a decade. Lee is soft-spoken, but when he talks about the parasites, he marvels at their "beauty."

Lee explained that the Lyme-bearing ticks live between two and three years. They acquire blood meals from animal hosts at each stage of life — larva, nymph and adult.

"These guys are always born uninfected, and they have to pick up the infections when they feed on their first animal (hosts)," Lee said, pointing to the lab-raised larvae.

A Yale study has found that about 20-30 percent of the black-legged tick nymphs carry the bacterium that causes Lyme disease in southern New England, while the rate of infected adult ticks is 30-50 percent. The tick can also be infected with other microbes at the same time, carrying and transmitting other pathogens and making people sick with Lyme and other tick-borne diseases such as anaplasmosis and babesiosis.

Once an infected tick latches on a human, it falls off when full. If a tick is removed within 24 hours, the likelihood of transmission is very low, Lee said. However, when a poppy seed-sized nymphal tick firmly attaches itself to the skin, detecting and removing it is difficult, increasing the risk of infection.

Lee noted that Wisconsin never got the proper recognition as the site of the first case of the disease. That honor went to the town of Lyme in Connecticut, which remains one of the states with the highest incidence rates in the country.

"We like to joke about it and say that Wisconsin was actually the first state where Lyme disease was detected," he said, "but we never got the glory for naming (it)."