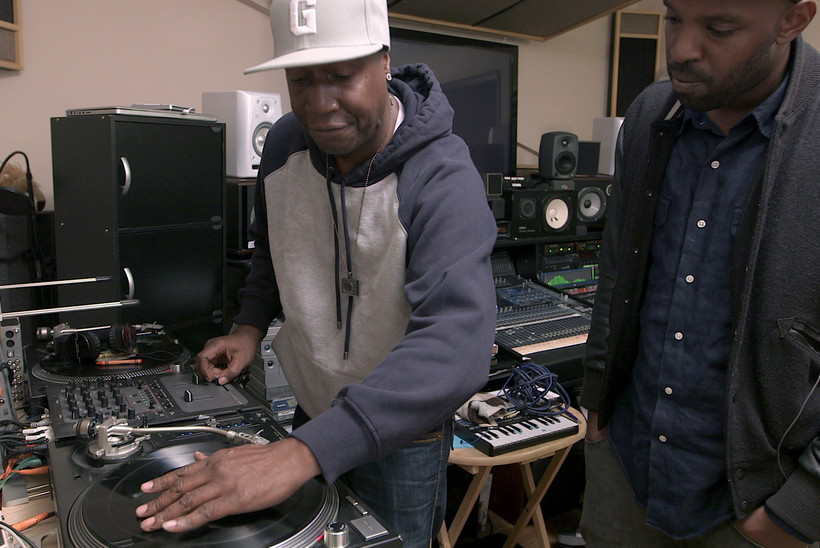 As host of the Peabody Award-winning Netflix documentary series, "Hip-Hop Evolution," Shad Kabango has had conversations with the architects, innovators, luminaries and legends of hip-hop.

An award-winning emcee himself, he confesses to WPR’s "BETA" that he’s a bit star-struck when sitting down to interview his hip-hop idols.

"But, the cool thing is, I don’t feel like I have to hide my inner fanboy, because they’re human beings too and they’re also amazed and surprised and delighted to do such special things," he said.

The Birth Of Hip-Hop

That human element is front and center as Shad explores the evolution of the uniquely American genre and traces its timeline all the way back to August 1973. A teenage Clive "DJ Kool Herc" Campbell threw a party for his sister in their apartment building at 1520 Sedgwick Ave. in the Bronx, which is considered hip-hop’s "Big Bang" moment.

"He was playing the sections of records that they called 'breaks;' a breakdown of drums and bass, some funky kind of percussion," Shad said.

The innovation came from Herc having two copies of the records he played. He’d pick the needle up and place it back at the beginning of the "break" on one record as the other continued to play, creating a repeating loop of music Herc called the "merry-go-round."

The records were funk, soul and reggae, providing an alternative to the dominance of disco. As Shad explained, "You could call James Brown really a godfather of hip-hop, because his break beats are so fundamental, foundational to the music."

Herc is part of an accepted trinity of early DJs credited with the birth of hip-hop, which also includes Afrika Bambaataa, who’s credited with "bringing this sort of ethos of hip-hop being about unity, knowledge and empowerment," Shad said.

Then there’s Grandmaster Flash, who Shad describes as "The real technical innovator, because what he did, was he made that whole looping thing with the break beats super smooth."

In the documentary, Grandmaster Flash said, "Most DJs concentrated their efforts on the tone arm. It’d be totally sloppy, off beat. I knew there has to be a better way, and after trying many different things, I placed my fingers on the vinyl. I let it go ... stopped it. Let it go ... stop it. I said to myself, 'I have absolute control of the record.'"

In the early days of hip-hop, it was all about the DJ. The person with the microphone — the emcee — was just there to hype up the crowd. That soon evolved into couplets and short rhymes, expanding in to crews of multiple emcees with increasingly elaborate routines. But hip-hop was still considered spontaneous and ephemeral — to be experienced in the moment.

"Hip-hop at that time was a spontaneous thing," Shad said. "A lot of the people at the forefront at that time in the Bronx and in Harlem; they didn't really imagine this being something you could capture on record."

That all changed in 1979 when producer Sylvia Robinson gathered three kids from New Jersey in a studio to rhyme over the groove from Chic’s "Good Times." The result was "Rapper’s Delight" by The Sugarhill Gang, and it exposed the world outside New York City to hip-hop, selling millions of copies.

But the members of The Sugarhill Gang stole many of the song’s lyrics from well-known New York emcees, who’s parties they had attended. Shad reveals that Grandmaster Caz, who’s considered one of the greatest emcees ever, wrote more than a third of the song.

So, what did New York emcees think of the track?

"They hated it," said Shad. "They really, really hated it."

In the documentary, Caz himself sounds off about "Rapper’s Delight."

"I mean, what are they doing to our art form, you know what I mean?" Caz said. "It’s like, this is the first introduction that people get to what we do? To what we been doing for like seven years?"

The hip-hop of the 1970s was party music. However, that perception began to shift in 1982 with the release of Grandmaster Flash & The Furious Five’s "The Message."

"'The Message' spoke to what was going on in the community in a really frank and poetic way," Shad said.

With legendary Melle Mel lyrics like, "It’s like a jungle sometimes, it makes me wonder how I keep from going under," and "Don’t push me 'cuz I’m close to the edge. I’m trying not to lose my head," hip-hop expanded its pallette.

The Golden Age Of Hip-Hop

As the 1980s progressed, hip-hop entered what many refer to as the "Golden Age" of the genre, producing new sounds and superstars at a staggering pace. Run DMC, who are described in the documentary as "The Beatles of Hip-Hop," were among those leading the charge.

"They were the first real hip-hop stars. Firstly, because of the big records that they had, but also because of their style," Shad said. "They dressed the way people dressed in the streets. They really carried that whole aesthetic."

Beyond Run DMC, groups like Eric B. & Rakim, De La Soul, A Tribe Called Quest and Public Enemy, brought new sounds and aesthetics to hip-hop that dramatically expanded the possibilities of the genre.

Public Enemy burst onto the scene in 1988 with their sophomore album, "It Takes a Nation of Millions To Hold Us Back," featuring a ferocious production style, powerfully political lyrics delivered by Chuck D and his big, booming voice and a militaristic stage presence that added up to a group Shad refers to as "a game changer."

Meanwhile, Los Angeles was forming its own identity with the explicit, hardcore "Gangsta Rap" of groups like N.W.A.

"That was absolutely the product of the realities in Los Angeles of gang life there, and police brutality there," Shad said. "And it spoke to that stuff with a frankness and with a sonic heft that people hadn’t heard before."

In Miami, the music adopted a bass-heavy dance club feel with groups like 2 Live Crew.

Artists in the south like The Geto Boys featured a southern drawl and elements of soul and gospel that hadn’t been heard before.

In Oakland, Digital Underground were acolytes of the slick 70’s funk of Parliament Funkadelic, and Paris displayed a social consciousness rooted in the city’s Black Panther tradition.

The Women Of Hip-Hop

Artists like Salt-N-Peppa, Queen Latifah and MC Lyte were noticeably absent from the first season of "Hip-Hop Evolution," and the series has received criticism for not featuring the contributions of women.

"Not that we didn’t try, but we weren’t able to land some interviews with some of the major women that were there. That was huge failure of the first season," Shad said. "Women have been around since the beginning of hip-hop in the earliest crews and that should have been represented in season one, and it’s represented a bit more in season two."

The two seasons of "Hip-Hop Evolution" are now streaming on Netflix.