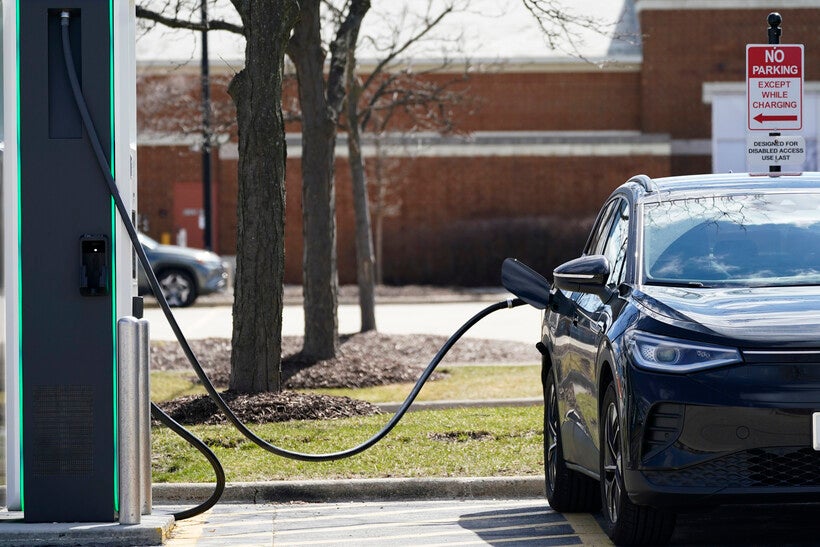 An Electrify America Charging Station for electric vehicle is seen at Woodfield Village Green in Schaumburg, Ill., Friday, April 1, 2022. A wave of new electric vehicle charging stations across the country is coming as interest in alternatives to gasoline-powered vehicles is on the rise and could heighten further due to a global spike in gasoline prices. Nam Y. Huh/AP Photo

But getting more electric vehicles on the roads will be a 'glacial movement,' car dealer predicts
By Diane Bezucha
Share:

Gas prices are climbing to record highs in Wisconsin and across the country, and that has more drivers considering turning to electric vehicles. But the price of gas is just one part of the equation, industry experts said, and won’t necessarily translate to more electric vehicles on the road.

Interest in electric vehicles has been on the rise after a decade of slow growth. Electric vehicle sales in the United States increased 60 percent in the first quarter of 2022. And that’s after nearly doubling from 2020 to 2021. In Wisconsin, there were 7,521 electric vehicles registered as of July 2021, up 22 percent from 2020.

CEO of Zimbrick dealership locations in southern Wisconsin, Tom Zimbrick said prospective electric vehicle buyers are motivated by the rising cost of gas but also by reducing their carbon footprint and by the increased selection of electric vehicles.

"There is an increased awareness and increased curiosity, I'll say, for electric vehicles," Zimbrick said.

Similar to Zimbrick, Bill Sepic said it comes down to choice. Sepic, president and CEO of the Wisconsin Automobile and Truck Dealers Association, said more manufacturers are investing in electric vehicles and there are simply more options on the market now.

"When you can get anything from a sports car to a luxury car to an economy car to a pickup truck, that gives you a whole lot more choice than what used to be out there. And so that has driven interest," Sepic said.

But for some hoping to get their hands on the steering wheel of a new electric vehicle, blockades are popping up.

For one, electric vehicles use specialized materials — lithium, cobalt and manganese, for example — which are facing even more supply chain bottlenecks than internal combustion vehicles.

"So you have consumers wanting to try out the product and it's not in the showroom because they're selling as fast as any new vehicle is selling," Sepic said. "Trying to get your hands on one is certainly a challenge."

Another barrier in the shift to electric vehicles is access to charging stations.

That barrier was cleared for Milwaukee resident Kennan French, who bought a white Mustang Mach-E in October. His biggest concern in getting a new vehicle was impact on the environment, and purchasing an electric vehicle fit well with his employer’s recent installation of eight charging stations at his place of work.

He said he probably would have held off in buying a new vehicle, but he ended up purchasing his after the charging stations were installed, saying, “It was a good nudge to make me think more about it. And made it a lot more convenient."

French mostly uses the vehicle for making the 25-mile round trip drive to and from work. Because he can’t charge the car at his apartment, he charges at work every two to three weeks.

"It's a little bit more often than I would fill up with gas," French said. "On the other hand, it's free energy from my employer."

"I don't want to be sitting out on the interstate and stop traffic with a car that's almost out of charge," Sepic said. "I can run a gas can out to you and you can start your car back up and get moving. I can't run a charger out to you."

But investments in electric vehicle usage are on the horizon, and Wisconsin is slated to expand its electric vehicle charging stations over the next five years with nearly $79 million from the federal bipartisan infrastructure law.

That’s now stoking concern about how electric vehicle owners will charge vehicles if rolling blackouts upend the electrical grid as projected this summer. And, it’s causing some to question what will happen when patrons are asked to pay for the energy they retrieve from charging stations.

"Right now almost every charging station is offered at no charge. That's going to change quickly," Sepic said. "Everybody thinks electricity is free, but somebody's paying for it and they can't pay for it forever."

To some extent, that could be driven by President Joe Biden’s ambitious goal for half of all new vehicles sold to be electric, hybrid or fuel cell electric by 2030.

The recent surge is somewhat relative. Electric vehicles account for only about 4.6 percent of vehicles on the road. And Zimbrick said complete transition will be a slow process. On average, most people replace their car every 10 years.

"If you think about that, it's going to take a long time for the car count to switch from internal combustion engines to electric engines," Zimbrick said. "Absent a lot of government intervention, it's really more of a glacial movement than a seismic movement."

Still, he said their company wants to make the investment in electric vehicles. Zimbrick currently offers 21 different eclectic vehicle models from 16 brands. And despite the growing pains that may come with it, he thinks many dealers feel the same way.

"We're believers. We pretty much think this is the way of the future," Zimbrick said. "We are all in."