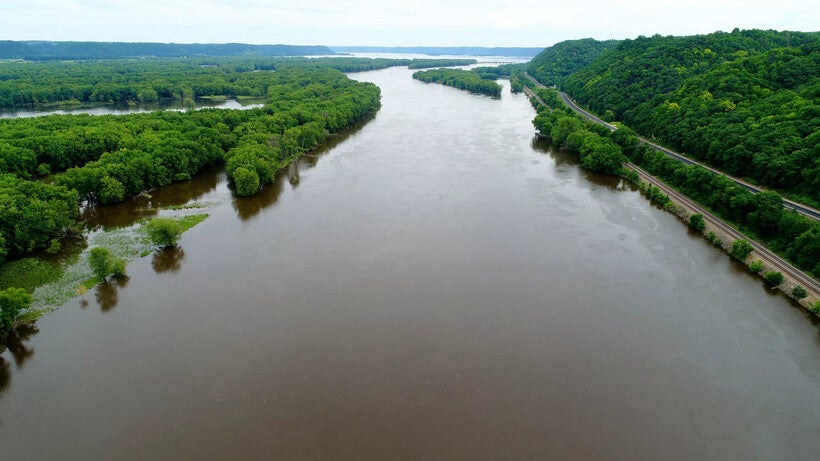 The Mississippi River flows through Prairie du Chien, Wisconsin, just above its confluence with the Wisconsin River, in 2019. Increased flooding in the Upper Mississippi has led to changes in the fish and plant life in and around the river, a new report shows. (Mike De Sisti, Milwaukee Journal Sentinel)

Nearly 30 years of data show increasingly wet conditions in the floodplain that runs from Minnesota through Wisconsin and Iowa to Cairo, Illinois
By Madeline Heim | Milwaukee Journal Sentinel, WisconsinWatch.org
Share:

High water and longer-lasting flooding are changing the habitat along the Upper Mississippi River, according to a new report analyzing nearly 30 years of data.

The upper basin is the natural floodplain that spans from Minnesota through Wisconsin and Iowa to Cairo, Illinois. It’s an ecologically diverse area, consisting of wetlands, marshes and forests.

The report, released last week, shows increasingly wetter conditions in the Upper Mississippi over the past few decades, a trend that — spurred by climate change and land-use practices — looks likely to continue.

Kirsten Wallace, executive director of the Upper Mississippi River Basin Association, said the findings are a good start to understanding what has impacted the river habitat.

"Clean water management techniques that we’ve put on the landscape have worked," Wallace said, but "the changing climate and changing hydrology makes the future unknown even though we have these long-term trends."

Other organizations study and publish reports on the river, such as America’s Watershed Initiative, which issued a C- grade for the health of the entire basin in its 2020 report card, citing environmental pollution, runoff from farmland and ongoing funding needs for aging locks, dams and ports.

Wallace said this report can help people understand how the river has changed in different places over time.

Previous reports were released in 1998 and 2008. But the new analysis — spanning decades and examining more than 800 miles of river — can provide a clearer long-term picture, said Jeff Houser, a USGS research ecologist and science director of the long-term resources monitoring program.

"By having a long-term data set over a lot of space, we can really begin to understand many aspects of (the river's) changes," Houser said.

Here is a look at some of the report's key findings.

Higher discharge, or put simply, more water running through the river, was the most widespread change observed throughout the Upper Mississippi River system, the report's authors wrote.

Climate change — which is causing heavier rainfall, more snow and higher temperatures — as well as land use practices and built constraints like levees all likely play a role, according to the report, though it's not entirely understood how much each is contributing.

The upper Midwest is projected to get wetter into the future, particularly during winter and spring, according to the report. And along the river, an increase in surfaces that are impervious — meaning they don't allow water to seep through and soak into the ground — is forcing more water into the river and its tributaries.

Levees and floodwalls that have been built to prevent flooding have also cut off many wetland areas from the rest of the ecosystem, decreasing ecological diversity. This is more of a problem in the lower portion of the upper basin, in Missouri, Illinois and Iowa, where at least 50% of the river is constrained by levees.

Most sections of the Upper Mississippi River lost forest cover over the last roughly three decades, largely due to flooding and invasive species, the report found.

Trees along the river are used to some flooding, but when their trunks and roots are submerged for long periods, they suffer and sometimes die, Houser said.

When the trees die, invasive species move in, such as reed canarygrass and Japanese hops — both of which grow so rapidly they can suppress the growth of new trees. The emerald ash borer is also threatening green ash trees, one of the more abundant species in the floodplain.

Researchers are exploring ways to protect floodplain forests, but Houser said it may be easier to focus on controlling invasive species than addressing tree loss from excess flooding — which could happen more frequently in the future as the planet warms.

One stretch of the upper river, between the Missouri and Ohio rivers, bucks this trend. More trees are growing in the floodplain, and Houser said they’re not sure why.

Typically, the more water drains off the land, the faster it flows. Houser said that usually carries more sediment and nutrient runoff from farm fields, which can kill plants in the river and ultimately contribute to the Dead Zone, the low-oxygen area at the mouth of the river in the Gulf of Mexico.

But in the upper stretches of the system, the picture is more complicated: aquatic plants are thriving and water clarity has improved despite higher discharge. There was a small but significant decrease in total suspended solids, particles — like sand and dirt — in the water, and a decrease in total phosphorus, which tends to stick to those particles. 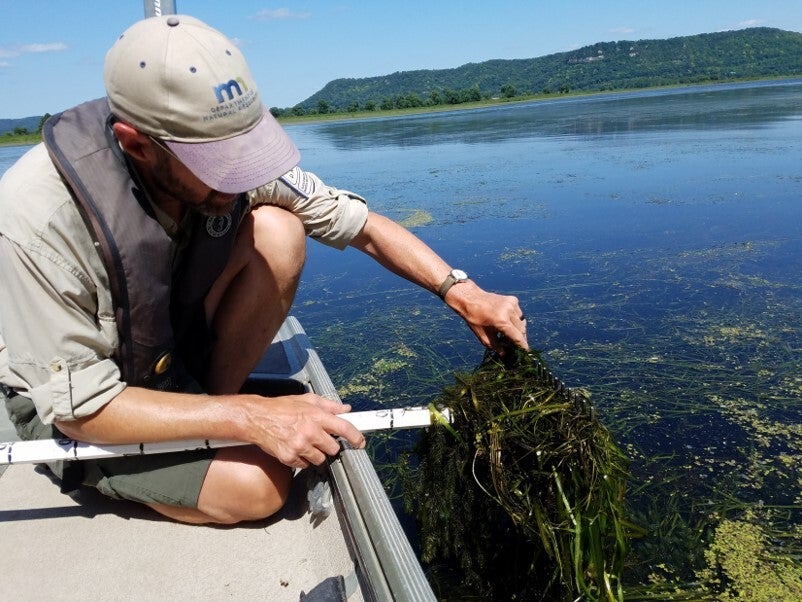 There are many state and federal programs working to reduce farm runoff throughout the upper Midwest, and the findings may illustrate that some of those efforts are working, Houser said. Aquatic plants, which have rebounded following a widespread loss in the 1980s, can also slow down water velocity and help sediment settle. In turn, clearer water allows sunlight to reach plants and promotes growth.

"It seems that the vegetation itself is helping to further clarify the water," he said.

Farther down the river, aquatic vegetation is more scarce. And even with the observed decreases, runoff concentration still exceeds U.S. Environmental Protection Agency benchmarks, according to the report.

Silver carp and bighead carp, which were first identified in the Upper Mississippi River in the 1990s, now represent up to 65% of the fish in three of the southernmost study areas. 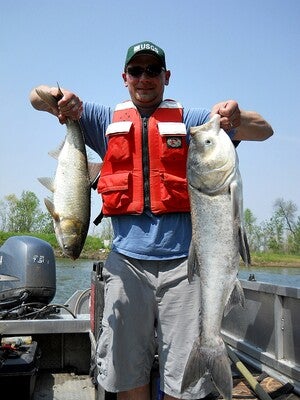 They're more efficient feeders than most native fish and also eat plankton, which all young fish eat and some fish eat their entire lives. Thus they can clear much of the food out of the water directly in competition with other fish.

Invasive carp are "prolific reproducers" that can breed many generations of fish in a year, Houser said.

Popular sport fish species have declined in the lower portions of the system, as well as forage fish, which represent the middle of the food chain.

It's unclear whether invasive carp will be able to take hold in the upper stretches of the river, where they've been found but have not yet begun to dominate, Houser said. Some environmental advocacy groups have pushed for a sound barrier to be installed in the water farther upriver to discourage carp from getting through. 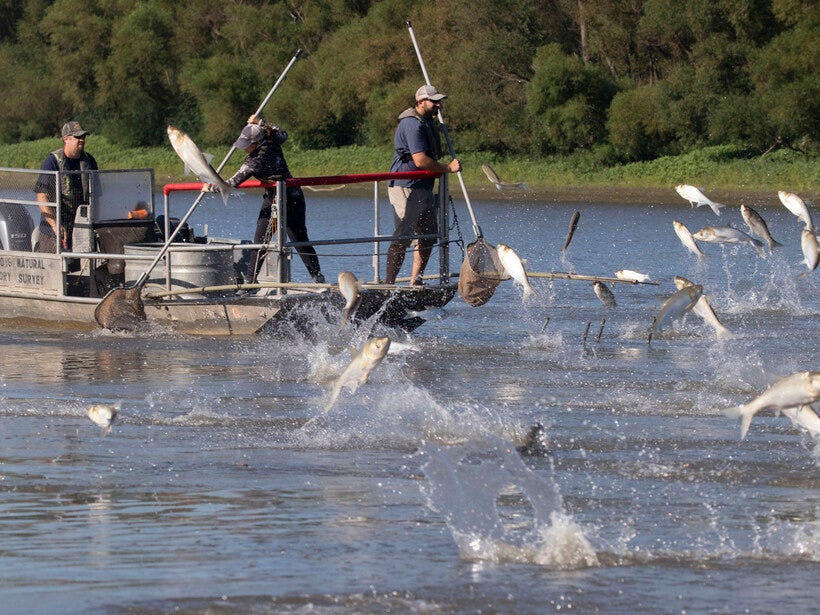 This article first appeared on WisconsinWatch.org and is republished here under a Creative Commons license.