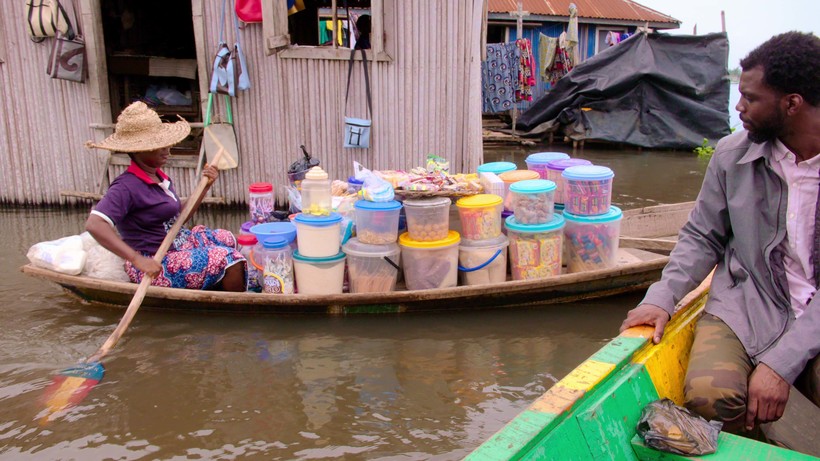 'High on the Hog': A culinary journey from Africa to America blends history and cuisine in compelling docuseries

Book turned Netflix series is 'a tale of the origins of African Americans, as told through food,' says Stephen Satterfield
By Steve Gotcher
Share:

Stephen Satterfield is standing at the Door of No Return in Ouidah, Benin, a place where enslaved people were forced onto boats for a journey to America and a life of enslavement. Tears well up as he contemplates the fate of his ancestors who stood in that very spot 400 years ago. Ouidah is a seemingly strange place to visit for a television show about food.

But the documentary series is about so much more than food.

Satterfield talked with WPR's "BETA" about why the series was created.

"I was just fortunate to be a part of a larger vision of adapting a very important and renowned text into a television series. 'High on the Hog: A Culinary Journey from Africa to America' was originally written about 10 years ago by Dr. Jessica B. Harris, food scholar and historian," Satterfield explained. "It's really a tale of the origins of African Americans, as told through food. So, we take a journey that begins in Benin, West Africa across the Atlantic to Charleston and so on moving chronologically through the series, as we do through the Black American experience."

As the documentary unfolds, we learn that so many of the foods we take for granted as American cuisine originated in Africa and came over to this country with enslaved people. Those foods were cultivated here in this country by those people. Without their skill and knowledge about how to grow and prepare them, they likely would not have become a part of our food culture.

"And I think the thing about the rice — in particular Oryza glaberrima, which is derivative of West Africa, the famous Carolina Gold rice that we learned about — it's not just that it was a culinary delicacy. It's that it was an economic boon for the United States," Satterfield said. "This was the most coveted and the most well-known rice in the entire world. And so, in order to take a grain and turn it into a profitable commodity, you really need culinary know-how, yes, but you need agricultural know-how as well."

The enslaved people possessed the expertise to grow that crop, and once slavery ended, rice production plummeted because no one else knew how to cultivate the crops.

As the series moves from Benin across the Atlantic, and then from Charleston to Texas, there are stops along the way that reveal the rich and mostly unknown history of Black Americans through the foods they prepare and the ingredients they use. The effect is eye-opening at the neglected history that is revealed but also the joy and celebration that comes with the understanding of one’s background.

"The things that you see on the screen as far as me convening and breaking bread — that is as real as it gets," Satterfield said. "We haven't really seen anything like 'High on the Hog' on food television. I really was so in awe of the experience, not only as someone who got to partake in it, but just as a unique offering in the space.

"And I really hope that it is indicative of the direction we're going because I think there is a lot of richness and context and nuance that we're able to garner when the host has a kind of cultural connection to a place. But having a Black production crew and having a Black host and having the material really move through someone who has lived the Black American experience makes for an authentic and emotionally powerful moments."

The second season of "High on the Hog" is now in the planning stages. Satterfield said that the narrative will still follow the text of the book and continue the story of African American history and food across the U.S.